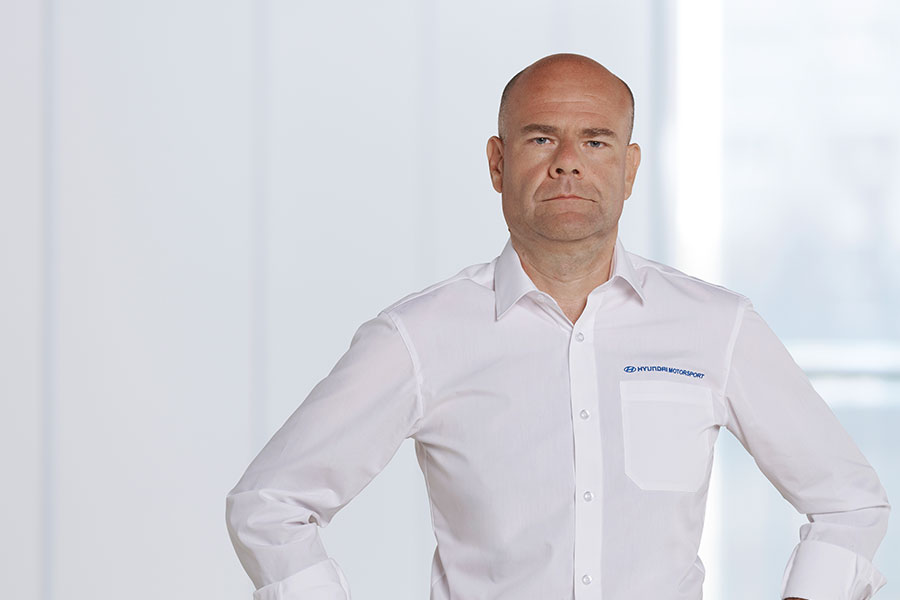 Italian Andrea Adamo was appointed to the helm of Hyundai Motorsport GmbH in January 2019, having spent three years establishing the company’s successful Customer Racing department. As Team Principal, Andrea oversees all motorsport activities from the company’s Alzenau factory, including WRC and ongoing development of the i20 R5, i30 N TCR and Veloster N TCR cars for customers around the world.

What did Hyundai Motorsport’s first title mean for you?
“We have added an historic WRC title to our inaugural WTCR title in 2018, which our customers also successfully defended in 2019. We’ve shown that we are all team players unified by a clear objective of delivering results for Hyundai. With our WRC, Customer Racing and electric racing programs coming together under one roof, we are starting to show that Hyundai is a true force in motorsport.”

How did you first become interested in motorsport?
“My father worked in the industry so it was an environment that surrounded me while growing up. At around 14 years of age, I decided that I wanted to be a motorsport engineer. I attended technical school before going on to study engineering in Turin.”

What was your career path before joining Hyundai Motorsport?
While I was a student, I was already co-operating with Abarth on rallying and racing. I was then a junior aerodynamicist in the DTM days before starting to work in super touring. I was a race engineer in Italian and Spanish championships with super touring cars. I was with FIAT Group until 2008 when they decided to reduce their motorsport activities. I then became a consultant working for many companies, including a Lotus rally car project, as well as N Technologies until 2012 when I moved to Honda Racing to work on WTCC until 2015. At the end of that year, Hyundai Motorsport contacted me and the time was perfect for a new challenge.”

How did you set about establishing the Hyundai Motorsport Customer Racing department?
“When I joined in December 2015 there were just three of us, and the focus was firmly on the R5 program. We had to create the entire department from scratch, building and developing a car, and growing a customer base in a short space of time. It was an ambitious, tough target but we achieved it. Since then we’ve added a successful TCR project, which – alongside WRC and R5 – is helping us to create a strong reputation for the Hyundai name in global motorsport.”

How would you describe your approach as Team Principal?
“I believe in the common determination. I believe in common targets. I believe to share visions, to share decisions, to explain why decisions are taken and to give everyone the tools to understand where we are going and to let him justify himself why he’s working so hard. Then I don’t know if it is team spirit, things like that, these big words and definitions to people that are maybe not working a lot and just bringing up ideas how to manage a company, but I think that most of the people that know how to manage a company have never managed a winning company.

My approach is a mix of past experiences. Sometimes you have to have the feeling, to grab the moment or decide like the flip of a coin, driven by your gut -these decisions are normally the best ones. Of course in these cases you have a big queue of people telling you which is the right thing to do, but at the end there are moments in life when you are alone and you have to pay for the mistakes you have made yourself. I always say that as a team, we win, but I lose and that was my approach to everything from day one.”

Where are the team’s strengths?
“When I arrived, I found everything done basically, so I just simply managed what I had and I think I found very good ingredients to win in WRC. There is nothing lacking compared to our rivals. We are right up there in terms of our engineering capability, we are arguably the strongest in terms of our crew line-up. I am confident we have the package to win.”

Emotions run high during WRC events. Andrea and our drivers reflected on those moments – and the famous Adamo hug – in this episode of our Back/Stage documentary.