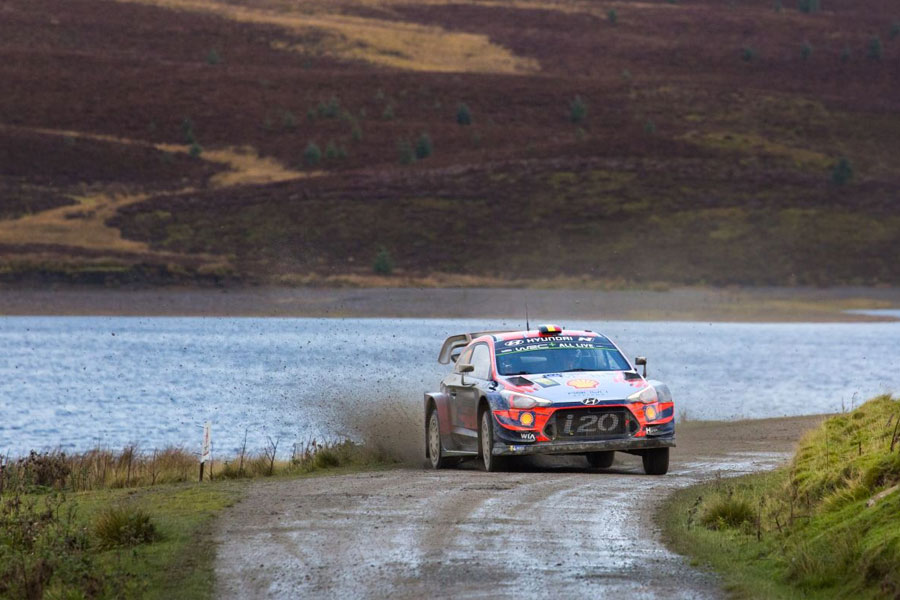 A wet and muddy weekend at Wales Rally GB has seen us hold onto a slender lead in the manufacturers’ championship following a hard-fought second place for Thierry and Nicolas.

Our Belgian crew kept the pressure on eventual rally winner Ott Tänak right to the final day, ending a challenging rally just 10.9-seconds adrift. The result marked our 11th individual podium of the season and equalled our best-ever result in Wales.

“We could not have given any more,” said Thierry. “From the very first stage, it was a tough fight in some tricky conditions – and incredibly close. We can be happy with our own performance but I’m disappointed about the final result.”

Top of the mountain

Thierry and Nicolas claimed a total of three stage wins over the weekend, including a 1-2 with Andreas and Anders on Friday’s Slate Mountain.

Our Norwegians claimed a win of their own on a strong Saturday afternoon, as they fought with local Welsh hero Elfyn Evans for fifth. They would finish sixth after a disrupted Sunday schedule, which saw the cancellation of the Great Orme stage.

“Our aim was to defend fifth place from Elfyn, but unfortunately it wasn’t to be,” said Andreas. “Sixth place might not score as many points as we would have liked, but at this stage of the season they are all extremely valuable.”

Up and over, not down and out

It was a turbulent Welsh weekend for Craig and Paul. Starting the weekend with some impressive times, the Irish crew had a lucky escape on Saturday when they rolled their i20 Coupe WRC in the Myherin stage. Thankfully, they were unharmed and could keep the car going, but a cracked windscreen hampered their progress.

“Saturday was really disappointing,” admitted Craig. “Without that mistake I think we could have been fighting at the front. It has been a pleasure to be part of this rally with the Hyundai Motorsport team, with a fantastic car and on the incredible Wales Rally GB stages. We might wonder what could have been possible results-wise, but whatever has happened it’s certainly given me a lot of motivation.”

Our title lead has been reduced to just eight points but with 86 up for grabs at the next rounds in Spain and Australia, it’s all still to play for. Our Team Director Andrea summarised: “We complete Wales Rally GB with another podium and still leading the manufacturers’ championship. I can’t say we are happy with the overall result but being top of the standings will give us more commitment, if any more were needed, to be stronger in the final rallies.”

The penultimate round of the season takes place October 25-27 on the mixed gravel/tarmac surfaces of Rally de España.

2019 FIA World Rally Championship for Manufacturers’ Standings
After round 12

2019 FIA World Rally Championship for Drivers’ Standings
After round 12