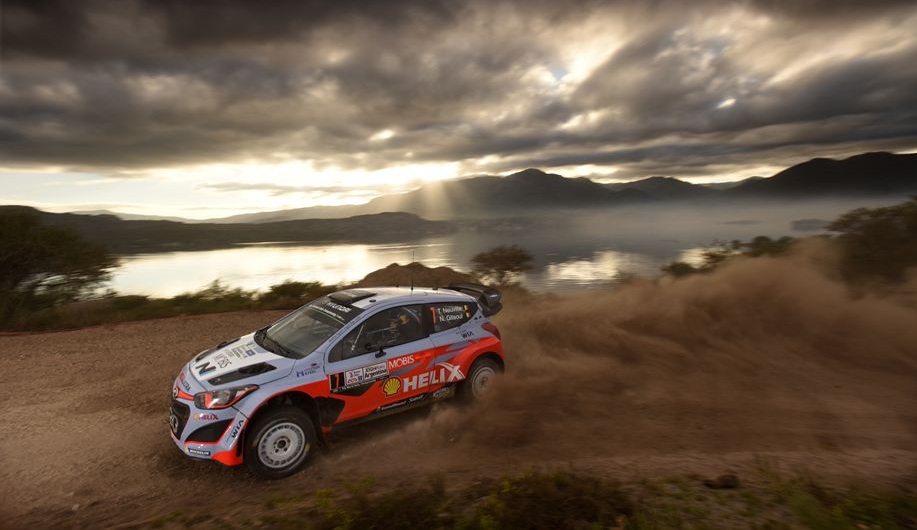 April 25, 2015  Thierry Neuville is the highest placed Hyundai Motorsport driver at the end of Saturday’s four stages in Rally Argentina after the Belgian had a trouble-free day in his #7 Hyundai i20 WRC.
It was a tough day of rallying for the Hyundai Motorsport team as technical problems halted Dani Sordo’s competitive Saturday in the final stage, and an off-road incident in SS9 (Capilla del Monte  San Marcos) ended Hayden Paddon’s day in the #20 Hyundai i20 WRC.

Neither Paddon nor his co-driver John Kennard were injured in the incident, however six spectators were injured and received immediate medical attention at the scene. Those involved have since been taken to hospital for further medical checks and treatment. Thankfully their injuries are not thought to be life-threatening.

The team extends its thoughts to those involved in the incident, and is liaising with the rally organisers to understand precisely what happened. It is expected that Paddon will continue on the final day of the rally.

Team Principal Michel Nandan commented: “Naturally, our first thoughts go to the spectators who were injured after the #20 Hyundai i20 WRC left the road in SS9. Thankfully, they have been treated very quickly by the authorities on site. We are in contact with the FIA and rally organisers to determine precisely what happened.

Dani had been on a strong run throughout today, showing competitive pace in the #8 Hyundai i20 WRC, and fighting for a podium finish. It was therefore a shame for him to experience an electrical problem in the final stage of the day, forcing him to retire from such a strong position. We are going to examine the car back at service to see what went wrong and we hope he can return to the rally on Sunday. Thierry is still running well and has now made his way into the top five overall, which he will look to consolidate in tomorrow’s final two stages. It’s been a hard rally and a tough day for our young team.”

Neuville’s rally was adversely affected by a puncture on Friday morning, losing him several minutes of time. The Belgian persevered during today’s four stages to make up ground, reducing his time deficit and making up places. He now lies fifth overall with two stages remaining in this punishing rally.

Neuville said: “Overall, I had a very good run today with no real problems. I had a much better feeling with the stages this morning and the conditions were not as bad as yesterday. We had a good rhythm and I felt confident with the car and the pace notes. We made some useful changes at lunchtime service, which made the car more comfortable to drive. We are now in the top five, which is quite good. I will just try to reach the end of this rally and hopefully pick up some Power Stage points.”

Sordo had hoped to recover ground after being hampered by power steering problems on Friday, and he started Saturday in a positive manner. He was chasing down a podium position with two trouble-free, competitive stages this morning, including second place in SS8 (San Marcos-Characato). Unfortunately, as the rally resumed for the final stage of the day, SS10, a technical issue forced him to stop.

Sordo said: “Obviously it is a very disappointing end to what had been a very strong day for us. We started this morning with the objective of pushing to continue the momentum we built up yesterday afternoon. I was very happy and the balance of the car was fantastic. We didn’t push too much in the opening stage of the morning to save the tyres but SS8 was really good. We were here today to push for the podium but unfortunately we picked up an electrical problem in the final stage. On a positive note, I have had a lot of confidence in myself in this rally which is good for the final two stages tomorrow.”

Paddon had shown good pace in this morning’s two stages with fifth place in SS7 and sixth in SS8. It is expected that the Kiwi driver will return to the rally tomorrow.

Paddon said: “The morning loop went quite well. We picked up from where we left off yesterday, making some small set-up changes and not having any real problems with the car. We set good stage times and were driving well within ourselves. This afternoon, we were hoping to improve on that. We made some small changes to the car, but early in the first stage, I made a small mistake with after a jump – we went slightly off line onto the edge of the road. Unfortunately, there were some spectators which we hit. It was not a nice incident and not the best way to end the day. Our best wishes go out to everyone who was involved.”

Rally Argentina will conclude on Sunday with the 16.32 El Condor stage running twice, once in the morning and once as the Power Stage in the early afternoon.