Thierry and Nicolas keep their cool to take third 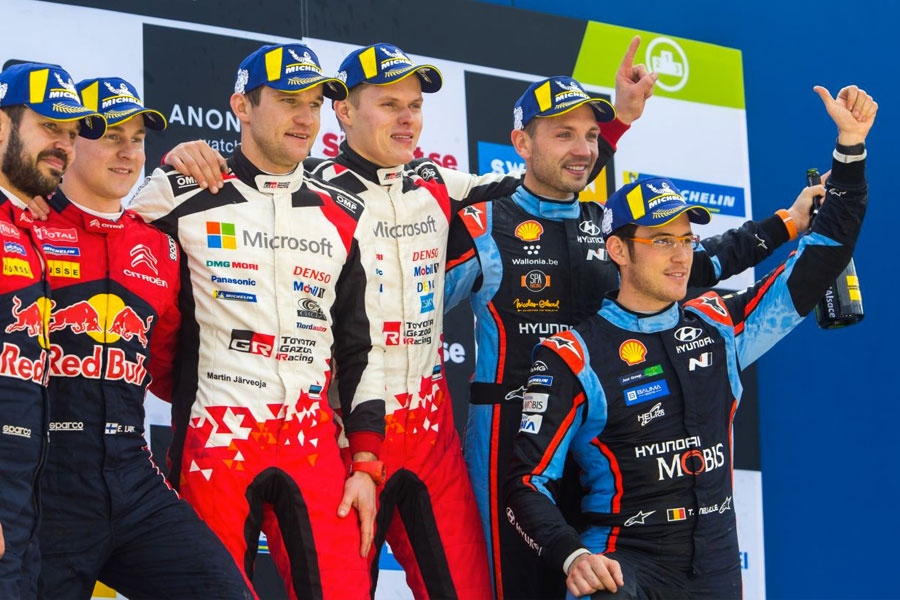 Thierry and Nicolas keep their cool to take third

There’s no business like snow business! Our Belgians Thierry and Nicolas secured their second consecutive podium of the 2019 season with a strong run to third place at Rally Sweden.

Having found themselves down in seventh at the end of Friday’s stages, a determined performance saw them finish just three seconds from second-placed Esapekka Lappi after an exciting final morning.

With two stage wins already secured earlier in the weekend, the duo were aiming to finish the rally on a high. After a tense and closely fought battle, an impressive run in the SS19 Torsby Power Stage saw them add four extra points to their tally.

“We are pleased to be on the podium again,” said Thierry. “We couldn’t have done any more here. It was a big battle in these tricky conditions and we were on the edge for a lot of it. When you are pushing so hard, it is easy to make mistakes, so we have to be content with our third place.”

Andreas and Anders were also firmly in the podium hunt, and spent much of the weekend in a close fight for second place. They finished in fourth overall, fending off M-Sport’s Elfyn Evans in the closing stages.

“We gave it all we could this weekend, and it was an exciting, close fight right to the end,” said Andreas. “It is a pretty good team result; third and fourth gives us important points, but we know it could have been better. Thanks to all the fans for showing us such great support this weekend.”

All three of our crews completed the rally cleanly, underlining the reliability of our i20 Coupe WRC. A consistent and professional performance from Sébastien and Daniel scored them seventh place in the crew’s first visit to Sweden since 2013.

“It has been a complicated weekend, with a lot of ups and downs,” said Sébastien. “We have set some good times during the event and we have been able to learn a lot more about the car, which is very useful for the future.”
Our Team Director Andrea added: “I think we can summarise our weekend results as ‘could have been worse, should have been better’. Our three crews pushed to the limit of what they could do in tricky conditions, and we appreciate the efforts they have all gone to this weekend. We need to keep pushing for more.”

2019 FIA World Rally Championship for Drivers’ Standings
After round 2

2019 FIA World Rally Championship for Manufacturers’ Standings
After round 2