Find out more about our WRC predecessors!
WRC 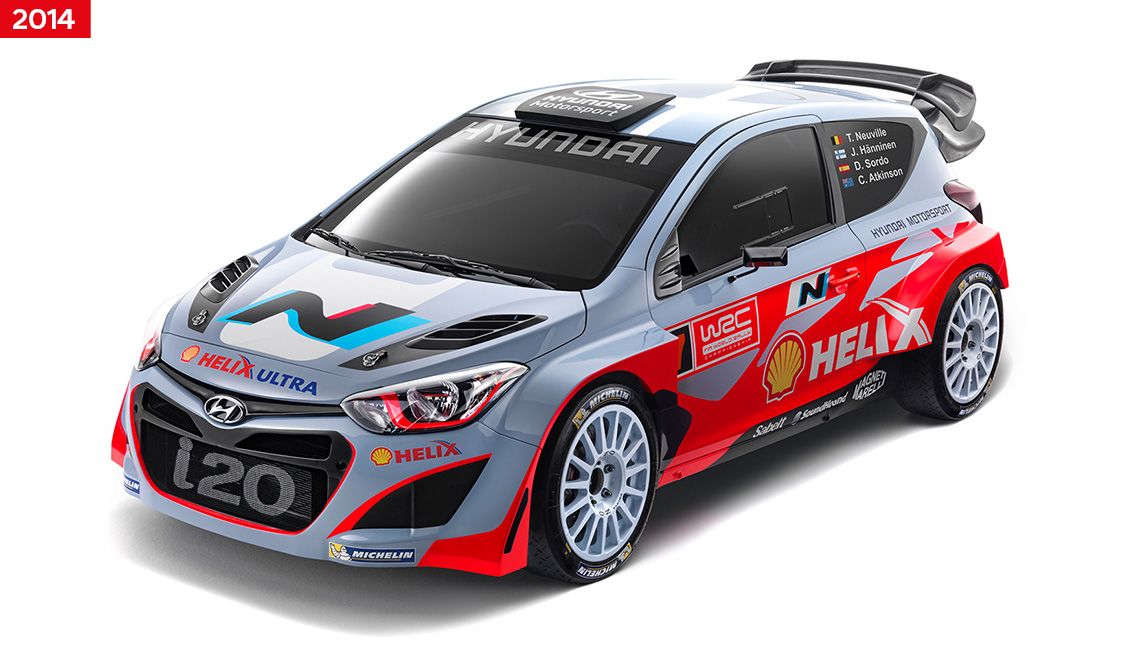 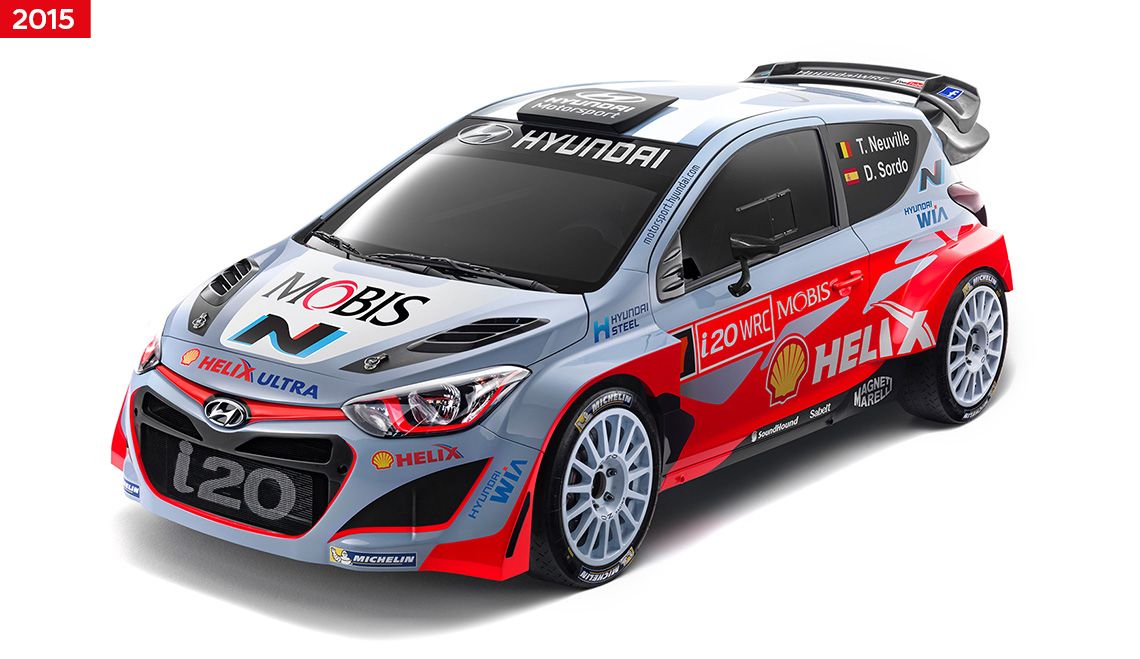 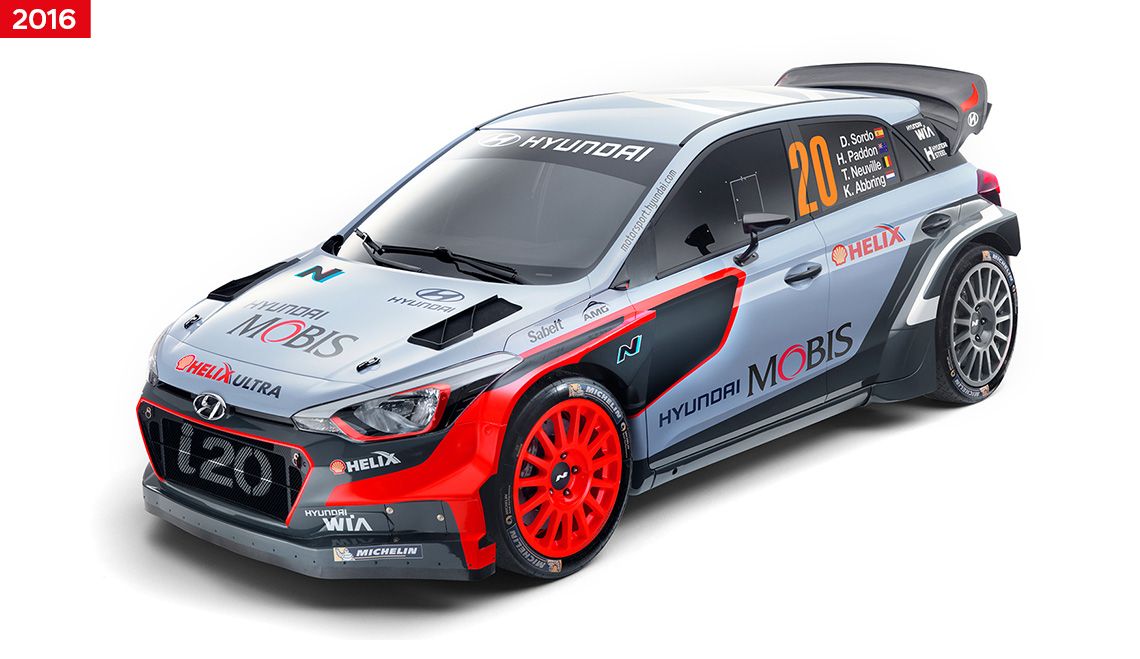 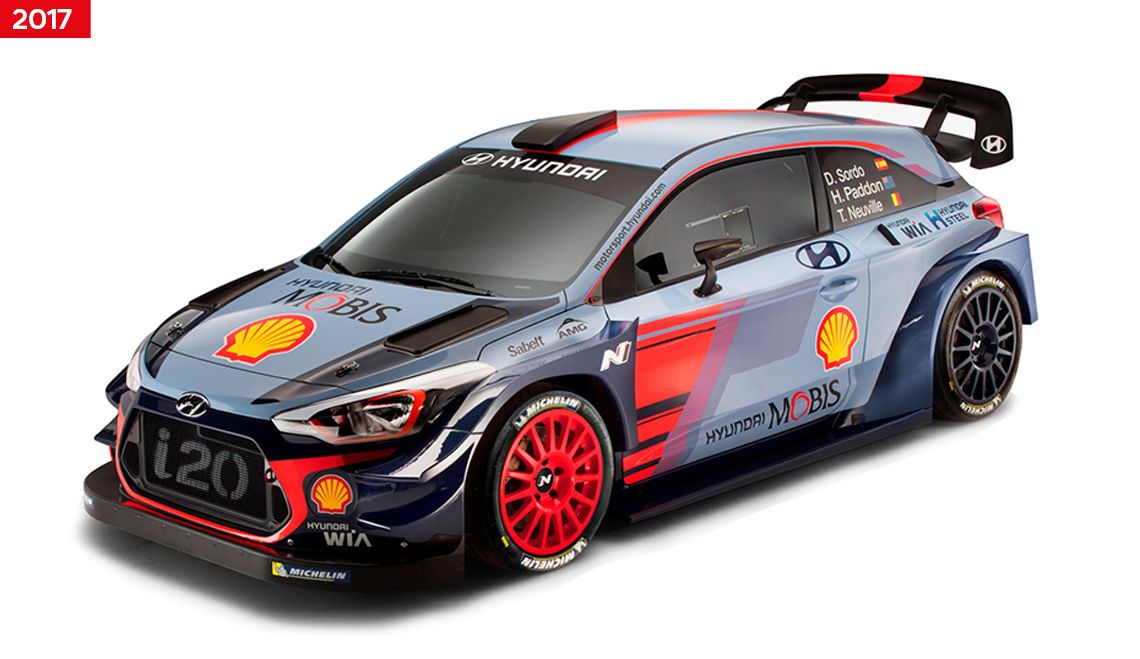 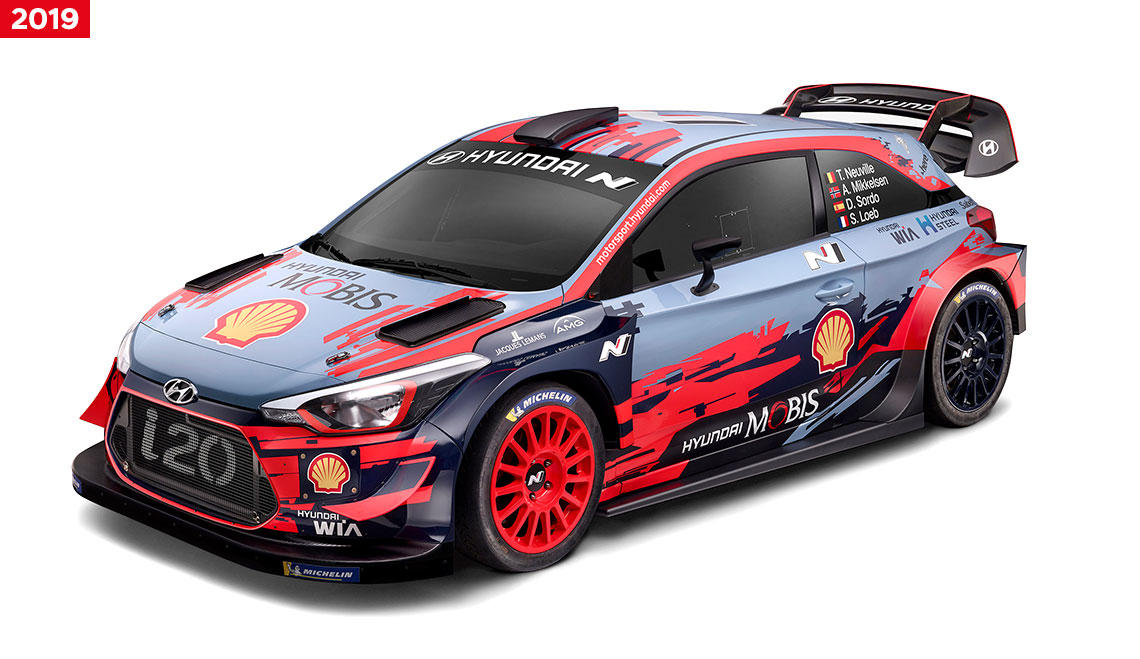 Time was the biggest challenge facing our team in creating the 2014-specification Hyundai i20 WRC. From a blank sheet of paper to a competitive rally in just twelve months, it was a huge achievement.

An evolution of a vehicle designed by Hyundai’s R&D centre in Namyang, the car was prepared at our headquarters in Alzenau to meet FIA regulations. We carried out extensive testing in a range of conditions to fully assess transmission and suspension. 8,000 kilometres were completed from May 2013 up to our WRC debut in January 2014. Our hard work certainly paid off; we scored our first podium in Mexico and our maiden victory with a 1-2 in Germany. 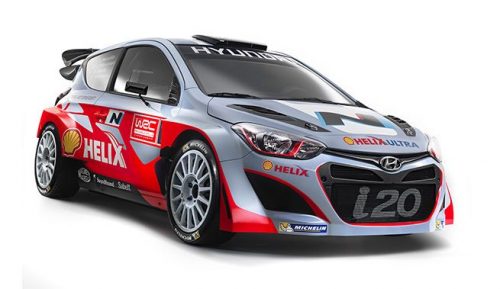 After a valuable year of learning, our challenger for 2015 saw the benefits of our first full season. The i20 WRC had already been significantly developed during 2014 to enhance competitiveness and reliability.

We continued to make improvements throughout our second year. An engine joker was introduced in Rally Mexico, to deliver more power. This upgrade was ratified on our in-house engine test bench. We also introduced a paddle shift in Argentina, which allowed our drivers to extract more consistent performance from the car. The main focus for 2015, though, was on development of the New Generation i20 WRC, which would be introduced for the following season. It was another ambitious phase for our team with two car projects running concurrently, and with more podium success along the way! 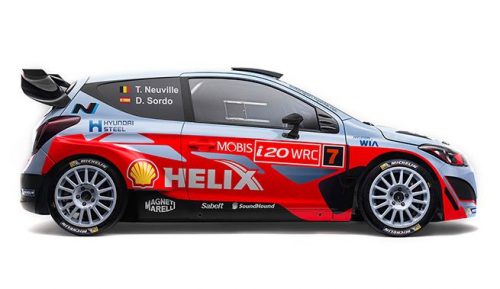 For our third season in WRC, we developed an all-new car based on the New Generation i20. The car was rolled out for the first time in Autumn 2014, and underwent a comprehensive test programme.

From evaluation of components and settings, right up to performance runs, our focus was on both pace and durability. It was the first car built using the full range of capability at our Alzenau factory. With upgrades on bodywork, engine, transmission and suspension, the car was a significant step in all areas. The NG i20 WRC was on the pace immediately with podiums in Monte-Carlo and Sweden. These results were quickly followed by victories in Argentina and Sardinia. With two wins and a total of 12 podium results, this car secured our team second in the Manufacturers’ Championship and helped to establish us as genuine contenders against more experienced competitors. 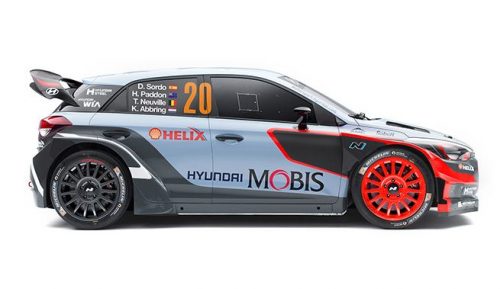 Our third car in four seasons, the Hyundai i20 Coupe WRC, was designed and developed to meet a raft of brand new WRC technical regulations introduced for 2017.

The changes were introduced to enhance the overall spectacle of WRC, with cars sporting an aggressive new look. Updates centred on improving aerodynamic and mechanical grip, with an increase in engine power from 300 to 380bhp, a reduction in the overall weight of the car, and the re-introduction of the active centre differential.

The three-door car completed an intensive period of testing ahead of its debut, as part of a development programme that was run alongside our 2016 WRC campaign. Against tough competition, the car led in its opening two rallies before going on to register a total of four victories in the season – twice the number of its predecessor, with 12 podiums and 91 stage wins. WRC’s sporting and technical regulations remained largely unchanged for the 2018 season, offering continuity as we prepared for another closely fought battle.

We were keen to build on the competitiveness of our i20 Coupe WRC but without resting on our laurels. We critically analysed every aspect of the car in pursuit of a competitive edge, knowing our rivals would also be working hard.

We introduced a number of upgrades throughout the year but our major focus was on improving the car’s performance on tarmac, where we struggled against our rivals. Still, our i20 Coupe WRC continued to prove itself capable of winning rallies, with victories in Sweden, Portugal and Sardinia during one of WRC’S closest-ever seasons.

Our sixth season in WRC, and third in a row with the i20 Coupe WRC, allowed us important stability as we targeted a debut WRC title in 2019.
We were determined to improve the performance of our i20 Coupe WRC on all terrains, using the experience gained from previous seasons to provide our crews with a competitive package on gravel and tarmac.
An intensive development program during the season enabled us to deliver on our goals. We scored victories on gravel (Argentina and Sardinia), tarmac (Corsica) and mixed surface (Spain) – as well as celebrating our first manufacturers’ title. It was our most accomplished and best all-round performance in WRC to date. 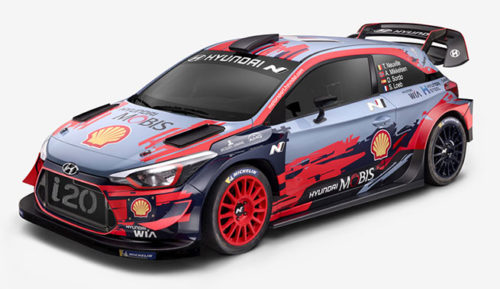 We entered our seventh season in WRC with a huge amount of collective drive, all focused towards one common goal: to provide our crews with the most competitive package to defend our 2019 manufacturers’ title.

The WRC regulations remained unchanged in 2020, providing us with an opportunity to further improve our championship-winning i20 Coupe WRC across all terrains. During a fractured season due to the Covid-19 pandemic, the team worked tirelessly to keep upgrading the car throughout the year, giving our talented crews the best chance to pick up the points we required to win our second consecutive manufacturers’ title.

The team’s hard work certainly paid off, as our i20 Coupe WRC claimed victory on the tarmac and snow of Monte-Carlo, as well as picking up gravel wins in both Estonia and Italy. After seven tightly contested rounds, we were once again crowned the manufacturers’ champion in 2020. 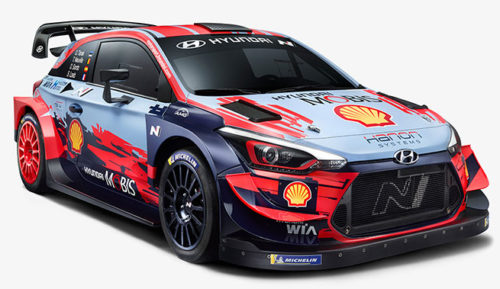 Our eighth year in the WRC saw us enjoy one of our most consistent seasons and resulted in our greatest points-haul in our history.

2021 marked the final year of the 2017 regulations era, during which we became one of the teams to beat at the pinnacle of rallying. We were determined to provide a positive send-off to our i20 Coupe WRC before we welcomed the exciting new hybrid Rally1 generation.

Following a curtailed 2020 campaign, the calendar was once again full in 2021, with twelve varied and challenging events on the schedule. Over the course of the year, our entire team was pushed to the limit like never before, with each event presenting new obstacles to tackle and overcome. Although it was difficult, even when things were not going our way, we continued to push ourselves until the very end.

Despite being unable to retain our crown, in a closely-fought season we claimed three victories and 17 podiums on our way to 462 manufacturer’s points.