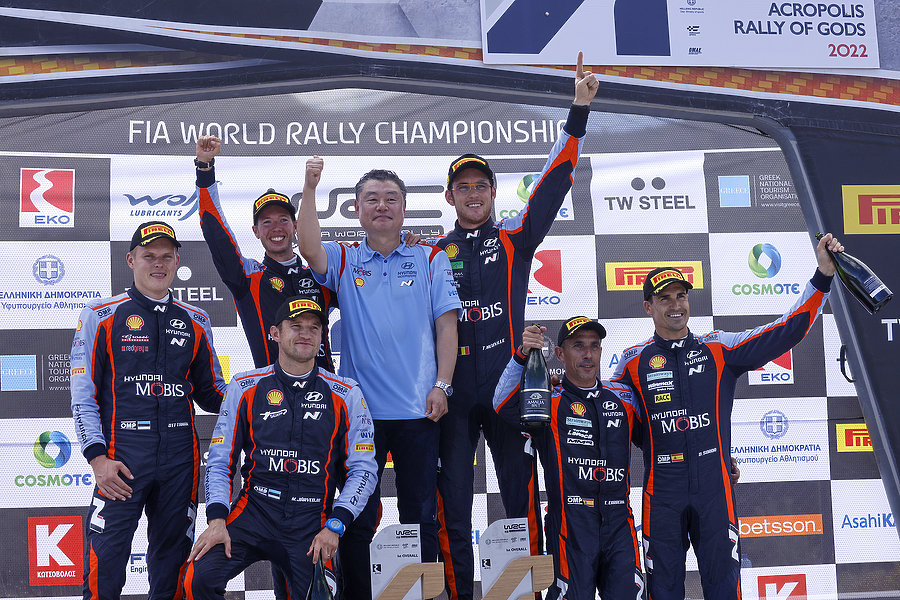 For the first time in our history, we have claimed a WRC podium clean sweep after a dominant performance in the Acropolis Rally. Thierry and Martijn led a 1-2-3 finish on the final day of action, with Ott/Martin and Dani/Cándido taking second and third respectively.

“This is a special victory and an historic result,” said Thierry. “I think the most important aspect is the 1-2-3 for the team, a result we entirely deserve after all the efforts from everyone. We can take immense pride in this achievement.”

Three in a row

All three of our crews scored stage wins over the weekend underscoring the pace and performance of our i20 N Rally1 car. On tough gravel stages, reliability was just as important as outright competitiveness.

Ott and Martin confirmed their sixth podium of the season with a fine run to second, following back-to-back wins in Finland and Belgium. The pair completed the rally with maximum points in the Power Stage.

“A quite incredible result,” said Ott. “It has been a very demanding rally, especially on the technical side, so the team has done a good job to keep all the cars running. The car is definitely working better. There are still some things where I can see some performance is coming. For now, we need to enjoy this 1-2-3 result.”

In their first rally since Sardinia, Dani and Cándido were immediately back on form. Heading into the final day in third place, our Spaniards took a measured approach to the final stages to cement their podium finish. They have finished on the podium in their last five WRC outings!

“I am really happy with my podium and for our 1-2-3 result,” said Dani. “Everyone in this team deserves it, they have worked so hard these days. Many drivers had some issues this weekend but, in the end, we were there with all three cars and came away with a really fantastic team result.”

The impressive result marks our third consecutive WRC victory with the i20 N Rally1 car after Finland and Belgium.

“What an historical moment for our team and Hyundai, the first time ever that we have scored a triple podium,” said our Deputy Team Director Julien. “Thank you to all the people supporting us, and above all to those in our factory. Reliability has proven again to be one of the keys; our car has improved a lot on this side since Monte-Carlo. We will definitely enjoy this one.”

Our President Sean Kim added: “This is a very special day for everyone at Hyundai Motorsport, and indeed the global Hyundai family, as we celebrate our first-ever 1-2-3 result in a WRC event. A fantastic team effort, realised by our three incredible crews. To see our Hyundai i20 N Rally1 take three wins in a row – in very different rallies – is reward for tremendous hard work by our team on-site and at the factory. We share this result together as a team.”

WRC now travels across the world for round 11, Rally New Zealand, which will take place from September 29-October 2.

2022 FIA World Rally Championship for Manufacturers’ Standings
After round 10

2022 FIA World Rally Championship for Drivers’ Standings
After round 10