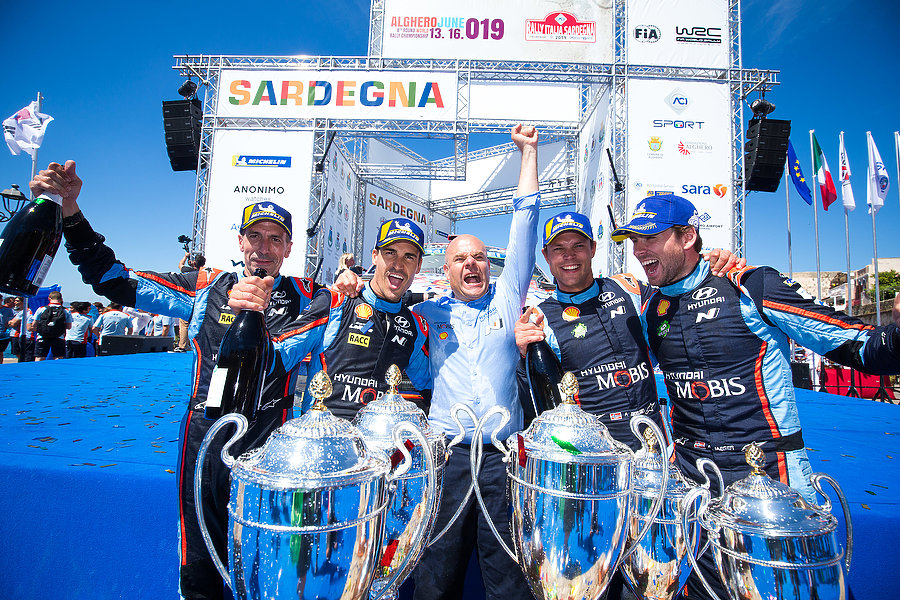 In a dramatic conclusion to Rally Italia Sardegna, we have claimed our third victory of the 2019 WRC season with Dani and Carlos unexpectedly crowned winners.

Our Spaniards headed into the final morning aiming to secure second spot following a competitive event, which they led earlier in the weekend. However, problems for rally leader Ott Tänak on the concluding Power Stage (Sassari-Argentiera) saw the Estonian drop down the order, elevating Dani and Carlos to the top spot.

“It’s an amazing feeling to take my first win for Hyundai and the second WRC win of my career,” said Dani. “I am very sorry for Ott and Toyota to have experienced such bad luck on the Power Stage. We knew we had to keep the pressure on in case this sort of situation occurred. I just can’t believe it happened. We have been quick and consistent all weekend and we now have this fantastic victory as a reward.”

Andreas and Anders also benefitted from the situation, having impressively overhauled Elfyn Evans for fourth with a string of stage wins. They were promoted to third place and stepped onto the podium for the second time this season.

“We gave it a massive push on the final morning in an effort to cut the gap to Elfyn,” said Andreas. “Taking all four stage wins (on Sunday) was a fantastic feeling. We would have been content to take fourth. Unfortunately, Ott had his issues, which then handed us a podium finish – an unexpected but very welcome bonus.”

Thierry and Nicolas endured a weekend to forget. Tyre selection difficulties on Friday, as well as a pace notes miscalculation, put them on the back foot early on, from which they weren’t able to recover. They salvaged three extra points from the Power Stage, but were forced to settle for sixth.

“Not the weekend we were looking for,” said Thierry. “We have to put it down to ‘one of those weekends’ and look to regroup and fight back in Finland. Congratulations to Dani, I am really pleased to see him and Carlos secure their first win for the team.”

The Sardinia result sees us extend our lead in the manufacturers’ standings. Thierry retains third place in the drivers’ table on 143 points, three behind Sébastien Ogier and seven adrift of Tänak with six events left of the season.

“We extend our empathy to everyone at Toyota Gazoo Racing, to Tommi, Ott and Martin, for the cruel way that they had a deserved victory taken away from them,” commented our Team Director Andrea. “At the same time, I am pleased for Dani and Carlos who have worked professionally all weekend, as have all our three crews, to put themselves in a position to capitalise on today’s situation.”

2019 FIA World Rally Championship for Drivers’ Standings
After round 8

2019 FIA World Rally Championship for Manufacturers’ Standings
After round 8