A strong start in Sardinia

Top of the timings for Thierry 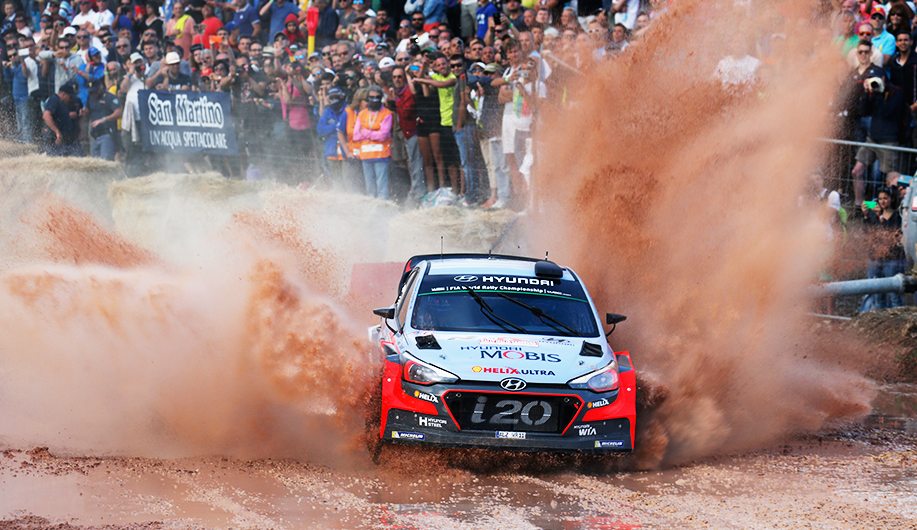 Top of the timings for Thierry

Thierry leads the way on Friday after taking an impressive five stage wins in his New Generation i20 WRC.

What a start to our rally in Sardinia! We have our New Generation i20 WRC on top of the day one classification with our Belgian crew of Thierry and Nicolas.

A total of eight stages were run on Friday, a repeated loop of four tests totalling 102.86km competitive kilometres. The Sardinian stages have often favoured drivers running later in the starting order, but that alone is never enough for good stage times. It’s also important to have a strong car and driver combination, too!

Thierry’s successes on Friday took his total WRC career stage wins to an incredible 60. Included in that total are 27 fastest times as a Hyundai Motorsport driver, with 11 so far this season.

“A great day for us,” said Thierry. “I think everyone is pleased to see us back at the front. We are definitely very happy to be here!”

Our Team Principal Michel Nandan agreed: “We’re all delighted to see Thierry and Nicolas back at the top of a WRC classification. They’ve made the most of their road position and have put themselves firmly in contention for a podium result this weekend.”

Our Spanish crew of Dani and Marc have proven to be incredibly consistent so far this season. They had a trouble-free Friday and have set themselves up for a strong points-scoring finish in Sardinia.

“It was an OK day for us,” said Dani at the end of Friday’s stages. “It’s good to be inside the top-six, even if we’ve lacked a bit of confidence. The conditions were slippery at times. The car behaved quite well, but it was difficult to drive outside the line on the afternoon loop.”

Flexible service on Friday evening means mechanics can work on the cars for a maximum of 48 minutes before Parc Fermé cut-off at 22:30. The team will prepare the cars for Saturday’s six tough stages.

“We need to find some modifications to improve the car a bit for Saturday,” he added. “There are some hard stages to come so we have to keep pushing and seeing where we can make up time.”

Kevin and Seb returned to action for their second WRC event of 2016 after a disappointing Rally Portugal. It was another frustrating start for the Dutch-British crew. A broken propshaft affected their morning loop.

“We wanted to have a better start to this rally but it wasn’t to be,” Kevin lamented. “These things can happen, it’s just unfortunate. We nursed our way through the morning loop with only brakes at the rear. We took things cautiously in the afternoon to try and build a rhythm. It wasn’t easy but the rally is not over yet. We look forward to a more productive Saturday.”

Hayden and John finished on the podium in Sardinia in 2015. Twelve months on and things could not be more different. A troubled day for the Kiwi crew saw them have a spin in SS4 (Castelsardo 1, 14.02km), and damage their rear suspension arm. The afternoon turned even worse when they went off road at the end of SS7 (Tula 2), bringing an end to their day.

“There are no words,” Hayden said at the end of Friday. “I’m so sorry to the team. It was another silly mistake. I am sure we’ll bounce back. I hope this is just a small dip we are going through, which will help us come back stronger.”

Michel gave his support: “It was another disappointing day for Hayden and John. We appreciate his honesty; this is rallying and these things happen. We will check the damage on the car to see if it’s reparable for Saturday.”

Saturday’s itinerary will take in six stages, a repeat loop of three tough tests. From the 22.20km Montí di Alá to the 22.39km Coiluna-Loelle, and onto the longest stage of the rally  the 44.26km Monte Lerno!

“Saturday’s stages offer a different picture,” says rally leader Thierry. “It will be an interesting fight. All we can hope is that the car continues to give us a good feeling and that we can demonstrate the sort of pace we had on Friday.”