Action heats up in Sardinia 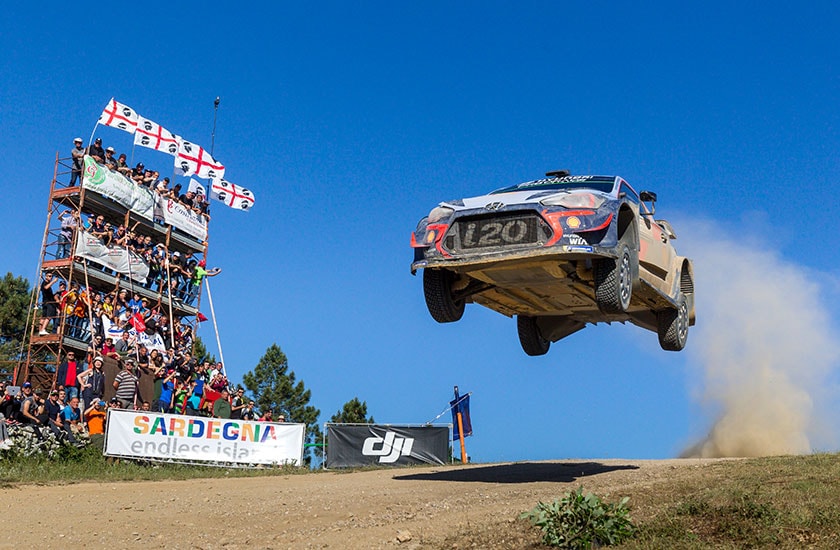 As the Sardinian sun made a welcome return on Saturday, things started to heat up on the stages with close battles for position up and down the order.

Saturday’s schedule consisted of a three-stage loop, repeated in the afternoon. Starting with the 14.95km Coiluna-Loelle test, the route moved onto longer runs through Monti di Ala (28.52km) and Monte Lerno (29.11km)  including the iconic Micky’s Jump.

Our Belgian crew registered three more stage wins on the penultimate day, including both Monte Lerno stages, as they cut their gap to leader Sébastien Ogier to just 3.9 seconds. It was a signal of intent from Thierry and Nicolas as they chase their third win of 2018.

Up front and fighting

“We have had a strong performance and a good feeling inside the car,” commented Thierry. “The mechanics have done an amazing job. We’ve taken fewer risks today but still been able to push. We have set up a great fight with Sébastien. It will be full attack on Sunday.”

Having struggled on Friday, Hayden and Seb were able to show more representative pace, particularly on the morning loop. They moved into the top-four overall but will have to fend off a feisty Mads Østberg on Sunday with only 2.1-seconds splitting them.

“We have definitely enjoyed the conditions more than we did on Friday,” said Hayden. “We tried to keep the pressure on Mads and it’s going to be a close-run final morning. We won’t be doing anything foolish but we’ll do our best to defend our place.”

Re-joining under Rally 2, it was a learning day for our Norwegians Andreas and Anders. A spin in SS12 and a puncture in SS16 (Monte Lerno 1 and 2) were the downsides to an otherwise decent day.

“We knew there wasn’t going to be much to challenge for,” said Andreas. “Instead, we wanted to find a good feeling and carry out some learning for next year. There’s not much more we could have done in the circumstances.”

Our Team Principal Michel also had a special word for our mechanics: “They have worked incredibly hard this weekend. We took the decision to change the fuel tank on Thierry’s car at lunchtime service, and they did this in just ten minutes  an impressive feat that has allowed us to remain in the hunt for victory.”