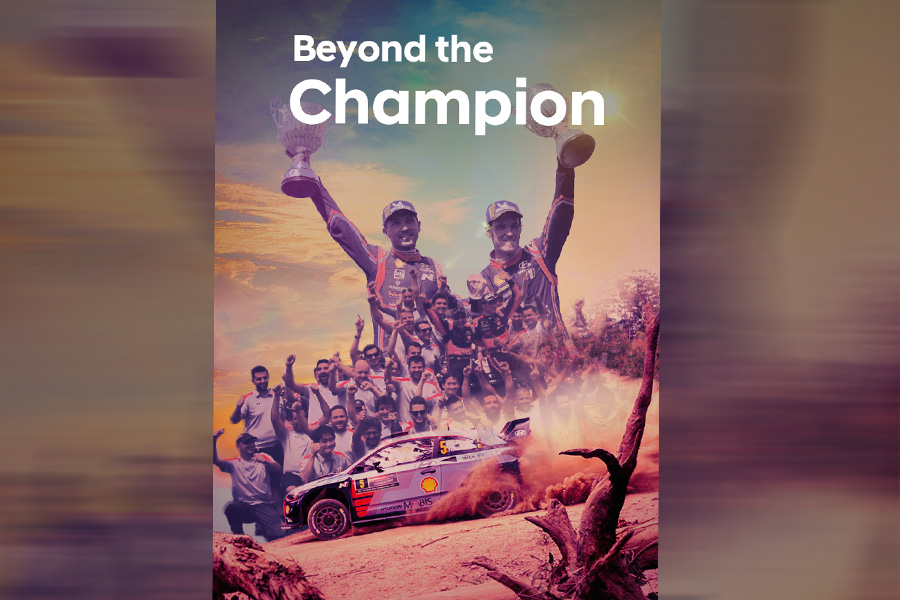 We are the subject of a brand-new documentary, commissioned by Hyundai Motor Company, that charts our journey from being the new team on the block to becoming back-to-back WRC title winners.

“The ‘Beyond the Champion’ documentary offers a unique perspective on our WRC journey to date, and the rise from rookies to two-time world champions,” said our Director of Marketing and PR, Stefan Ph. Henrich.

A story worth telling
The series will make its debut this Thursday to coincide with the start of Safari Rally Kenya. Three further episodes will launch alongside the forthcoming rallies on the 2021 season calendar – Estonia, Belgium and Greece – published on our online platform ‘Channel Hyundai’, as well as our YouTube channel and across social media.

The opening episode, ‘The Challenge for Progress’, will review the inaugural years of our team, including our debut season in the championship and the memorable first-ever victory at Rallye Deutschland, using unseen footage and exclusive interviews.

Subsequent episodes: ‘The Underdog Uprising’, ‘For the Champion’ and ‘Beyond the Champion’ follow the story up to our first manufacturers’ victory in 2019 – and the successful defence of our title one year later.

More than meets the eye
The honest and authentic series aims to document the unseen team effort behind our endeavours in WRC, a championship that has proven to be a legitimate proving ground for our high-performance N brand.

“This four-part series shows the human side of our team just as much as a challenging spirit with which we’ve approached WRC – and includes plenty of behind-the-scenes moments, milestones and memories,” said Stefan. “We’re proud of our WRC achievements to date and hope that our fans will enjoy revisiting the story so far.”

How to watch: The first episode of Beyond the Champion will be broadcast on Channel Hyundai – a free-to-access portal containing a variety of Hyundai-owned and themed visual content: channel.hyundai.com.