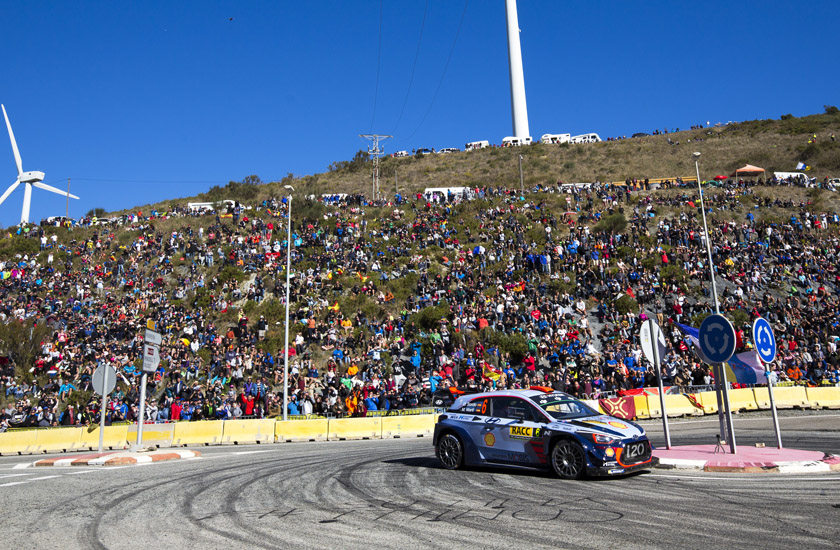 Our hopes of fighting for the 2017 WRC Manufacturers’ Championship were severely dented on the final day of Rally de España.

While fighting back from hydraulic issues on Saturday, Thierry and Nicolas were forced to retire from the rally with suspension damage after cutting a corner.

Our Belgians were pushing hard but were caught out in the Santa Marina stage, halfway through Sunday’s action.

“We are obviously hugely disappointed,” said Thierry. “I turned a bit too tightly in a slow corner and hit something that damaged the wheel. That then caused the front suspension to break. Game over.”

The non-score means that Thierry has dropped to third in the Drivers’ Championship with two rounds of the season remaining.

Home stars Dani and Marc gave the spectators something to cheer by taking victory in the Power Stage, having re-joined under Rally 2 on Sunday morning. Scoring five extra points, the result shows just what the crew was capable of achieving in Spain.

“The Power Stage win was a nice consolation,” said Dani. “There has only really been on negative thing all weekend. Unfortunately, it was a really big one. I am just sorry for the fans, the team and myself for a stupid error on Saturday that cost us heavily.”

“Dani has been on the pace all weekend,” added our Team Principal Michel. “His performance in the Power Stage showed his true potential.”

After retiring with suspension damage on Saturday, Andreas and Anders restarted on Sunday under Rally 2. The Norwegian duo continued their adaptation to the i20 Coupe WRC on tarmac with a tricky Sunday morning.

“We couldn’t really find the confidence to push,” admitted Andreas. “We had to drive SS15 with the bonnet open after we didn’t secure it properly, and that cracked the windscreen. Even so, we have been able to try some new things and find a good direction for the future.”

Our latest recruits can reflect on Spain with positive memories, having led the rally and taken stage win for the first time in Hyundai Motorsport colours.

Finish with a flourish

With all three of our cars suffering similar issues over the Spanish weekend, we are now 83 points behind M-Sport in the Manufacturers’ Championship. A maximum of 86 points are available in the final two rallies.

As a team, we will now regroup ahead of a return to full gravel in Wales GB and Australia.

“A difficult weekend for the whole team,” said Michel. “There have been some positives in amongst the disappointment. However, we have also seen we have to improve on tarmac. We will continue to work on this area for the future. There is still a glimmer of hope for Thierry in the Drivers’ Championship, but we have to accept that the Manufacturers’ title is all but over for us now.”

“We have to keep our feet on the ground,” concluded Thierry. “We have had a fantastic season on the whole. We want to finish the championship with good results in GB and Australia.”

2017 FIA World Rally Championship for Drivers’ Standings
After round 11

2017 FIA World Rally Championship for Manufacturers’ Standings
After round 11