The Austrian event also saw our HMDP on gravel for the first time. 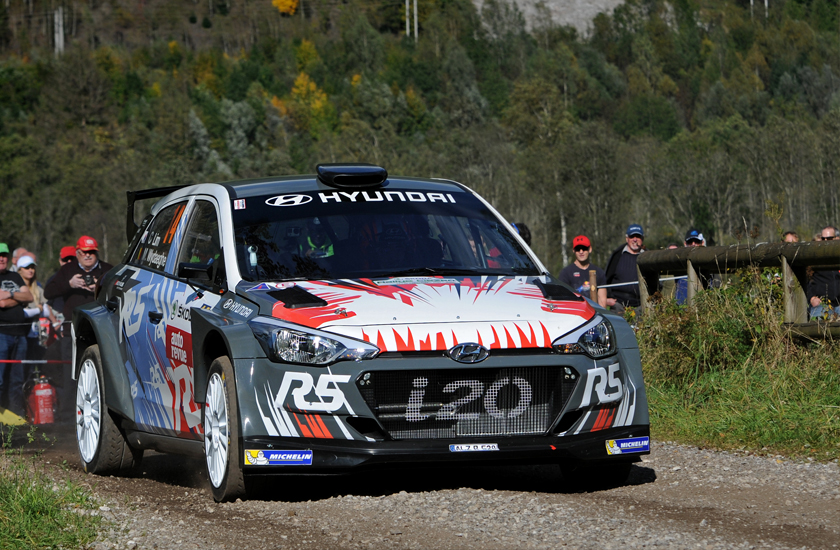 The Austrian event also saw our HMDP on gravel for the first time.

Chewon Lim and Martijn Wydaeghe charged to another positive result at Rallye Liezen, finishing every stage as they continued their Tour European Rally (TER) Series campaign.

The latest rally of their busy season put the Hyundai Motorsport Driver development Crew and their New Generation i20 R5 at the start of another unfamiliar event, taking on not only the other crews entered for the TER Series, but also the regulars of the Austrian championship. However, the pair prepared for the weekend methodically, enjoying a productive recce as they studied the stages ahead.

Their work, however, could not ready them for a punctured right-rear tyre on the very first stage. Coming only a few kilometres after the start the problem was further complicated by a malfunctioning wheel-gun that forced the crew to revert to the manual tools. The twin issues lost the pair more than six minutes to the overall leader, as they completed the first stage in last position.

Showing their pace on tarmac and gravel

However, the early problem did not dent their confidence on the Austrian stages. With the problem repaired they were able to compete with the other R5 crews at the front of the rally. They completed the opening day of competition with a top ten time on the Super Special laid out on the streets of Liezen itself as they climbed back up the order.

The early loss of time gave the team an additional problem to start the second day. The new start order placed them behind several lower class cars, which they caught on a number of stages limiting their progress in the standings.

Though the rally was primarily a tarmac event the route also included several gravel sections, which marked the first time that Lim had run an R5 car competitively on a loose surface. Despite his lack of experience, as well as the fact that the crews tackled the gravel in cars tuned for tarmac roads, he enjoyed a good feeling in the car, overcoming the challenge to set competitive times in the tricky conditions.

Lim and Wydaeghe completed the rally with three successive top ten stage times, outpacing many of the local crews in the process to claim 13th overall.

Chewon Lim said: “This rally was very tough for many reasons. It was my first time driving the New Generation i20 R5 on gravel. We prepared well for this during recce, but driving on the stages was a new experience for me. We caught some slower cars on some stages, but I had a good feeling in the car straight away. The new experience reminded me that I still have a lot to learn about rallying. The problem on the first stage was really frustrating. I felt that the car was not right and eventually we had to stop and replace the tyre, which we had to do with the hand tools. We lost a lot of time, but focused on completing the weekend and gaining as much experience as we can.”

Hyundai Motorsport Team Manager Alain Penasse said: “Rallye Liezen was another good weekend for Chewon and Martijn, completing the full length of a very demanding rally. Again they prepared for the event well, and showed consistent pace throughout the weekend, including on the gravel sections. That this was their first time competing in the New Generation i20 R5 together on gravel shows what a comparatively early stage they are at in their career. However, that Chewon coped with the conditions so well is a good indication of how he has progressed this season. To lose so much time on the first stage of the event is obviously far from perfect, but they were consistent throughout the remainder of the event, and were rewarded with some good times.”