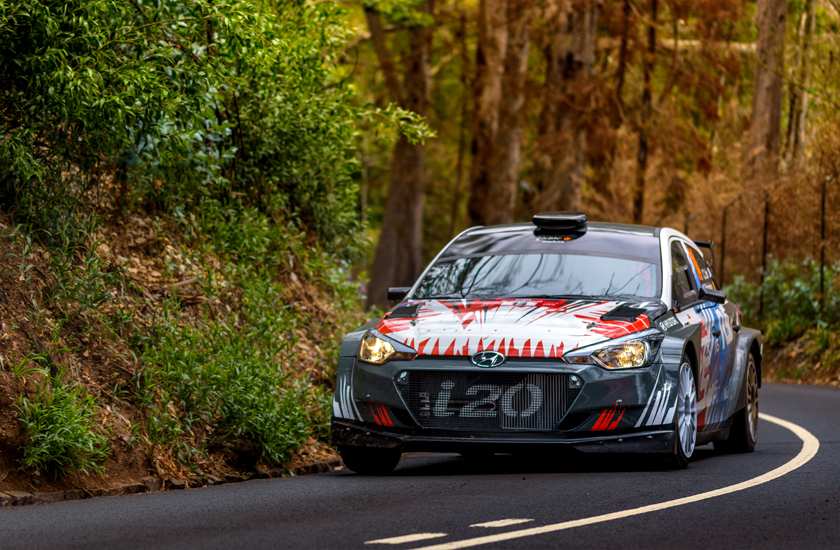 The Hyundai Motorsport Driver development Program (HMDP) crew of Chewon Lim and Martijn Wydaeghe made their return to competition at the Rali Vinho da Madeira after a month’s break following the Ypres Rally. Back at the wheel of his New Generation i20 R5 the Korean driver had no trouble in immediately getting up to speed, completing both the opening stages with the sixth fastest time.

The feat was made all the more impressive as the two stages represented starkly different challenges. The weekend on the Portuguese island began with a Super Special laid out on the sea front roads in the rally’s base of Funchal, before ascending into the mountains for the first run on more traditional Madeira roads. Their pace put them amongst a very strong group of teams, including current WRC runners and Portuguese crews with the advantage of greater experience on the event.

Unfortunately, after their strong early showing a minor problem on the third stage, the longest of event, left the pair down on power. Though they had lost several minutes to the crews they had been fighting at the head of the order they drove the road at lower speed and returned to service, where the problem was quickly fixed.

However, with stages on different sides of the island run in contrasting conditions the event was a tough challenge. As they chased their fourth top ten time of the opening day they ran wide through a left-hander and hit a low wall on the exit of the corner.  The damage to the right-rear of the car was not only serious enough to force them to stop, but also to prevent from rejoining the competition on Saturday. The result was bitterly disappointing for the team and crew given the promise shown by their early pace.

Chewon Lim said: “I felt that we were very strong on the stages in Madeira. The roads were very challenging, and the conditions made it very tough to get the best pace at all times. It was great to be back in the car after a month, and even better to be on the pace straight away. We were obviously very pleased with our times at the start, and to be in the top ten alongside the local teams and much more experienced drivers was a huge boost for us. Sadly we were not able to show our true pace in the results. I ran wide through a corner and hit a low wall on the exit, which put us out for the weekend. Every time we get in the car we are progressing, so to miss out on the time on the stages is the biggest disappointment, rather than the result.”

Hyundai Motorsport Team Manager Alain Penasse said: “Chewon and Martijn showed very good pace on the early stages. To be able to record strong times on both the Super Special and more mountainous stage is a very good achievement. Madeira can always present some unique challenges with the conditions in different valleys forcing crews to adjust very quickly to changes in grip levels. It really does help to have some experience, or local knowledge. However, as well as the skills needed for driving on the stages part of this year with Chewon is also to allow him to get familiar with competing in rallying, rather than sprint events he had raced previously. His pace is good, but in order to make the best progress he can he needs to develop his understanding of the format of these longer events.”

The next scheduled rally for Lim and Wydaeghe will see them return to the stages of Rallye Deutschland, where they competed last year in the R2-spec car.

Earlier this month Hyundai Motorsport announced the expansion of the HMDP project, with drivers invited to the team’s headquarters in Alzenau, Germany as candidates to run a New Generation i20 R5 in next year’s WRC2 championship.