The crew were running strongly before the incident 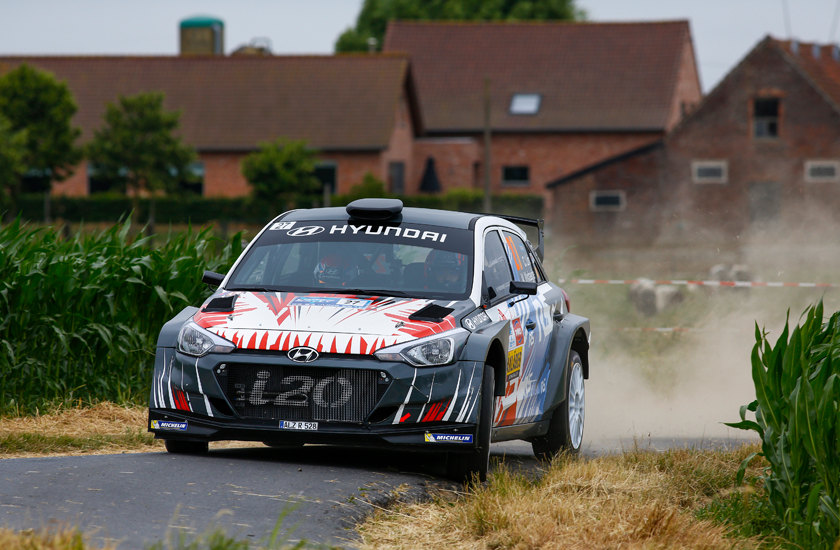 The crew were running strongly before the incident

Hyundai Motorsport’s Driver Development Program crew of Chewon Lim and Martijn Wydaeghe performed strongly on the opening day of the Ypres Rally in their New Generation i20 R5, but had their competitive run end in unusual circumstances early on Saturday.

The weekend, as well as being one of the biggest rallies of the year of Lim and Wydaeghe was also the first time they had returned to an event where they competed last year. With this added experience of the stages, the pair were well prepared for the weekend. They could also draw on the confidence from both a positive run at the Rally van Wervik two weeks ago, and a pre-event test alongside Hyundai Motorsport World Rally Championship (WRC) driver Thierry Neuville.

Throughout the opening day Lim and Wydaeghe climbed the overall rankings, gaining in confidence in their New Generation i20 R5 on the, fast, open Flanders stages. In a very strong field of R5 crews that combined the entry lists of the Belgian and British national championships with the Tour European Rally (TER) Series the pair moved steadily up the order, their times improving as other crews fell out of the event due to mistakes or mechanical issues.

The pair returned to the service park at the end of the first day’s stages inside the top 20 overall, a strong fourth among the crews registered for the TER Series, with the pace to continue their progress up the standings when the action began on Saturday morning.

Unfortunately, a combination of the challenges on the stages would leave them unable to deliver on that promise.

As happened with many other competitors the rear window of his car shattered on a hard landing from a jump on the Kemmelberg stage that began the second day of the rally. However, while initially the damage did not cause any problems, later in the same loop the damage helped bring their Ypres weekend to a sudden end. As Lim approached a corner on SS11 some pieces of the glass became stuck in the pedals, preventing him from slowing down and unable to avoid a damaging trip into a roadside ditch.

Chewon Lim said: “The Ypres Rally is one of the biggest events where I have competed, but it was also one of the toughest, both in terms of the stages and the strength of the competitors. I was quite happy with my performance on the opening day, to move up the order and gain some more confidence in the New Generation i20 R5. On Saturday morning there was lots of glass in the car from when the back window broke and a piece got under the throttle pedal and stopped it returning to neutral, so we couldn’t slow down for the corner. Obviously it’s frustrating, as I think we could have continued moving up the order, but we will take the positives and move on.”

Hyundai Motorsport Team Manager Alain Penasse said: “The Ypres Rally was a good weekend for Chewon and Martijn. It is always a very tough rally, and this year was no exception. They performed very well on the opening day to avoid mistakes and move up the order, while gaining important experience in the New Generation i20 R5 on the stages. With the same pace they should have been able continue their progress on the second day. Several crews suffered similar damage over the same jump on Saturday morning, and it would have been an easy issue to solve in service. Unfortunately, however, by no fault of their own they were forced to retire before the team had the opportunity.”