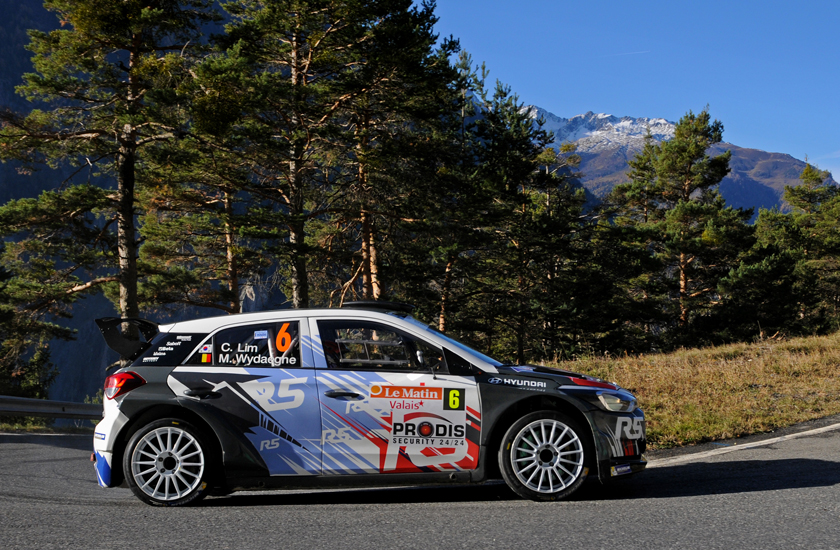 Hyundai Motorsport Driver development Program (HMDP) crew Chewon Lim and Martijn Wydaeghe set a succession of strong times in their New Generation i20 R5 on the Rallye International du Valais. However, a serious lapse in judgement on one of the final liaison sections ended their weekend early.

Preparations for the Swiss event, the fifth round of the Tour European Rally (TER) Series, served to prove how far the pairing have progressed during their intensive 2017 HMDP season. Despite having competed at the same event last year, with many of the stages remaining unchanged over the previous event, Lim elected to create a new set of pacenotes for the weekend. This allowed him to take full advantage of how his partnership with his Belgian co-driver has evolved this year. Compared to 12 months ago the pair now relies on an entirely different note system, which has increasingly allowed Chewon to attack stages with confidence.

This, combined with the familiarity with many of the roads, quickly showed in their pace on the stages. During the opening day of the rally the pair set a string of top-ten times, including a pair of top-fives, to hold fifth position overall overnight.

At the start of the second day of competition he continued his positive showing, adding another top-five time to his record to help maintain his overnight position. Still though, the Korean driver felt he could have performed better. His pace on the longest stage of the rally suffered from his tyres  the softest compound available  overheating before even the halfway point, leaving him struggling for grip in the later sections.

However, on the road section before the final two stages Lim was stopped by police after breaking the speed limit as he overtook another car. The offence was rightly reported to the rally organisers who took the decision to exclude their pair from the event.

Chewon Lim said: “I was happy with my performance during this rally. I was able to combine the experience I had of the stages from last season, and the greater understanding I now have with my co-driver to make some very good notes for the stages. I was very confident in myself and the car at the start and it showed in our times and overall position. We had a small problem with being on the wrong tyres on the long stage which cost us some time. The end of the rally was a really stupid mistake, which I obviously shouldn’t have made. It’s not the way we wanted to end the weekend, but we cannot fault the decision of the organisers.”

Hyundai Motorsport Team Manager Alain Penasse said: “Chewon had a good rhythm on the stages throughout the weekend, and that showed in the times he was able to set during the rally. His preparation for the rally proved what steps forward he has been able to make this season. Even his recognition of the issue with the tyres proves the improved feeling he has for the handling of the car and the demands of driving on the stages. However, again he made a mistake which prevented him from finishing the event and claiming the result which his performance merited. It was very disappointing. He made a stupid error, and left the organisers with no option but to exclude him from the event.”