Thierry and Hayden split by just 12.6 seconds after Saturday stages 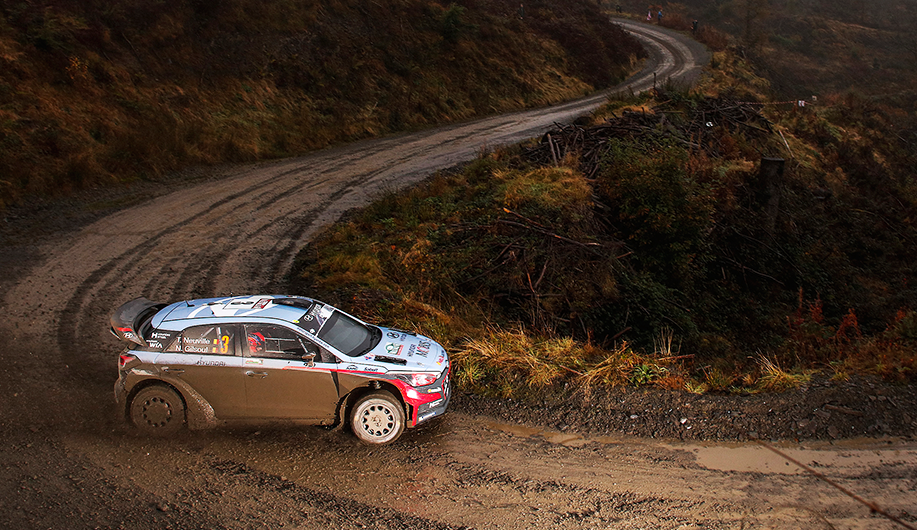 Thierry and Hayden split by just 12.6 seconds after Saturday stages

We’ve taken an important step closer to our target for this weekend’s Wales Rally GB with two crews involved in a close podium fight. It’s been another challenging day as we’ve tackled stages that haven’t been on the itinerary since 1997  and taken part in WRC’s first stage in England since 1999.

At the end of Saturday’s eight competitive stages, it was Thierry and Nicolas who led our charge after another strong day for our Belgians. Hayden and John are right behind in fourth as the Kiwi crew continue to gain confidence.

It’s an intensifying battle that our Team Principal Michel Nandan is relishing: “We have a close podium battle between Thierry/Nicolas and Hayden/John which is going to make Sunday morning very exciting,” he says.

Having finished fourth in Wales in the past two seasons, we’re determined to go one better in this year’s event  and to continue our run of top-three results. The signs are encouraging: “I am sure our crews will give their all to make sure we achieve the best possible result,” adds Michel.

One of the added complexities of Saturday’s itinerary is the lack of lunchtime service or tyre-fitting zone. “It adds an extra strategic element,” says Michel, “which makes it a fascinating event. We’ve shown good pace on occasions, as perfectly shown by Thierry and Nicolas taking another stage win.”

Our Belgians triumph on the SS11 Gartheiniog stage came despite a close call just one stage previously. “We clipped a bank in SS10, which put us a bit out of rhythm,” explains Thierry, “but we went on to set the fastest time. We then controlled our pace, driving efficiently, to keep our hold on third place.”

Hayden and John found more consistency on Saturday and find themselves within touching distance of their colleagues Thierry and Nicolas. The conditions, once again, have not been ideal for the Kiwi crew.

“We had typical Welsh stages, very slippery but with more consistent grip levels than Friday,” said Hayden. “I’ve had to adapt my driving style so that’s been the main struggle. We made some changes during the day, which gave me a better feeling. We were just missing traction. It’s a close fight  let’s see what we can do on Sunday.”

Another crew who haven’t found a clear rhythm in Wales is Dani and Marc. Our Spaniards haven’t been able to mount a stronger challenge so far but are still holding a top-six position, nonetheless.

“It’s not been a memorable day for us,” admits Dani, “but we’re doing everything we can.” The difficulties have not stopped him from enjoying the stages: “They are wonderful,” he says, “we just haven’t been able to find the pace we need to fight higher up the classification.”

Sunday morning is made up of six stages run over a total of 52km. There are plenty of opportunities for crews to make up  or lose  valuable time, so expect plenty more action to come!

“As long as we’re on the podium tomorrow I’ll be happy,” smiles Thierry, “but there’s still work to do before we can think of that!”