Closing in on podium 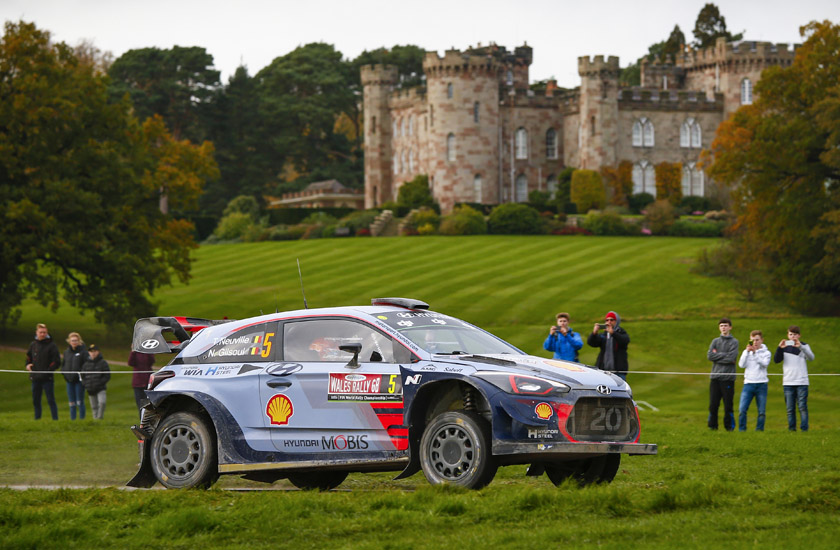 Our crews have been firmly in the thick of the action on the longest day of Wales Rally GB action.

The i20 Coupe WRCs were at the sharp end of the classification throughout Saturday as we claimed top-three times in each of the nine contested stages.

The gruelling itinerary began at 7.55am with the opening stage, Aberhirnant, and concluded over twelve hours later with a night run through Dyfnant. Daylight running made way for complicated fog in the evening, with several of our crews hitting the worst conditions.

Adding two more stage wins to their tally with strong runs through SS13 (Dyfi 2) and SS14 (Cholmondeley Castle), our Belgians had established a firm hold on second place. Unfortunately, despite fighting hard in the tricky fog conditions, they dropped to third overall, just 0.5s from championship leader Sébastien Ogier.

“Overall, it was a better day than Friday in terms of the driving, more consistent and we were able to make up a good chunk of time,” said Thierry. “We honestly could not have gone any faster.”

Andreas and Anders set five top-three stage times as they moved into fifth overall. Despite struggling with the position of their light pods on the tough night stages, our Norwegians are well placed for the final five stages.

“On the whole, we have had a good day,” reflected Andreas. “The daylight stages were particularly positive. We benefitted from a better starting position today so we wanted to capitalise on that and regain some time. We were able to achieve that and were not far off the lead times. The car set-up was amazing.”

Meanwhile, our Kiwi Hayden and his British co-driver Seb enjoyed a strong end to their Saturday, with the second best time in the Aberhirnant fog.

“It was the same conditions for everyone, but I was able to trust Seb implicitly on the pace notes, so we could push that bit more,” said Hayden.

It was certainly a better finish after they experienced a front-left puncture in SS9 (Dyfnant) and hydraulic issues in SS13 (Dyfi), which lost them time.

A tough day for our Spaniards Dani and Marc saw them drop to tenth overall. Despite finishing second in the short Cholmondeley Castle stage, it was a difficult Saturday.

Our Team Principal Michel is hopeful that we can put our run of misfortune behind us with a push for the podium: “Sunday’s stages will offer yet more challenges for all four of our crews, but I think we are in a strong position to fight for the podium, possibly with more than one crew. ”

Sunday’s itinerary is made up of five runs. The 10.41km Alwen and 6.43km Brenig stages will both be run twice, the latter as the Power Stage. Sandwiched in between will be the 7.49km Gwydir test, bringing the total distance for the final day to 41.17km.