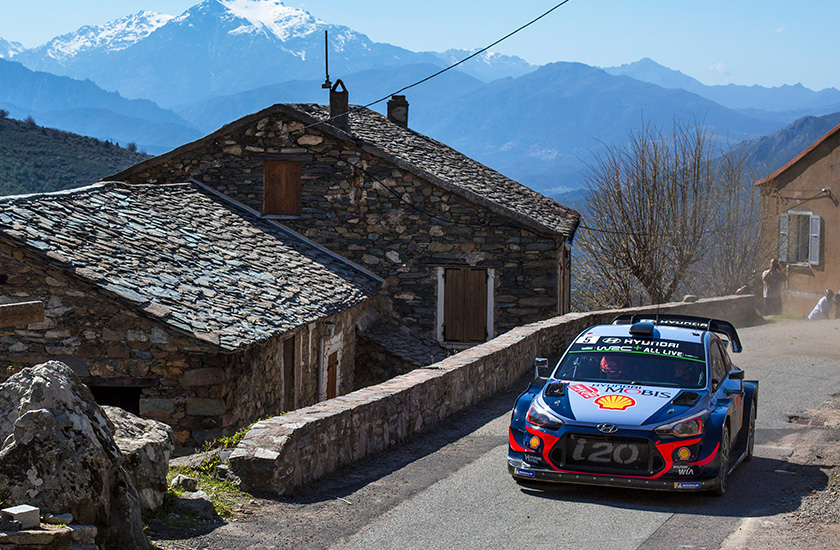 With only four stages contested on the opening day, Tour de Corse is truly a matter of quality over quantity. In a bid to emulate their own high standards from last season’s victory on Corsica, our Belgian crew Thierry and Nicolas hold a solid second place overall after Friday’s quartet of timed runs.

The first tarmac rally of the 2018 WRC season has been far from straightforward with all three of our crews struggling to get into a consistent rhythm. Aside from rally leader Sébastien Ogier, who has built up a 33-second lead, it was a similar story up and down the field.

“It hasn’t been the best of starts,” admitted Thierry. In the morning loop, we had no efficiency from the brakes but changes made at lunchtime service were in the right direction. We have had to accept we can’t match Ogier so far but we will keep attacking.”

The long and short of it

Friday’s itinerary included a repeated loop of the 49.03km La Porta  Valle di Rostino and 13.55km Piedigriggio  Pont de Castirla stages. Our two other crews, Spaniards Dani/Carlos and Norwegians Andreas/Anders, completed the 125km of stages down in seventh and ninth, but remained upbeat.

“I haven’t been very happy with our stage times today,” commented Dani. “The speed at the front is very fast but we will try to find more pace on Saturday to try and get into a top-five position.”

Andreas added: “Our day was compromised by one spin and a small off in the morning loop. A far from ideal way to start! I drove the car to the limits. Now we have found a better feeling, I hope we can be in better shape on Saturday.”

“It’s clear that we have been missing some performance,” acknowledged our Team Principal Michel. “With such long stages that are a special part of the Tour de Corse DNA, any lack of pace is punished over a greater distance. I hope we can mount a stronger fight on Saturday.”

“We have a small margin to third,” concluded Thierry. “Our target is to consolidate our second position.” With 136.90km of stages on Saturday, the longest day of the rally, anything can still happen!