i30 N TCR class of the field in WTCR 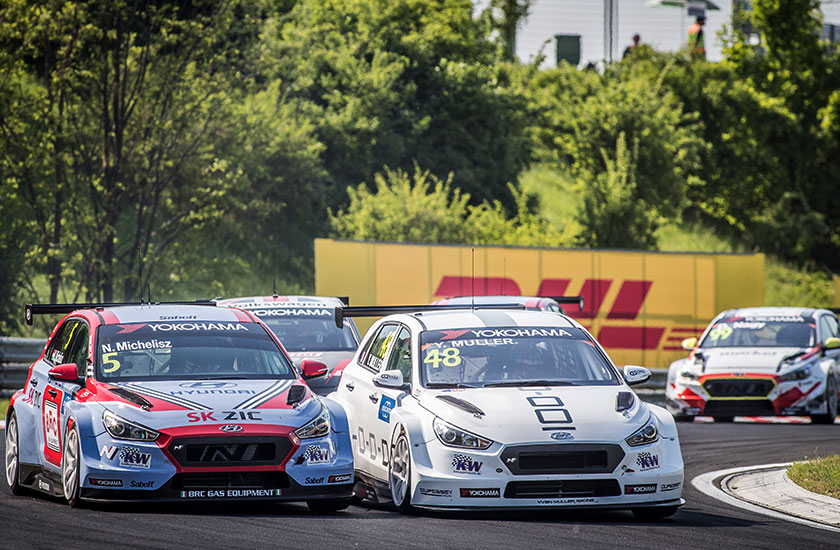 i30 N TCR class of the field in WTCR

Drivers competing in the latest round of the FIA World Touring Car Cup (WTCR) in Hungary with our i30 N TCR celebrated pole positions, podiums and a race win on another impressive and busy weekend for our customer teams.

Five i30 N TCR cars were entered into the Race of Hungary with the four full-season runners, competing for BRC Racing Team and Yvan Muller Racing, joined by M1RA wildcard entry Daniel Nagy.

BRC Racing’s Norbert Michelisz claimed consecutive pole positions in the two qualifying sessions, converting the first of those into a battling third place in the opening race.

There was more podium joy in the second race as Nagy, starting from the front row of the reverse grid, finished second. Despite carrying extra weight, as dictated by the WTCR regulations for wildcard drivers, Nagy finished just 0.5s from the race winner and ahead of fellow i30 N TCR drivers Yvan Muller in third and Gabriele Tarquini in fourth.

The i30 N TCR was the star of the third race with Tarquini, Michelisz and Muller leading a 1-2-3 podium clean sweep.

“In WTCR, the i30 N TCR continues to show at the very front of the category,” commented our Customer Racing Deputy General Manager Andrea Adamo. “The performance of the car in the championship is backed up by the pace of the teams and drivers competing in the national series.”

Three of our cars lined up for the opening round of TCR Italy in Imola with BRC Racing Team fielding two drivers. Defending champion Nicola Baldan also made his first start in a Hyundai after an off-season switch. A hard charging fifth place finish for Baldan, in race two, followed competitive performances in free practice and qualifying.

Meanwhile, in the USA, Hyundai America and Bryan Herta Autosport continued their strong start to the Pirelli World Challenge season at Virginia International Raceway. Michael Lewis recovered from a red flag in qualifying to charge through the field from 14th to second in the opening race. Fastest lap gave him pole position for the second event alongside his teammate Mark Wilkins, who went on to secure victory.