Ten podiums in three championships for our i30 N TCR customers 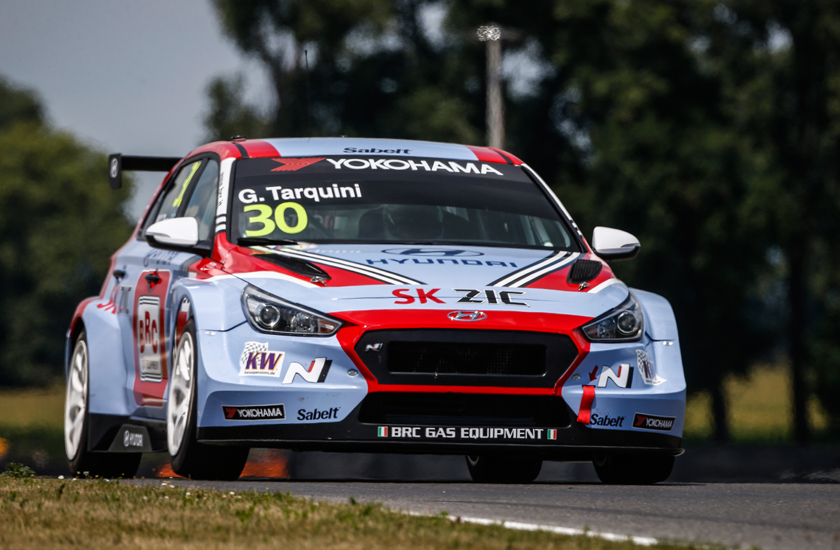 Ten podiums in three championships for our i30 N TCR customers

A spectacular weekend of action around the world saw the most competitive showing yet for our i30 N TCR customers. Drivers secured ten podium finishes in three separate series with hard fought racing in Slovakia, USA and Italy.

Two on top in WTCR

BRC Racing Team drivers Gabriele Tarquini and Norbert Michelisz each took a victory as the FIA WTCR series visited the Slovakia Ring. Gabriele won Race 2, while Norbert secured his first ever top-spot in our i30 N TCR in dominant fashion. He completed a Grand Slam with pole position, fastest lap and victory.

Over in the USA, the Hyundai America supported Bryan Herta Autosport team delivered a fifth win from seven attempts in the opening race of the Rose Cup weekend at Portland International Raceway.

Mark Wilkins and Michael Lewis secured a fourth 1-2 of the 2018 season for our i30 N TCR, before Michael repeated his second place in Race 2.

Fight at the front in Italy

Our i30 N TCR was at the front of the pack in TCR Italy at Mugello. The front row of the grid for the opening race was an all-Hyundai affair with Pit Lane Competizione’s Nicola Baldan on pole with BRC Racing Team’s Eric Scalvini in second.

Both drivers led at different points of the race. Nicola made a final lap move that ended with a drag race to the finish line. He ultimately missed out by 0.04-seconds ahead of Eric in third. In Race 2, Nicola mounted a challenge for the lead from seventh on the reverse grid, after a safety car period on the opening lap.

Earlier in July, i30 N TCR drivers won both races at the fourth round of the TCR Europe championship at Hungaroring. Target Competition’s Duan Borkovi? scored his third win of the season in Race 1, while Francisco Mora took a first win at the wheel of our i30 N TCR in the second race. He was joined on the podium by his M1RA teammate Daniel Nagy, who completed a Hyundai 1-2 at the squad’s home event.

“The results of our TCR customers have been incredible,” said our Customer Racing Deputy General Manager Andrea Adamo. “For Hyundai drivers and teams to be leading the FIA WTCR proves that the car delivers strong pace on a wide variety of circuits.”