Dani makes it three podiums in three events for our team with a third place finish in Mexico while Hayden Paddon holds onto fifth to make it two HMSG drivers in the top five! 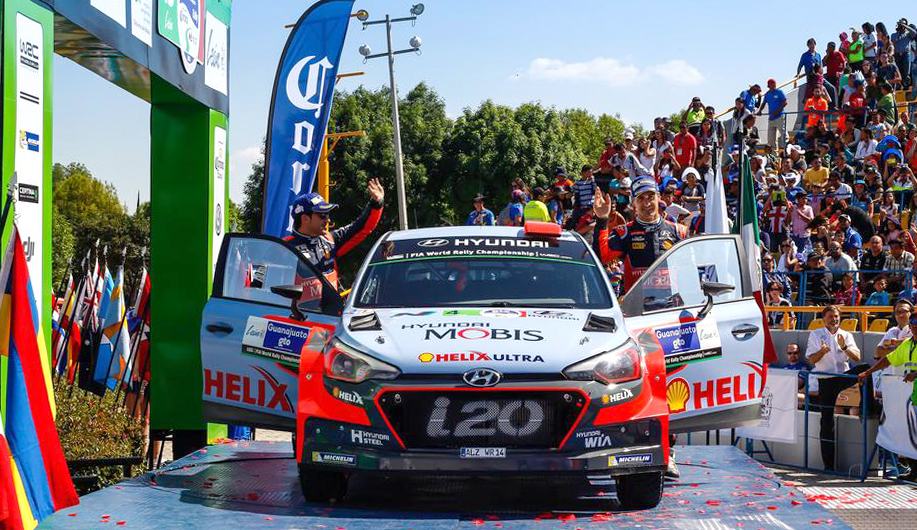 Dani makes it three podiums in three events for our team with a third place finish in Mexico while Hayden Paddon holds onto fifth to make it two HMSG drivers in the top five!

March 6, 2016  We have achieved our goal of three consecutive podiums in three events after Dani’s solid third place finish at Rally Mexico, third round of the 2016 FIA WRC.

Today saw two stages run  the gigantic Guanajuato, which at 80km is the longest of the whole WRC season, and Agua Zarca as the rally’s Power Stage.

Dani’s third-place finish marks his first podium of 2016 and follows Thierry Neuville’s third place in Monte-Carlo and Hayden’s second place in Sweden meaning that each of our driver crews have now taken a top-three finish this season.

Dani drove steadily under pressure today and took third on Guanajuato today. Despite some issues during the rally he kept focus and took regular top-three stage finishes over the weekend to maintain third overall.

“I am delighted to be on the podium here in Mexico and to take my first top-three finish of the season,”declared the Spaniard. “This is a very complicated and challenging rally, so we have had a few complications along the way, but I think this is the same for everybody. We just got on with our job and learned a lot about the performance of the New Generation i20 WRC in these conditions, which will be very helpful for the future. We ended Saturday with a relatively comfortable hold of third place so we knew we would have to take it easy on the long Guanajuato stage and in the Power Stage, just to bring the car home. We didn’t push and we can be happy with this result. It hasn’t been an easy rally for the team so it is nice to have the chance to celebrate a podium after all their hard work. We have some things we will learn from this weekend but overall we have a lot to be pleased with. We now look forward to Argentina with enthusiasm.”

Hayden’s Sunday runs added to an overall positive event for the Kiwi. He drove smoothly to hold fifth place and claimed an extra Championship point after finishing third in the Power Stage.

“It’s been an eventful rally and there hasn’t really been much time to take stock,” commented the Kiwi.“Whether it’s been making the right tyre choice, dealing with suspension damage or just learning new stages with the New Generation i20 WRC, the Mexican stages have certainly kept us busy. There are definitely lots of positives to take away from the weekend, and we’re quite pleased to have met our pre-rally aims of finishing inside the top-five. We were all looking forward to this morning’s monster stage and it was a really interesting experience, how to look after the tyres and the brakes over 80km. In hindsight, we might have been able to push a bit more, but we wanted to keep hold of our fifth place so I’m happy with our job. We wanted to give a bit of a push in the Power Stage to try and take an extra point, so that was a nice consolation. The team is also to be commended for their efforts this weekend. It’s been a long, hard rally for everyone so it’s nice to leave here with Dani on the podium and two cars in the top-five.”

Two years after Thierry scored our first ever WRC podium in Mexico, we now leave with another top-three. It is a satisfying result on the challenging Mexican stages with our new car, the New Generation i20 WRC.

“It is a great feeling to finish with two cars inside the top-five  and to score a hat-trick of podiums with Dani in third place,” commented Team Principal Michel Nandan. “We have now seen each of our driver crews on the podium this year  and we’re only three events into the season. The results are great but they don’t necessarily tell the story of what has been an incredibly tough rally. We’ve had the longest stage of the season  the 80km run this morning  as well as tough conditions, which have really put the New Generation i20 WRC under pressure. We’ve learned a lot about the car this weekend with some room for improvement but a generally satisfactory performance. The cars have survived a difficult rally, which can only give us optimism for the rest of the season. Well done to Dani and Marc for their fantastic podium, Hayden and John for their fifth place, and to the entire team for a professional job in the circumstances. Of course, it’s a shame that Thierry couldn’t complete the rally but he’s feeling determined to fight back in Argentina. We said we’d be able to evaluate the performance of our New Generation i20 WRC more accurately after the first three rounds, and with podiums in Monte-Carlo, Sweden and now Mexico, we have to target the top-three in all remaining events of the season. It’s an ambitious target but I think we’ve shown we have what it takes, even in the harshest of rallies.”

Now we look to Rally Argentina, the fourth round of the 2016 FIA WRC that takes place 21-24 April.