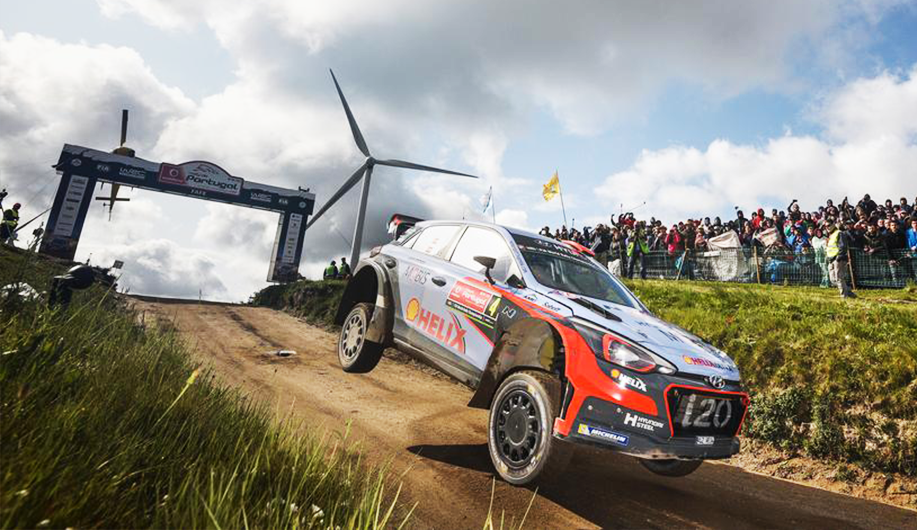 May 22, 2016  It’s been one of the toughest rallies of the season so far but we’ve come away from Rally de Portugal with fourth place  our best ever finish in the Portuguese event.

There were four stages left to contest on Sunday morning with Vieira do Minho and the legendary Fafe stages each run twice. The Fafe test includes one of the most thrilling jumps on the WRC calendar  and our drivers Dani and Thierry certainly put on a good show.

Three in a Row

Dani enjoyed a trouble-free final day to take the #4 New Generation i20 WRC to fourth place overall. It was his third fourth-place finish in a row, and scores valuable points for our team.

Our Spanish crew had a strong run this weekend. Although the podium had looked likely after an encouraging Friday, the duo dropped down the order on Saturday. They sensibly focused on securing fourth place in today’s stages.

“It was a steady end, and our aim was to bring the car home safely,” Dani said. “We weren’t able to do anything about the gap to the podium so we took no risks. We’ve taken important points for the team.”

The classic Fafe test was one of the highlights of the final day. A fantastic turnout of local Portuguese and travelling Spanish fans made an electric atmosphere with the numerous wind turbines providing a dramatic backdrop.

“I enjoyed the stages,” continued Dani. “It’s always incredible to compete in a World Rally car in front of such enthusiastic spectators.”

Thierry also enjoyed putting his New Generation i20 WRC through its paces on the famous Fafe jump!

“We tried to have a bit of fun on the final stages,” he said. “The Fafe jump was as enjoyable as ever, although we had a bit of a harsh landing on the first pass!”

Our Team Principal Michel Nandan was also quick to praise the rally: “It was a trouble-free and safe end to our rally today with the famous Fafe jump providing a lot of excitement for the fans. It’s a pleasure to be part of this event.”

Thierry and Nicolas put Saturday’s disappointment behind them as they completed the event under Rally 2 today. The Belgian crew are already planning a comeback at the next event in Sardinia  with happy memories from last year.

“It’s been a challenging weekend for all of us in the team,” he admitted. “We showed reasonable performance with the New Generation i20 WRC but there are still things we can improve and we’ll work hard as a team to achieve that. The next rally is Sardinia where we finished on the podium last year  and that’s going to be our target again.”

Michel gave a typically honest assessment of the weekend.

“We can’t really be pleased with our weekend,” he said. “But it’s a small consolation that we’ve taken our best ever Rally Portugal result. We couldn’t have done more but it’s frustrating that we had so many issues along the way.”

Hayden and Kevin’s retirements on Friday were a prelude to more disappointment on Saturday. Kevin re-joined under Rally 2 but could go no further than the opening stage after hitting a rock. Then, problems with refuelling caused Thierry to stop midway through SS11.

“There are some areas to work on in terms of car performance,” added Michel. “We also have to look at some areas of our operation to make improvements already from the next event.”

He concluded: “This weekend is a reminder that WRC remains fast, competitive and exciting  and we have to keep on top of our game at all times!”

WRC returns to action in just a few weeks as Sardinia hosts round 6 of the Championship from 10-12 June.