Hyundai Shell World Rally Team had a strong start to Fridays opening loop with Thierry Neuville and Juho Hänninen claiming a Hyundai 1-2 in SS2 and SS3. 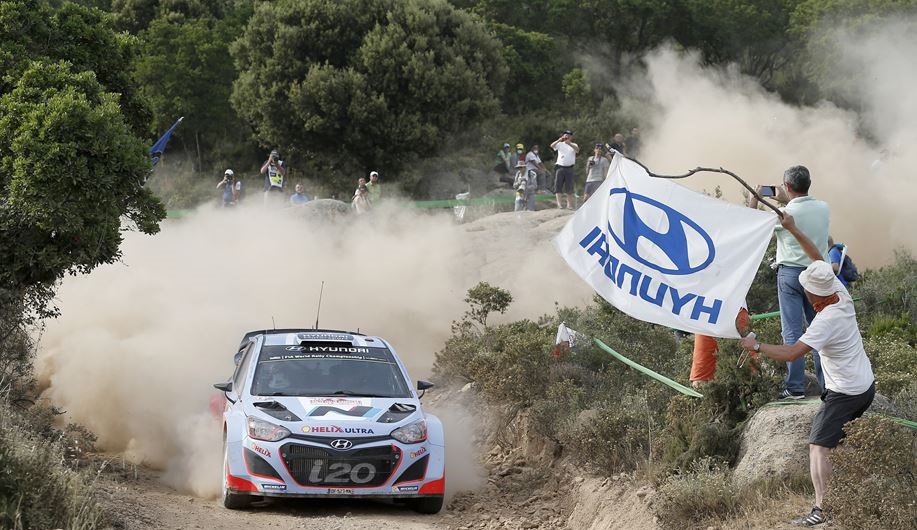 Hyundai Shell World Rally Team had a strong start to Friday’s opening loop with Thierry Neuville and Juho Hänninen claiming a Hyundai 1-2 in SS2 and SS3.

June 6, 2014 – It has been a day of two halves for the Hyundai Shell World Rally Team at Rally Italia Sardegna today after a chaotic SS5 overturned the team’s bright start to the rally.

In just its sixth event in the FIA World Rally Championship, the team registered its debut 1-2 finishes in a special stage on Friday morning, topping the overall classification after the fourth stage. Unfortunately, the harsh reality of competitive rally returned with a vengeance in SS5, affecting all three driver crews.

Thierry Neuville (#7 Hyundai i20 WRC, co-driver Nicolas Gilsoul) had started his sixth rally with the Hyundai Shell World Rally Team in high spirits, taking second place in Thursday’s Super Special Stage in front of a packed crowd in the Sardinian capital, Cagliari. The Belgian went on to claim an impressive stage win in SS2 (Terranova Nord 1) and an additional two runner-up results in SS3 (Terranova Sud 1) and SS4 (Coiluna-Crastazza 1) to lead the rally heading into SS5 (Loelle 1).

Just 4km into the stage, Neuville was forced to stop following an issue with the suspension but he was able to fix the problem and re-enter the stage, albeit losing 23 minutes of time. The team’s mechanics checked the car over during the short remote service and Neuville was able to continue onto the repeat loop. Unfortunately, finishing the day down the overall classification means that the Belgian will have a tough battle on Saturday as one of the first on the road.

Neuville said: “The first stages went well today. We had a good position on the road, a good tyre choice, and we were really able to take advantage of this. We then experienced an issue on SS5, which we realised we could repair on the stage. It took some time but we were finally able to make it to the service. In the afternoon, I made some set-up changes in order to adapt the car to the rougher conditions. We will see what tomorrow brings.”

The team’s Kiwi crew Hayden Paddon and John Kennard (#20 Hyundai i20 WRC) adopted a deliberately cautious approach to their debut rally with the team and enjoyed a challenging, but relatively trouble-free day. Paddon, keen to learn as much as possible around the tough Sardinian stages, took a measured approach in both loops and fought hard in tough conditions.

He lost considerable time at the start of SS7, the repeat Terranova Sud stage, when he picked up a puncture and was forced to complete much of the 12.4km stage with a deflated front right tyre. He ended the day just outside of the top ten overall.

Paddon said: “It is fantastic to be part of the team at this rally and to complete our first full day of stages with the Hyundai i20 WRC. It’s not the easiest rally because the roads are very technical but we’ve achieved our objective of getting through the day. We have tried to find a good rhythm but it’s hard to know where the good grip is so I’ve lacked a bit of confidence. We got through relatively unscathed, apart from a puncture in the afternoon (SS7). I just clipped a rock on the inside corner at the start, so we drove 11kms with a front puncture, which is a testament to the performance of the tyres. We’ll make a few set-up changes tonight to see if we can learn something more but I’m looking forward to tomorrow’s stages.”

Juho Hänninen (#8 Hyundai i20 WRC, co-driver Tomi Tuominen) was on good form in Thursday’s SSS1 in Cagliari and in this morning’s opening stages. The Finn claimed second place in the first stage of Friday morning, SS2, before claiming a stage win in SS3 to lead the rally overall at that point. The result marked the first time for Hänninen to lead a World Rally Championship event in his career and a very positive double 1-2 for Hyundai Shell World Rally Team to start the day.

Drama struck for Hänninen in SS5, around 5km from the end of the stage, when he lost control of the Hyundai i20 WRC and rolled. Thankfully, neither Hänninen nor Tuominen were injured in the incident but the extent of damage meant that the car was unable to continue and the team has been forced to fully retire the car from the rally.

Hänninen commented: “The morning started well. We had a good starting position and a good tyre choice, so the opening stages were going quite well. On SS5, we approached a right hand corner very fast and I lost the front, went wide and rolled many times. It took me by surprise but I realised after that there was a slight dip, almost like a rut, which caught me out. I should have noticed this from the recce but I have to learn from this for the future and be stronger. The good thing for us to take away from today is that we took a stage win and led the rally this morning. I’ve never led a WRC rally before so this is a positive. It’s just a shame that the rally ended like it did.”

For Hyundai Shell World Rally Team, whose objective for this event was to complete the rally with three cars, there was equal cause for optimism as there was for disappointment after a day of ups and downs.

Team Principal Michel Nandan said: “We had a number of encouraging performances this morning. Admittedly, we were able to benefit from running slightly later in the order and benefit from cleaner road, but still the drivers did a good job. We took our first ever 1-2 finishes in two stages which was certainly satisfying in our sixth event. We have been running three cars today so the team has done a great job, particularly facing a few issues in the afternoon. Thierry had an issue in SS5 which lost him a lot of time but he fixed the problem and was able to make it to remote service where the team made sure he was in a condition to finish the day. Juho had a big crash in the same stage, in which he and Tomi were thankfully not injured. The car is regrettably too badly damaged to continue the rally so we have retired it. Hayden has done a solid job on his first full day of rallying with the team. It was a challenging start for him but, like our team, he is happy to embark on a steep learning curve. We will continue with two cars tomorrow and focus on adding more to our experiences here in Sardinia.”