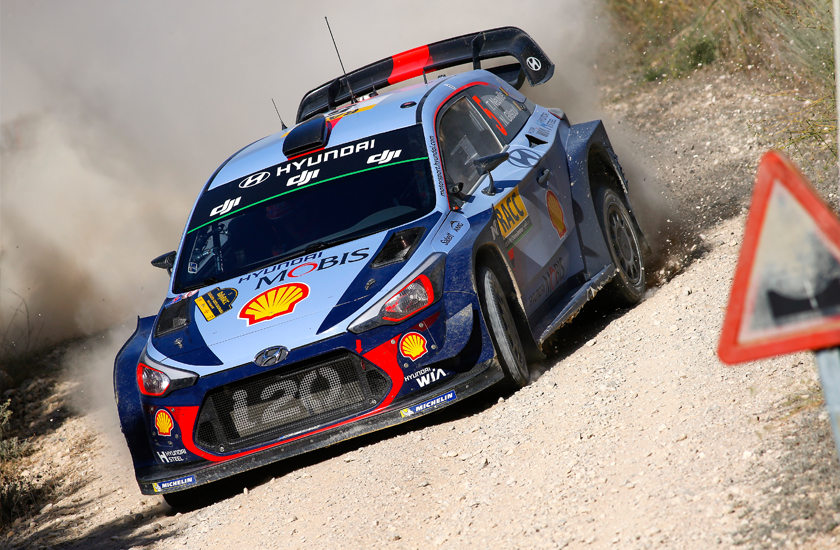 Fortunes can change quickly in the fast and furious World Rally Championship, and we certainly experienced that on the penultimate day of Rally de España. All three of our crews ran into difficulties during Saturday.

“A very bad day,” summarised our Team Principal Michel. “What more can we say? Luck is definitely not on our side.”

Our Belgians Thierry and Nicolas were first to hit trouble, as they experienced hydraulic issues at the end of SS8 (El Pont d’Armentera 1). As they stopped to investigate the issue, the duo struggled to restart the car.

Once underway, they pushed hard to make the next stage, SS9 (Savalla 1), but a spin, caused by the lack of hydraulics under braking, caused rear damage. They arrived three minutes late to the stage and incurred a 30-second time penalty.

“The problem was caused by a broken pipe,” explained Michel. “The team did a great job at lunchtime service to change the hydraulic systems and repair the damage.”

The crew was immediately on the pace in the afternoon loop, claiming a stage win in SS10 (El Montmell 2). “I honestly think we deserved far better than we got today,” said a disappointed Thierry. “The rally is not over but it was another frustrating day, and not representative of what we know we can achieve.”

Rock and a hard place

Dani and Marc set a string of competitive stage times on Saturday to be involved in a close fight for second place overall. Unfortunately, it was an abrupt end for our Spanish heroes as they hit a hidden rock in SS12 (Savalla 2), causing suspension damage to their i20 Coupe WRC.

“To say this has been a disappointing day would be an understatement,” said Dani. “We had been driving well and setting ourselves up for a podium push. We will try to get back into a rhythm on Sunday but we know we could have scored a really good result.”

After leading the rally on Friday evening, our new recruits Andreas and Anders hit exactly the same rock as Dani and Marc in SS12, and their day ended in the same dramatic fashion.

Andreas commented: “It was a much steeper learning curve but it certainly wasn’t the way we wanted to end the day. Tarmac requires a very precise approach. I am just not familiar enough yet with the i20 Coupe WRC to get everything out of it. Sunday will be another useful day for us.”

Promise of a new day

Sunday’s six-stage schedule will offer no respite for the participating crews with no mid-leg service. A 7am local start begins with the 6.28km L’Albiol stage followed by the 16.35km Riudecanyes and 14.50km Santa Marina tarmac tests.

The trio of stages is repeated later in the morning with a build-up to the all-important Power Stage. “We know anything can happen on the final day,” concludes Michel, “especially with no service. We have to keep the pressure on.”