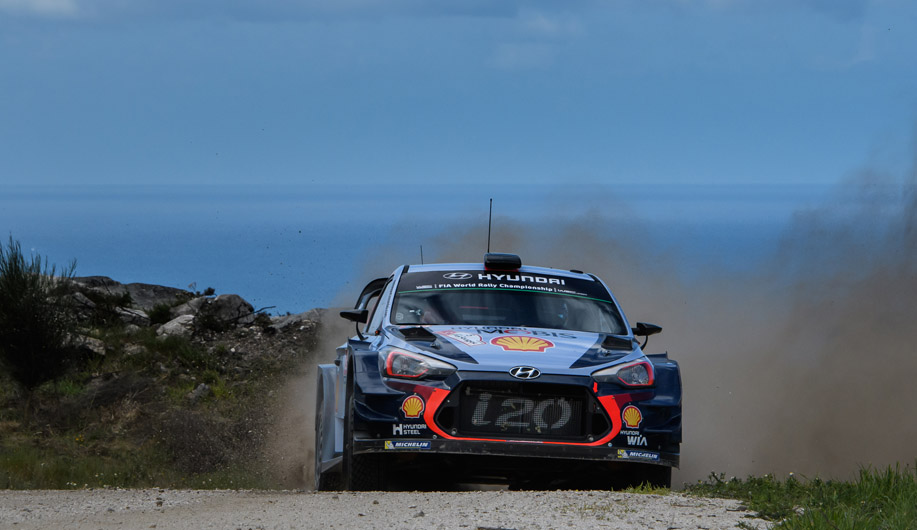 We have made another important step towards our weekend objectives in Rally Portugal, with two of our crews comfortably holding podium positions.

Thierry and Nicolas scored two more stage wins on Saturday as they positioned themselves as the closest challengers to rally leader Sébastien Ogier.

“We have done all we can to stay in touch,” said Thierry. “Ogier has been out of reach in some stages which allowed him to build a healthy lead. We’re pretty happy to be second after our tough Friday.”

Our Team Principal Michel was honest in his assessment of the day: “It is a case of so near, yet so far,” he said. “It seems we are missing a bit of performance compared to M-Sport and to Ogier, who has been doing a fine job. However, on the whole, I am pretty satisfied.”

The penultimate day saw crews tackle a repeat loop of three stages in hot conditions. Each loop gradually increased in stage length with the 17.43km Vieira do Minho followed by the 22.30km Cabeceiras de Basto and 37.55km Amarante tests.

Another of our crews who can be satisfied with their Saturday is Dani and Marc. They had a consistent run through the six stages to retain hold of a top-three place.

“We are reasonably content to be in a comfortable podium position,” admitted Dani. “I tried my best but I wanted to put up more of a battle for the lead than we were able to.”

While our #5 and #6 crews find themselves in good shape for the podium, it was another disappointing day for Hayden and Seb.

After re-joining under Rally 2 on Saturday morning, they were determined to show their true pace. Even running second on the road, their times were strong. But they experienced more drama in the afternoon loop.

“It seems our bad luck continues,” lamented Hayden. “We knew it would be tough but we put on a good show for the fans. In the afternoon, we experienced a steering rack problem that ended the day early. We’ll try again on Sunday.”

Sunday’s schedule sees four stages run over a total distance of ‘just’ 42.93km. The fans will be flocking to Fafe for the famous jump, while we will be aiming to keep our feet on the ground.

“We hope the amazing crowd support will spur us on to finishing on the podium,” concluded Michel, “preferably with two cars. That would be a dream result  but there are a few more hurdles to overcome on Sunday’s stages!”