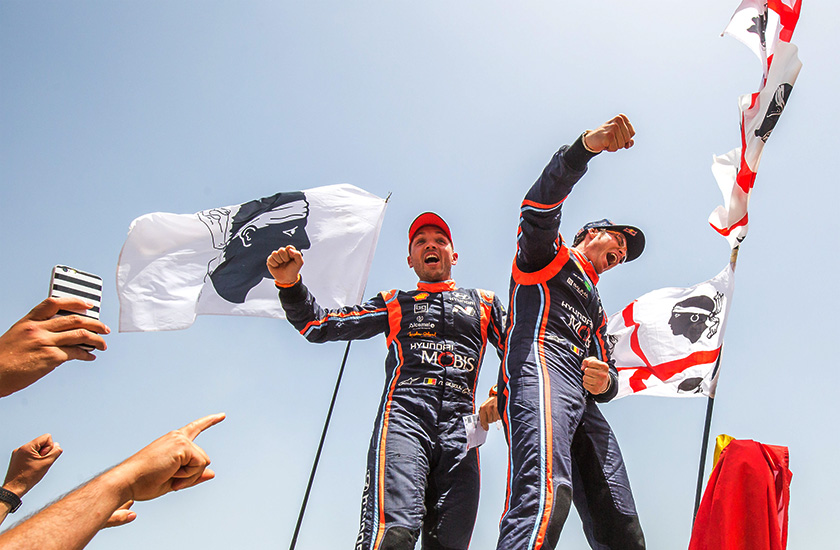 The 2018 edition of Rally Italia Sardegna will go down as one of the most thrilling WRC rounds in history after Thierry and Nicolas claimed a sensational win by just 0.7-seconds.

Taking a clean sweep of stage wins, including the Power Stage, our Belgian crew steadily overturned a 3.9-second deficit to Sébastien Ogier to take their third victory of 2018 in dramatic style.

“We knew we had to give it everything we had,” said a jubilant Thierry. “It was a truly fantastic fight with Seb. This is a precious victory and we send massive thanks to the whole team for giving us a great car.”

Intense and in tenths

The gap of 0.7 seconds is one of the closest finishes of all-time, matching the same result from Rally Argentina in 2017 when our Belgians beat Elfyn Evans. The result is our tenth WRC victory in total and our 40th individual podium result.

Our Team Principal Michel was full of praise for the performance. “I am completely delighted,” he said at the end of the Power Stage. “It was a perfect win. I was on the edge of my seat, like the rest of the team. It is the ideal way to head into the summer break.”

There were more causes for optimism elsewhere on the final morning. Hayden and co-driver Seb finished in fourth, their best result of the season to date, while Andreas and Anders salvaged two points from a difficult weekend, finishing fourth in the Power Stage.

Staying out for the summer

“We gave it all we could in the Power Stage to salvage something from a frustrating weekend,” said Andreas. “We leave Sardinia with a feeling of missed opportunity but we will be ready for Finland.”

“We wanted more from this event but to take fourth gives us important confidence,” added Hayden. “It was nice to finish Rally Italia Sardegna for the first time in three years and to score important points of the manufacturers’ championship.”

Winning our second rally in a row after Portugal, we have extended our lead in the classification to 212 points with M-Sport Ford on 184. With five extra points for his Power Stage performance, Thierry has taken a maximum 30 to increase his advantage in the drivers’ table to 27 over Ogier.

“One of the finest wins of our career,” concluded Thierry. “Leading both championships heading into the break gives us all the motivation we need for the second half of the season!”

2018 FIA World Rally Championship for Drivers’ Standings
After round 7

2018 FIA World Rally Championship for Manufacturers’ Standings
After round 7