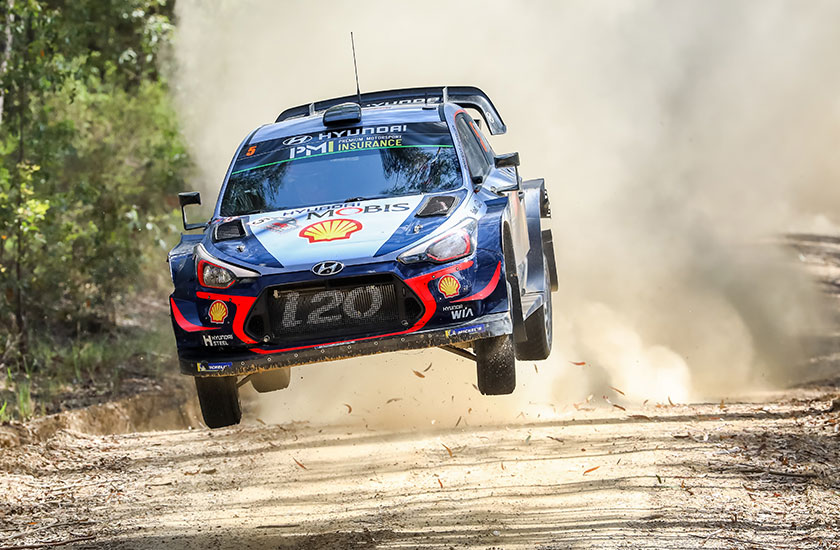 Our hopes of securing a maiden WRC title took a knock on the opening day of Rally Australia, the final round of the 2018 WRC season.

There was drama for two of our crews on Friday; Andreas and Anders were forced to retire on the morning loop, while title contenders Thierry and Nicolas dropped to 30 seconds behind rival Sébastien Ogier.

Returning to the i20 Coupe WRC for the first time since Wales Rally GB, Hayden and Seb enjoyed a strong start ‘down under’. A consistent and competitive Friday helped the crew to within 12.5-seconds of rally leader Mads Østberg and just 3.8 seconds from the podium.

“We have had a nice clean day and find ourselves involved in a close fight at the front,” said Hayden. “The feeling inside the car has been pretty good on all stages.”

With all eyes on the three-way championship battle, our Belgians were determined to gain the upper hand. Holding an advantage over Ogier heading into lunchtime service, a stage win in SS5 (Coldwater II) reinforced their determination. However, trouble hit on the following stage (SS6 Sherwood II) as the pair lost significant time after a tyre came off its rim on landing after a jump.

“We can’t lose our hopes despite what’s happened,” said Thierry. “Although our championship chances are now reduced, we don’t know what’s going to happen over the next two days. We will continue to drive and see where we end up on Sunday.”

Unfortunately, it was game over before lunchtime for Andreas and Anders. Our Norwegians had to take evasive action to avoid a tractor in the middle of a chicane during SS3 (Sherwood I). The distraction caused them to go off the road, and resulted in a terminal water leak. The crew will re-join under Rally 2 on Saturday.

“What happened today pretty much sums up my season,” said Andreas. “This has destroyed a really important rally for us. It’s a shame because we were feeling comfortable and doing well up to that point.”

Our Team Principal Michel summarised: “A lot has happened today but we have two long days yet to contest.”