Finding the positives in Germany 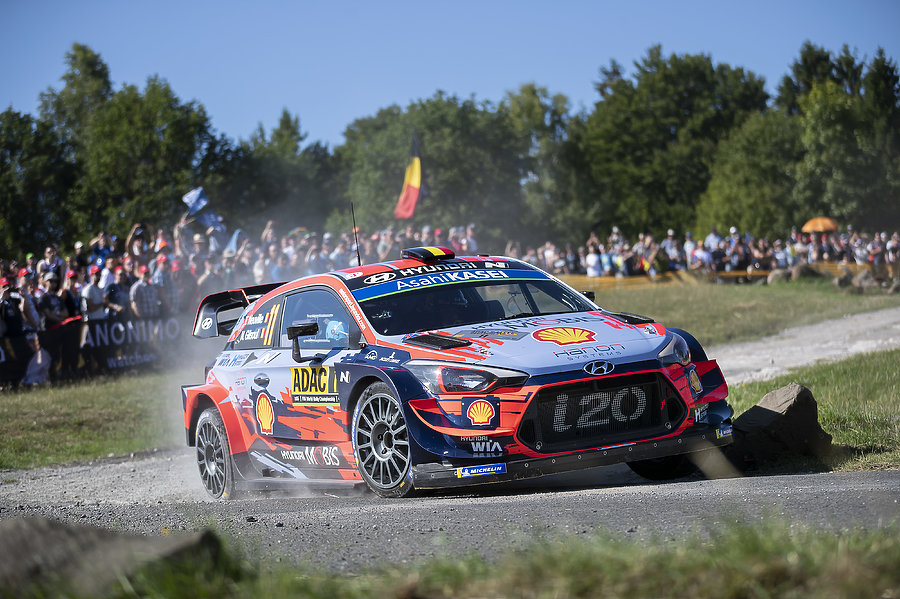 We have completed Rallye Deutschland, our home event, with all three of our crews inside the top-six, but the improved pace of our i20 Coupe WRC promised to deliver so much more.

Thierry and Nicolas got off to a competitive start, taking two stage wins on Friday to move into close contention for the lead. Our Spaniards Dani and Carlos were also on fine form as they chased down the top-three.

Their hunt for a provisional podium was hit by a transmission problem on the Wadern-Weiskirchen stage, dropping them down to ninth. “Hugely disappointing,” was Dani’s assessment. “Unacceptable,” said our Team Director Andrea.

Never ones to be knocked down, the pair returned with intent on Saturday and immediately laid claim to a stage win in SS8 (Freisen).

Our Belgians, meanwhile, were involved in a game of ‘cat and mouse’ with the rally leader. The gap between the crews was just five seconds heading to lunchtime service.

While the afternoon began well, there was drama in the first run through the fearsome 41.17km Panzerplatte test as Thierry/Nicolas picked up a puncture. Despite changing the left-rear in an impressively quick time, the 84 seconds lost pushed them out of the victory charge.

Sunday’s itinerary was not a straightforward stroll through the vineyards for crews with 80km of special stages left to contest. Our crews were at the heart of the action. Thierry and Nicolas led a 1-2 in both runs through Grafschaft, ahead of Dani and Carlos, while also putting in a masterful performance in the Power Stage.

Ultimately, the Belgians were classified in fourth. “We have given absolutely everything possible this weekend. To be honest, we could have fought for the win this weekend, but we were just unlucky with the puncture in Baumholder. It is part of the game.”

Our Spaniards took fifth place and focused on the positives. “The most important thing is the improvements made to the car performance on tarmac,” said Dani. “We are now competitive on this surface, and this is thanks to the hard work of the team.”

A steady weekend for Andreas and Anders resulted in sixth place and valuable progress. “For our first tarmac event of the season, it was never going to be an easy one,” said Andreas. “We have worked a lot on improving our feeling with the car, the driving style and adapting to the varied tarmac stages. We have taken some steps but it’s still not perfect.”

With four rallies left on the calendar, we remain at the top of the manufacturers’ championship with an eight-point lead. For Andrea, there are important lessons to learn. “Thierry and Nicolas were fighting for the lead of the rally before their puncture on Saturday. I don’t think anyone would have expected it to be so close prior to the start of the weekend,” he said. “Dani and Carlos, too, have been on strong form. Without a reliability problem, they would surely have been in the mix. This is where we cannot be happy.”

He added: “We have to be in control of our own destiny, and that means being high-performing and reliable in every single area of our operation. So, in summary, our car performance in Germany has been good but our team performance has not. We have to do better.”

WRC action moves back to gravel roads for the next round, Rally Turkey, from September 12-15.

2019 FIA World Rally Championship for Manufacturers’ Standings
After round 10

2019 FIA World Rally Championship for Drivers’ Standings
After round 10