Firmly in the Fight for Victory

Three cars in the top-four after strong Saturday in Spain 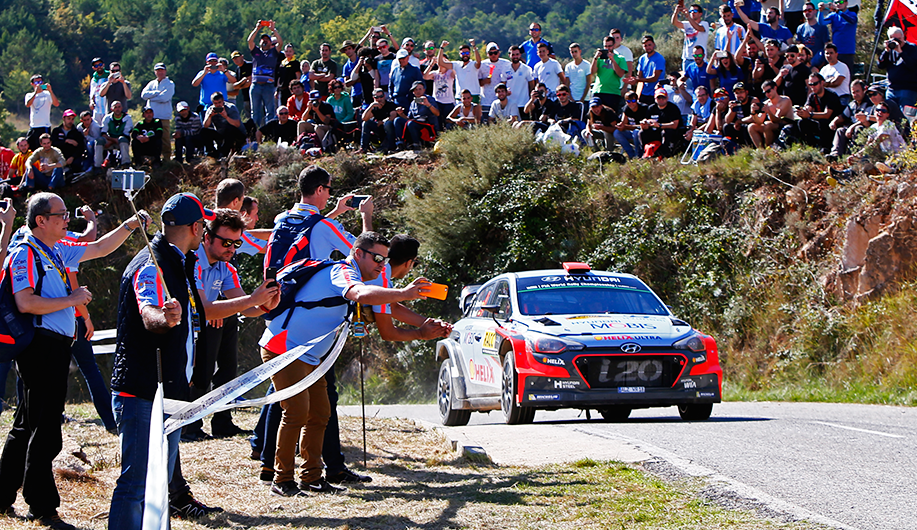 Three cars in the top-four after strong Saturday in Spain

“I always want to do my best but maybe just a little bit more when I’m at home.” Those were the words of our home hero Dani ahead of this weekend. The local fans have definitely got something to cheer for as our Spanish stars are in firmly in the hunt for the win in Rally Spain.

It was another strong day for Dani and co-driver Marc as they set four top-two stage times. Unfortunately, they were forced to relinquish their lead after a big push from Sébastien Ogier during the day. They didn’t give up without a fight, though!

“I was disappointed to lose the lead of the rally,” said Dani. “We knew it would be a tough challenge. We defended well but there wasn’t much more we could do. It’s very easy to make mistakes if you push too hard. I’m not one to give up. It’s our home rally so we want to win for all the Spanish fans.”

Three out of Four

Dani and Marc led a trio of New Generation i20 WRC cars inside the top-four at the end of Saturday. Thierry and Nicolas moved up into third place after a trouble-free day in the #3 car. Our Belgians were chasing down Andreas Mikkelsen until the Norwegian suffered an unfortunate off during the afternoon loop.

“The battle with Andreas was poignant,” said Thierry, “not only because we are friends but also because we’re involved in a close fight for second in the Drivers’ Championship. We were already putting pressure on before he went off. It’s nice to be in the podium positions.”

Hayden and John also benefitted by one place to jump up to fourth after an encouraging Saturday.

“Consistency has been the word of the day for us,” said Hayden. “We’ve been in or around the top-six in most stages. Things feel better than in Corsica although we’ve still had to work hard to adapt to the conditions and to the car.”

Our drivers were also quick to praise the work of the team mechanics, who had just 75 minutes of service on Friday to change our four cars from gravel to asphalt specification. It was another fantastic job and essential to prepare for Saturday’s eight tarmac tests.

The fourth in our quartet of cars for Rally Spain was once again in the hands of Kevin and co-driver Seb. They made more progress in the #10 i20 WRC, moving into the top-eight overall.

“A really enjoyable day,” said Kevin. “I have felt my confidence grow inside the car with each stage. The rhythm has been getting better and better. We found a few things to try for Sunday. To be in the top-eight is great and something we want to defend.”

Our Team Principal Michel has more ambitious targets for Sunday: “From a Championship perspective, we’re looking at a healthy collection of points if things stay like this. We will still push for the win tomorrow. Anything can happen at the front so we’ll be there to capitalise if it does.”

There are just four stages left  a repeat loop of the 19.30km Pratdip and 12.10km Desaigües asphalt tests. A total of 62.80km kilometres  and lots still to play for!