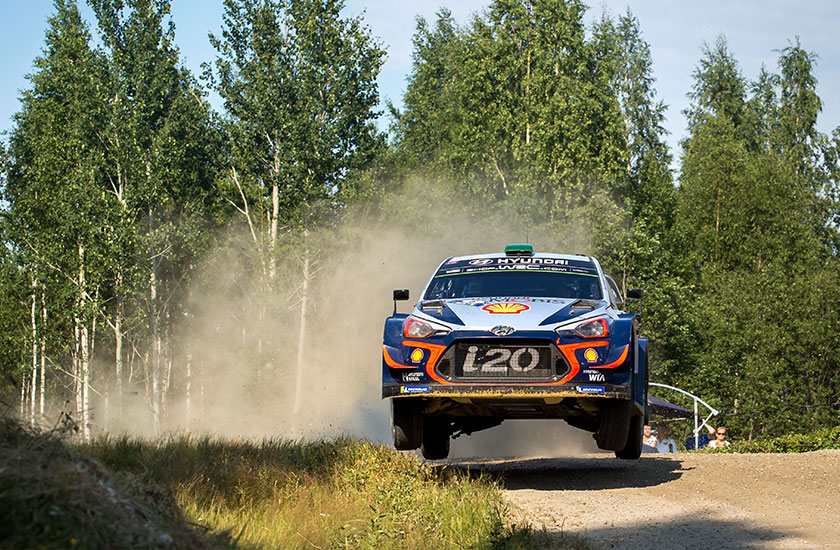 Finland has never been our most successful event but we are still hopeful of fighting for our first-ever podium in the Jyväskylä based rally this weekend.

Hayden and Seb had a solid start on the high-speed gravel stages to hold fourth overall, 13.3-seconds from the top-three.

“I think we can be pretty happy with our opening day, even if we could have probably taken a few more risks,” said Hayden. “We’ve been consistent, had good pace and that’s allowed us to stay in touch.”

In the hot seats

Following Thursday evening’s opening test at the 2.31km Harju, we moved onto a busy Friday with 126.37km of competitive running in extremely hot conditions.

Our championship leaders Thierry and Nicolas had the disadvantage of being first on the road, cleaning the dusty gravel roads for their rivals. They battled to a top-ten finish at the end of Friday, losing time in SS5 (Äänekoski 1) after going into a ditch.

“Starting first on the road makes life really tough from the outset,” commented Thierry. “Things weren’t helped by the mistake when we were too optimistic with a pace note. The mechanics did a great job at midday service to fix the car.”

Looking for a fresh start

Andreas and Anders were similarly caught out in the preceding SS4 (Ässämäki 1), suffering a slow roll after misjudging a pace note.

“It has been a very challenging start,” said Andreas. “We’ve struggled for pace throughout the day. We still have some work to do to get the right feeling but we will aim for a fresh start on Saturday.”

Summarising a tough start to a demanding rally, our Team Principal Michel said: “Rally Finland is one of those events that any rally enthusiast loves. Unfortunately, it seems like the feeling is not mutual for our team. We will keep pushing and supporting our crews to get the best out of our package.”

Eight stages will be held on Saturday over a competitive distance of 142.86km  the longest individual day of the rally.