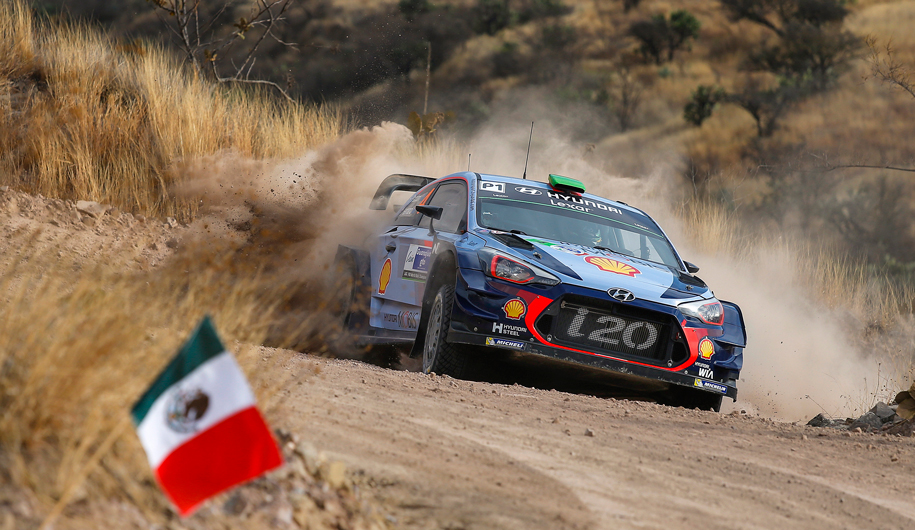 Altitude, heat, punishing gravel terrain: Rally Mexico was always going to be a tough test of the WRC’s newest machinery, including our very own i20 Coupe WRC. And so it proved to be on Friday.

The day got off to a slow start. The planned first runs through El Chocolate and Las Minas stages had to be cancelled after the convoy of WRC cars was delayed coming back from Thursday evening’s Mexico City spectacle.

Despite the shortened itinerary, our crews still faced over 80km of special stages, putting our new car through a baptism of fire.

There were initial signs of promise with Thierry and Nicolas claiming two more stage wins. Unfortunately, all three cars developed engine misfire issues during the evening stages, which cost us a lot of time. Our Belgians were able to hang onto third overall.

“It was a frustrating way to end the day but we have to concentrate on the positives,” said Thierry. “We made it through despite the problems and we are still inside the top-three. This is very important as we look to fight for a podium this weekend. I just hope that’s our bad luck out of the way!”

In the Championship’s first gravel event of the season, we were expecting to work hard, as our new car had never competed on Mexican terrain before.

Our Team Principal Michel explains: “Mexico is an extremely tough rally for new specification rally cars. We can never fully replicate these unique stages when we are testing in Europe so Friday was our first opportunity to put the car through its paces properly in these conditions.”

Hayden and John started the rally in a spirited fashion, with a top-three run through the monster 54.90km El Chocolate. Our Kiwi crew held third overall until engine-related problems in SS6, through the Guanajuato mining tunnels, cost them over one minute of time.

“It’s a very unfortunate situation that we had engine misfire issues across all cars,” said Hayden. “The most important thing is that we made it through and out the other end. Tomorrow’s another day, as the saying goes. We will get on top of it and fight back on Saturday.”

For Dani and Marc, the drama was made worse after disruption during the final stages: “There was some confusion on my first run at the Autódromo when we weren’t allowed to finish the stage,” explains Dani, “We need to understand what happened because from my point of view there was no reason to stop us. It had been a pretty good day up to that point. The car felt competitive, so our aim now is to regain this feeling for the rest of the weekend.”

Saturday will cover 157km over nine stages. Media Luna (27.42km), Lajas de Oro (38.31km) and the classic El Brinco (10.09km) will each be run twice. Lunchtime service will split the two loops, which will then be followed by two more runs at the Autódromo de León. The day’s itinerary will conclude with the Feria de León Street Stage.