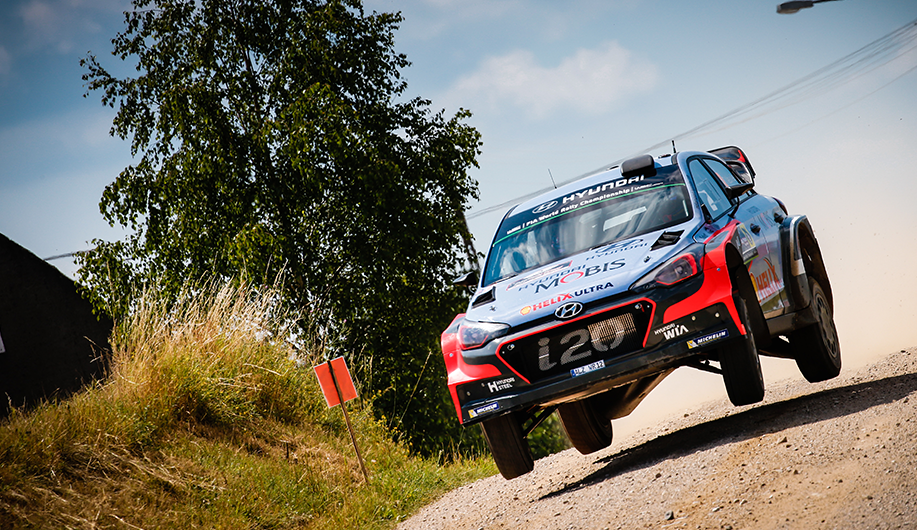 The second half of the 2016 FIA World Rally Championship (WRC) springs into action with Rally Finland.

After three weeks away, everyone is keen to get back onto the stages, including our Team Principal:
“We want to get the second half of the 2016 season started in the same way we finished the first half  on the podium!” Michel said.

Our Alzenau-based team has a best result of fourth in Finland (2015  Thierry), a rally that features some of the fastest and toughest stages on the calendar ­ as well as a daunting array of jumps!

After our two victories (Argentina and Sardinia) and an additional three podiums (Monte Carlo, Sweden and Poland), we want to add more to our results tally.

So naturally, next on the wish list is a maiden Finnish podium.

“We’ve had some decent performances in Finland, but we’ve not yet cracked the top-three – so that’s our target,” explains Michel.

We have a revised driver line-up after Dani was ruled out of the event as a result of an injury sustained in a pre-event testing crash. In his place, Kevin will drive the #20 New Generation i20 WRC, joining Thierry (#3) and Hayden (#4).

All three drivers have been testing in Finland since Friday in a rescheduled pre-event test. We identified the problem that caused Dani’s testing crash and had a trouble-free test. Everyone is feeling confident in our potential to take on the fast and uncompromising Finnish terrain.

“We carried out our rescheduled pre-event testing to finalise our preparations before the rally gets underway,” Michel said. “The PET allowed us to verify the car performance and give the three drivers the chance to fully prepare.”

Thierry and Nicolas are also ready to be back. We recently celebrated their win in Sardinia and close (just 0.8 seconds off the podium) fourth place in Poland.

Celebrations of another kind were happening just after Poland in the Gilsoul household  Nicolas and his partner Cindy welcomed a new addition to their family with baby Myrtie.

“Nicolas and myself have had some positive results recently, so we want to build on that in Finland,” Thierry explained.

“Finland is one of the most challenging rallies of the season. Everybody is always a bit nervous. It’s a very fast event with huge grip and big jumps. You need to get everything 100% right to be fast and not make any mistakes. It’s very enjoyable once you get a good feeling and you are ‘on it’.”

Hayden is looking to capitalise on his and John’s podium from earlier this month in Poland. The Kiwis often draw comparisons between Finland’s roads with rallies in their native New Zealand.

“It’s like the home of rallying, the Monaco Grand Prix of the World Rally Championship,” says Hayden said. “I think Finland is the one we always look forward to the most. It’s a rally I aspire to win one day! The Scandinavians on home turf are very fast so we’ll have our work cut out for us. We’re feeling up for the challenge.”

Two firsts for Kevin and Seb

For Kevin and Seb, Finland will be their third WRC event of the season after Portugal and Sardinia. However, it will be their first rally in the New Generation i20 WRC  AND their first time in a WRC car on the fastest roads in the championship!

“I want to wish Dani a speedy recovery and thank Hyundai Motorsport for this opportunity,” Kevin said.

“The plan for us will be to continue to gain as much experience as possible and get more acquainted with the New Generation i20 WRC. We’re obviously really excited for it, but we know that it’s a tall order. Rally Finland has such an amazing atmosphere! We had a few days of pre-event testing, which went well and I cannot wait to tackle the amazing stages.”

A town fit for rally royalty

Based once again in the popular university town of Jyväskylä and centred at the Paviljonki service park, Rally Finland features 24 special stages covering a competitive distance of 333.60km. The action starts on Thursday evening with the Harju street stage in Jyväskylä and continues throughout the weekend with new routes and two stages unseen since 1999 and 1994.

Friday’s stages are situated west towards Keuruu and include classic forest challenges Mökkiperä and Jukojärvi. Two passes through the world-famous Ouninpohja await on Saturday as well as Päijälä (23.50km) and short 4.23km blasts though Saalahti, one of several sprint tests introduced to help break up long liaison sections. Sunday’s line-up south east of the rally base will be unfamiliar to everyone having not been used this millennium!