Day 1: Thierry and Nicolas top the timesheets by 28s 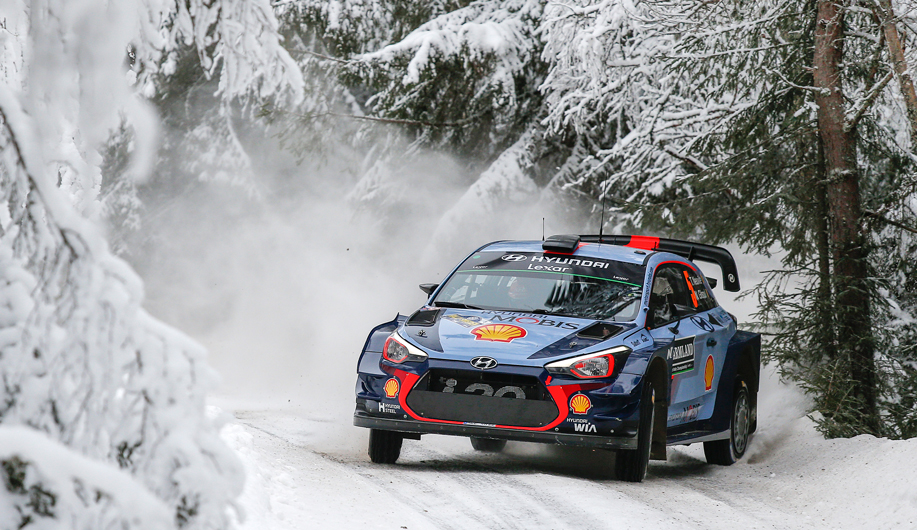 Day 1: Thierry and Nicolas top the timesheets by 28s

Against a perfect snowy backdrop, Rally Sweden began its first complete day of action on Friday morning with our three crews raring to go.

Fresh from a Super Special Stage at the Karlstad trotting track on Thursday evening, held in front of a crowd of passionate fans, it was all systems go for the first full loop of the rally.

Our Belgians Thierry and Nicolas wasted no time getting back to the speed they showed during the season-opener at Monte-Carlo in January. The #5 crew claimed victory in the opening two stages  the classic Röjden and the all-new Hof-Finnskog – that crossed over the Norwegian border.

Despite an initial close battle for the lead of the rally with the Toyota of Jari-Matti Latvala, it was in the afternoon loop where our Belgians showed their real potential. They added three more stage wins in succession and built up a lead of 28 seconds  despite the door of their car coming open on the final run!

“It’s been a good day’s work for us,” said Thierry. “To lead the rally by such a margin is obviously very encouraging, but we’re not getting carried away. My door kept opening slightly on the final stage, which was a distraction, but otherwise the car has been working very well.”

Hayden and John had a tough morning but a detailed discussion at lunchtime helped them get to grips with Sweden’s fast and furious terrain. After finishing second at this event last season, they plan to make up ground on Saturday.

“I’m not going to lie, it’s not been the start we wanted,” admitted Hayden. “Things were not coming very naturally. I sat down with my engineer at service and he suggested some changes. That really helped. I had more confidence and felt that I was driving the car, not the other way around.”

In the #6 Hyundai i20 Coupe WRC, Dani and Marc also endured some difficulties. A missed hairpin in SS4 (the morning’s 24.88km Svullrya test) saw them lose 20 seconds of time and drop to seventh place.

Dani said: “We had a good morning loop, generally speaking. The car was working well and I enjoyed the stages a lot. I just got distracted in SS4 and we lost a lot of time recovering. I couldn’t get back into the rhythm after that.”

We finished on the Swedish podium in 2015 with Thierry and Nicolas, and again last season with Hayden and John, so there’s plenty of hope to make it three in a row by Sunday. But it’s never guaranteed, as our Team Principal Michel warns:  “We have been successful in Sweden in recent years. After the performance we showed in Monte, we had hopes of fighting at the front. With ten stages still to run, we’ve got a long way to go, and lots more work to do,” he said.

Those remaining stages get underway on Saturday morning with a repeat loop that includes the 31.6km run at Knon, a 15.87km test at Hagfors and the famous Vargåsen. Why famous? Because it contains the legendary Colin’s Crest jump, for which we won the award for longest jump in 2014 and 2015!