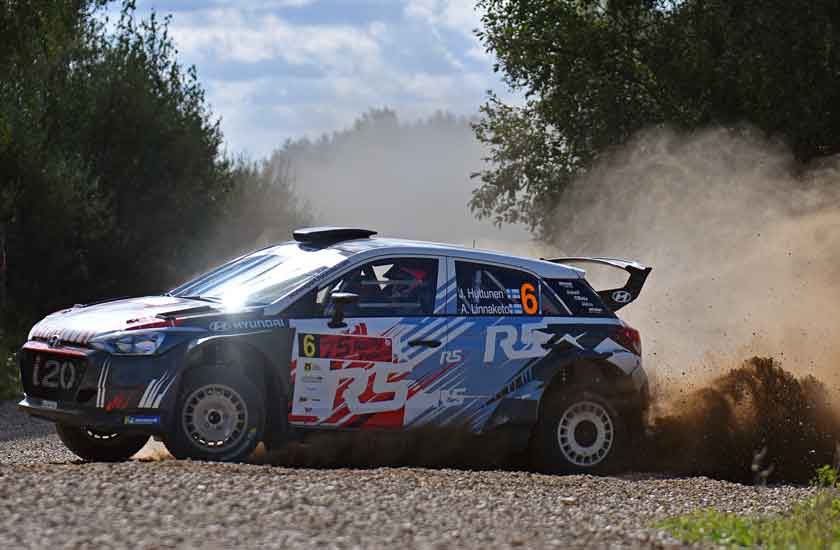 Lining up alongside ERC regulars, they were quick to establish their front-running credentials in the i20 R5. The crew secured seven fastest stage times over the weekend, and was involved in a thrilling battle for victory.

“I really enjoyed Rally Poland, and the speed that I showed in the Hyundai i20 R5,” said Jari. “The roads were fast, but very different in how you had to drive them compared to any rally I’ve done this season so far.”

The event began with a qualifying stage and super special at the Mikolajki Arena before taking in eight timed tests on Saturday and a further six on Sunday. From a competitive start on the opening day, the Finns gained in confidence with each stage.

The crew and team worked closely together to make changes to improve the set-up of the car throughout Saturday’s itinerary. Their effort was rewarded with two stages to close the gap to the overall leader to just 11 seconds.

Sunday’s 100km schedule started with another top time, and consistent runs through the remainder of the morning loop left them within striking distance. However, a puncture at the start of the repeat loop forced the crew to make changes on the road section, which in turn made them late to check in at the following stage. Despite incurring a ten-second penalty, Jari persevered to win the final stages comfortably to finish just eight seconds from winner Gryazin.

“Second place is a great result,” added Jari. “We can take the positives from the weekend to our next start. The battle with Gryazin was really fun. For every stage I was on maximum attack, which is where I learn the most about the car and get the most out the weekend.”

“Jari showed very strong pace throughout Rally Poland,” commented our Team Manager Alain. “He and Antti were quick and consistent among the more experienced crews on the entry list. They worked well with the team to make sure they had their i20 R5 running to the top of its performance. Through the whole rally, and especially amid the challenges of the final loop, they showed great professionalism, and were rewarded with stage wins and a strong overall result.”

Our HMDP crew’s season continues with a return to the WRC2 class at Wales Rally GB at the start of October.