5.9s from the leader at the end of day one 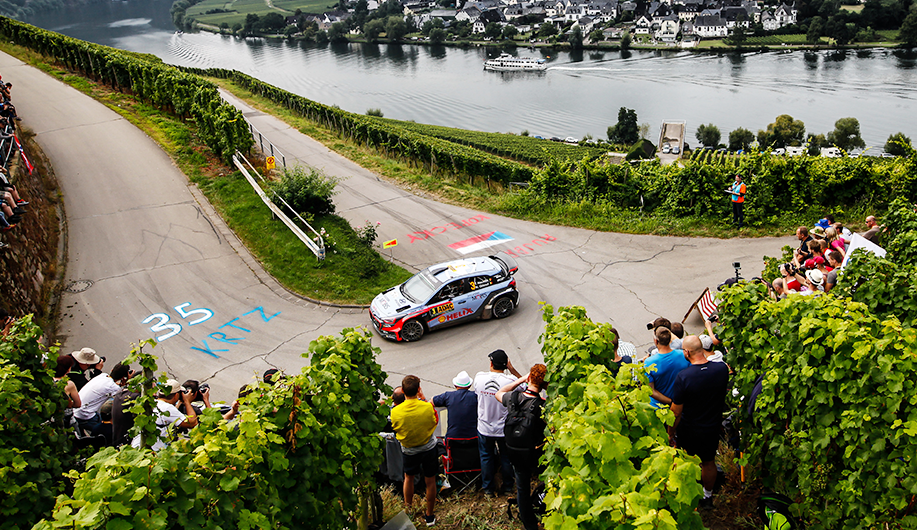 5.9s from the leader at the end of day one

The picturesque Mosel River provided a stunning backdrop as Rally Germany, the ninth round of this year’s World Rally Championship, got underway on Friday.

Our New Generation i20 WRC cars are definitely looking good, even under cloudy skies, as we take part in the first tarmac rally of the 2016 season.

Of course, Rally Germany is very much a home rally with our factory based in Alzenau just a two-hour drive to the east of the Trier service park. And what a fantastic rally it is! From lush vineyards to military roads, our drivers will face a unique set of challenges this weekend as we look to get back onto the podium.

“This is a special rally for our team,” admits our Team Principal Michel Nandan. “That doesn’t mean we are taking things for granted; we know how challenging these stages can be. It’s the first proper tarmac rally for New Generation i20 WRC so we have been validating the work we carried out with the car in pre-event testing.”

Thierry in the Mix

Our Belgian crew were among the quickest driver crews on the opening day.

“We have plenty to be encouraged by after this first day in Germany. In SS4, I cut a bit too much in a very tight hairpin, spun the car and had to reverse. That cost about five seconds. Overall I think we are in good shape and in the fight,” Thierry concluded.

Dani is back in the cockpit of the #4 New Generation i20 WRC after being forced to sit out Finland through injury. Returning with co-driver Marc for Germany, Dani was quickly up to speed.

Our Spaniards finished Friday 12.7 off the overall lead pace, putting themselves in strong contention for a debut podium of 2016.

“I think we have had a very nice start to this rally here in Germany. We tried to push but always being cautious because it’s easy to make a small mistake. We are well placed at the end of the first day but tomorrow will be a decisive day with the Panzerplatte stages,” said Dani.

Hayden and co-driver John will be looking to fight back when they return to action for Saturday’s stages. After a difficult Friday for the Kiwi crew, tomorrow’s Panzerplatte tests, run on the Baumholder military roads, will offer a chance to reclaim some lost ground.

Hayden took to Twitter to sum up his day, “Well that was a lively day, but when you are learning to drive fast on tarmac, you have the test the limits!”

Michel is also quick to acknowledge how easily things can change on the German stages. “I have been encouraged to see where we are compared to our rivals today. But things can change in an instant  for better or worse. We’ll stay focused and our drivers will have to treat each stage with the respect they deserve.”

While we are on the subject of respect, we definitely appreciate the extra ‘home’ support we’re receiving in Rally Germany.

To celebrate our home rally, we have also been running a unique contest on our Instagram and Twitter accounts, offering you the chance to show us your support.

If you are attending this weekend and would like to show us just how passionate you are about WRC and Hyundai Motorsport, find out more by visiting our website: http://bit.ly/1KQB6tS. Don’t forget to use the hashtag#HyundaiFanPower.