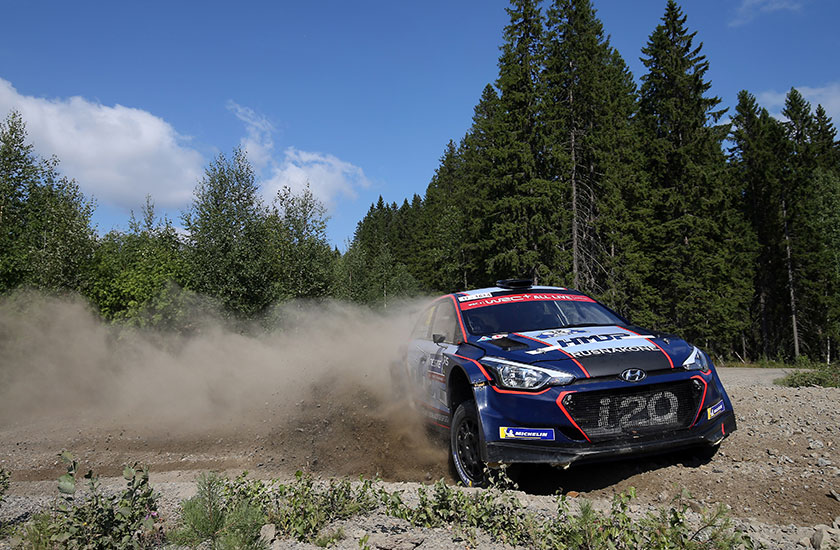 Our HMDP crew Jari and Antti have registered their best result of the 2018 season, finishing second in the WRC2 class in their home event, Rally Finland.

In their fourth WRC2 event of the year in our i20 R5, our Finnish crew enjoyed a consistent and competitive weekend. They registered six top-three stage times and were in podium contention from the outset of the rally, an event they won twelve months ago.

“I am delighted to score a podium here in Finland, my home event, with the Hyundai i20 R5,” said Jari. “To compete at home in front of such great crowds gives me a very special feeling so it’s fantastic to get my best WRC2 result of the season here.

Following Thursday evening’s short opening stage, Harju, the HMDP duo picked up the pace when the rally got underway in earnest on Friday. Moving up to third midway through the afternoon loop, Jari was on pace with WRC2 pacesetter Kalle Rovanperä as he ended the day in a provisional podium position.

Our Hyundai i20 R5 continued to set good rhythm, keeping the crew firmly in the hunt on Saturday. Late drama for WRC2 leader Rovanperä saw the HMDP pair move up into second, where they ended the day.

With a focus on completing the event, rather than setting the fastest stage times, the crew concluded a strong rally on Sunday with a well-deserved podium.

“We have had no problems throughout the complete weekend,” said Jari. “This has been important. We have missed a bit of speed compared to the front-runners but we have been consistent.”

Our Team Manager Alain was full of praise: “Jari and Antti have completed a very intelligent and competitive weekend. They set themselves high targets but have demonstrated huge progress in terms of rally management.

“They didn’t take any foolish risks, and were able to come away with a well-deserved second place in one of the most competitive WRC2 fields we’ve seen. All in all, this rally has been the biggest, most impressive step that Jari and Antti have made in their time as an HMDP crew, and we congratulate them both on a job well done!”

The HMDP crew will return to the Hyundai i20 R5 for our home event, Rallye Deutschland, from 16-19 August, their first tarmac WRC2 event of the season.

2018 FIA WRC 2 Championship for Drivers’ Standings
After round 8