Hyundai i30 N TCR grabs attention at the Nürburgring 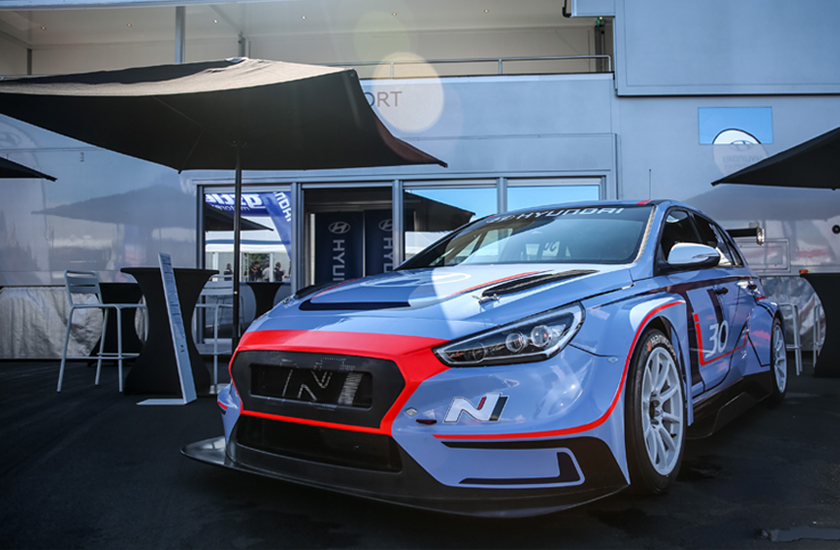 The Hyundai i30 N TCR was a centre of attention at the Nürburgring last weekend, as it went on display for the first time at national TCR series event.

The development version of the car sat in pride of place in the ADAC TCR Germany paddock at the famous circuit. Hyundai Motorsport, together with partner team BRC Racing will continue to test and hone the i30 N TCR in the coming months.

Following July’s extended test session during the Misano 24H, the opportunity to showcase the i30 N TCR at the Nürburgring continued to build the interest in the car from potential customers. Hyundai Motorsport’s first project intended specifically for track racing, the i30 N TCR attracted plenty of attention during the weekend, the fifth of seven events in this year’s ADAC TCR Germany championship. The series has grown into one of the biggest championships run to the regulations, with nearly 40 drivers on the grid for the two 30-minute races. As well as fans, drivers and teams alike were eager speak to the Hyundai Motorsport staff at the event to learn more about the newest TCR car on the market as they begin to plan for the start of their 2018 campaigns.

As well as revised bodywork, validated by the team at their most recent test at the Slovakiaring, the i30 N TCR also carried a fresh colour scheme for the first time over the weekend.  The brand new livery promoted Hyundai’s new N line-up of high performance road cars. The design brought together the N logo and Hyundai Motorsport’s traditional palette of Sky Blue, with highlights of Active Red and darker ‘Hyundai’ Blue. The Sky Blue that formed the base of the livery is also a core part of the identity of the N line-up, with the ‘Performance Blue’ available on the i30 N paying tribute to the liveries of Hyundai Motorsport’s WRC entries.

The racecar was shown alongside the New Generation i30 on which it is based, as well as the i30 N, which was launched less than a month ago as the first model from the N line-up. Designed to be equally at home on the road and the race track the i30 N underwent a significant amount of its testing at the Hyundai Test Centre, which lies just outside of the Nürburgring circuit. The N name carried by both the road and TCR design is partly inspired by the track, together with Namyang in Korea, home to Hyundai’s global R&D Centre. The N logo represents a chicane – the ultimate corner, challenging for both the race drivers of the i30 N TCR, and those at the wheel of the i30 N.

Hyundai Motorsport Customer Racing department manager Andrea Adamo said: “This weekend was another milestone for the i30 N TCR project. This car is specifically designed to be sold to, and raced by, customers so it is crucial that we allowed it to be seen at an important TCR event as we move into circuit racing for the first time. The ADAC TCR Germany series was the perfect championship for us to do this. The category has been very successful, with huge grids and high-profile entrants. It was very good to see that many of these current teams and drivers were interested to take a closer look at the i30 N TCR and learn more about what Hyundai Motorsport Customer Racing can offer in the next few months as they assess their options for racing in 2018.”

After beginning testing with the i30 N TCR in April, Hyundai Motorsport Customer Racing are on schedule to deliver the first i30 N TCR to customers in early December.