The Hyundai Motorsport team has completed the penultimate day of action at Rallye Monte-Carlo with both cars fighting for a top five finish. 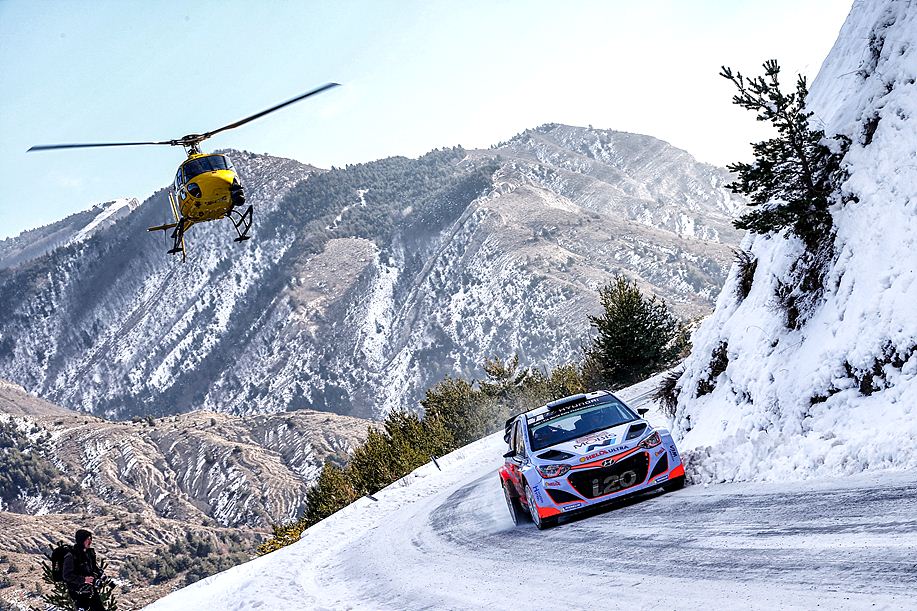 The Hyundai Motorsport team has completed the penultimate day of action at Rallye Monte-Carlo with both cars fighting for a top five finish.

January 24, 2015  Hyundai Motorsport has continued to pick up the pace on the third day of competition at this year’s Rallye Monte-Carlo, the opening event of the 2014 FIA World Rally Championship (WRC), with both Hyundai i20 WRC cars fighting for a top five finish.

Just four seconds separates the two Hyundai Shell World Rally Team drivers at the end of the penultimate day with both crews showing promising performances on today’s three very demanding stages. Saturday morning’s opening stage (SS9 Prunieres-Embrun – 19.93km) was cancelled due to the number of avid fans on the stage, so the first action of the morning was the 51.70km Lardier et Valenca-Faye stage (SS10), which set the tone for the rest of Saturday.

Dani Sordo and Marc Martí were able to make their way into the top six at the conclusion of SS10 after setting the fifth fastest time despite a small off for the Spaniard in the final part of the tough stage. A solid run through Prunieres-Embrun (SS11) was followed by another top five stage time in SS12 (Sisteron-Thoard  36.85km), in which tyre choice was again decisive.

Sordo said: “We’ve had quite an encouraging day and I am pleased to be in the top five overall. It hasn’t been a completely straightforward day, but then there is no such thing at Monte-Carlo! The long stage this morning was really nice and apart from a small mistake we could finish in the top five. This afternoon was also challenging with mixed conditions but went ok. In the final stage, we probably should have used studded tyres instead of the snow because it was very slippery. It was not too bad and we can now look forward to the final day and the objective of finishing in the top five, which would be a good result for us in the first rally of the new season.”

Thierry Neuville and his compatriot co-driver Nicolas Gilsoul continued to acclimatise to the demanding aspects of Monte-Carlo as he extended his most competitive run in this rally. The #7 crew will start the final day from sixth place overall after a good performance in SS12 this afternoon, in which they claimed the third fastest stage time on studded tyres mixed with super softs. It was another positive day for the Belgian crew.

Neuville said: “I have actually enjoyed today and I have built up a lot more confidence in these very difficult conditions. We have had another day where tyre choice has been very important and I think we have mastered this quite well. The first stage this morning was very long and we went perhaps a bit too hard with our tyre choice so we had to exercise caution in the icy conditions. In the afternoon, we improved and the final stage was our best of the rally so far. The car was exactly like I wanted it with a good balance and it was a great result. The end is in sight but we have three more stages left and we must keep up this progress right up to the finish of the rally.”

Hyundai Motorsport heads into the final day with Sordo holding a top five position overall and Neuville right behind. The result is in stark contrast to twelve months ago so the team is keen not only to get both cars to the finish but to maximise any opportunities to further improve in the final classification. The team moves to Monaco for the final three stages  SS13 and SS15 Power Stage (Col St. Jean  St. Laurent  10.16km) either side of SS14 (La Bollène Vésubie  Sospel  31.66km).

Team Principal Michel Nandan said: “Everything is still going to plan and we are pleased to reach the end of Saturday with no problems on either of the Hyundai i20 WRCs. Both drivers have had another clean day in the face of difficult tyre choices and complicated, changeable conditions. We have not had the benefit of much previous Monte data or experience so we have learned a lot today and demonstrated good improvements during the day. To have both Thierry and Dani in the top five in the final stage today, and both in the top six overall is quite positive. We have to remain focussed in the last three stages and to get both cars to the finish. It’s not out of the question to have our two crews finish in the top five so that’s what we will aim for.”