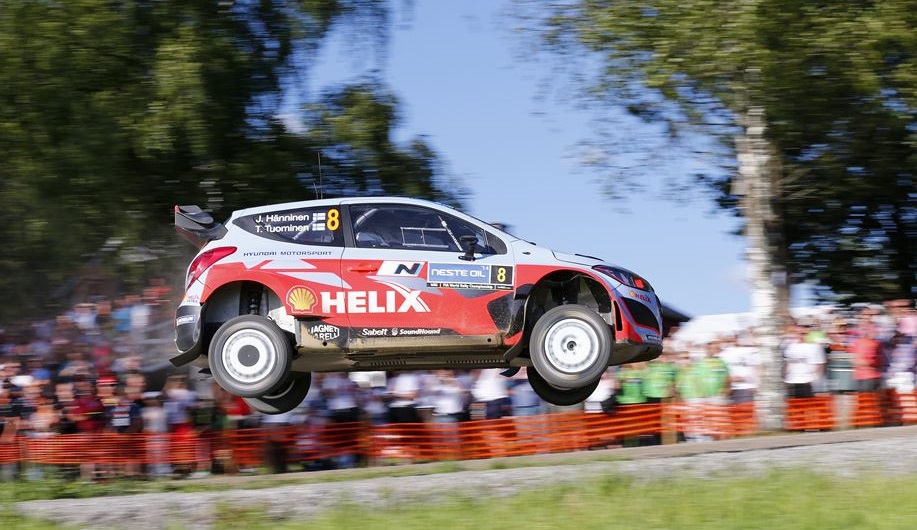 Hyundai Motorsport will start with three cars at the ultra-fast Rally Finland, the eighth round of the 2015 WRC

July 24, 2015 – Hyundai Motorsport hopes to continue its recent run of competitive form after the WRC’s the short summer break at Rally Finland next week. The eighth round of the season will pick up where Rally Poland left off with high-speed roads requiring precision and commitment from the drivers. Coupled with Finland’s famous jumps, the rally is highly anticipated by teams, drivers and fans alike.

Hyundai Motorsport will return to a three-car entry after a successful performance in Poland where all four Hyundai i20 WRC cars finished the event, with two in the top six. The team is now aiming to get enough points to move back into second place in the Manufacturers’ Championship.

“Rally Finland is another high speed rally with a lot of surprises and technical stages,” said Team Principal Michel Nandan. “The only difference from Poland is that we will have more jumps in Finland, which makes a stronger impression on drivers and spectators. We had a good run in Poland and there were some real positives to our performance level. Hayden will be confident in his driving after his recent successes, as will Thierry while Dani also hopes to return to form.”

Thierry’s third place in Sardinia and top-six in Poland has prepared him well for one of his favourite events. “Finland is definitely one of the highlights of the season for me: first of all, because it’s so fast!” said the Belgian. “It is also enjoyable because there are so many jumps. The car seems to spend as much time in the air as it does on the ground. I hope we can continue to pick up the pace and find a good, consistent rhythm.”

Misfortune in recent rallies has hampered Dani’s efforts – something he hopes to change next weekend. “Finland is a great event,” Spaniard Dani explained. “You need to have a lot of confidence in your pace notes because of hidden crests through the corners and you must hit them all at the right speed. I hope our luck changes and we can get back to scoring some good results.”

One of the standout performers in the last two WRC rounds, Hayden is very familiar with the Finnish terrain. The rally will also be the 50th WRC start for Hayden’s co-driver John Kennard’s and will also mark the 30th anniversary of his WRC career which began at this event in 1985.

“It is probably one of my favourite events of the year,” said New Zealander Hayden. “There are lots of very fast sections and jumps, similar to New Zealand. John did his first WRC rally before I was even born! Now, he lives there with his wife so it’s a special place. Hopefully we can make it even more so with a good result next weekend.”

Rally Finland features smooth gravel roads alongside picturesque forests and lakes. It is based in the university town of Jyväskylä and the route is similar to 2014, but with a new Harju street stage to start on Thursday evening. Friday will feature almost half of the rally’s competitive distance with no mid-day service and will see a return to the 34km Ouninpohja stage, widely regarded as the ultimate test of bravery and commitment in rallying. Saturday and Sunday feature further classic Finland tests.