Thierry Neuville wins the East Belgian Rally as he continues to prepare for the upcoming Rallye de France-Alsace. 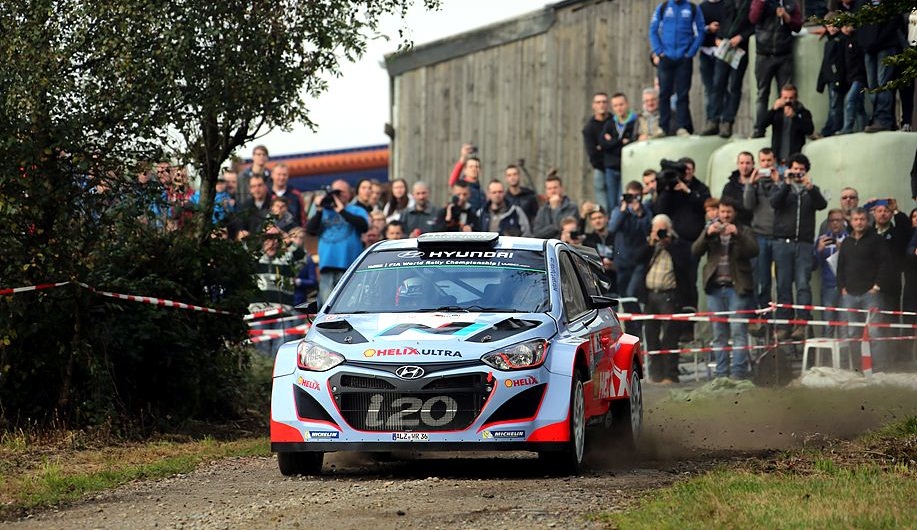 Thierry Neuville wins the East Belgian Rally as he continues to prepare for the upcoming Rallye de France-Alsace.

September 28, 2014  The Belgian pairing of Thierry Neuville and Nicolas Gilsoul continued the development of the Hyundai i20 WRC on asphalt yesterday at the East Belgian Rally, taking a win in the dry conditions on the roads around Sankt-Vith, in the province of Liège. After a trouble-free start, the duo took a commanding lead on stage1 and kept it throughout the day.

Based in the Ardennes region, the one-day East Belgian Rally was contested over 13 special stages totalling 156,36km. With variable conditions expected at Rallye de France-Alsace next week, the Alzenau-based team was keen to gather as much experience as possible on similar surfaces in order to fine tune settings ahead of the final all-tarmac event of the WRC season. After recent asphalt tests in the Vosges region of France in mixed conditions, particular focus this weekend was on assessing the brakes, suspension, transmission and engine maps of the latest Hyundai i20 WRC.

Team Manager Alain Penasse commented: “Our objective here was to prepare for Rallye de France next week and we have concluded a very successful day with the bonus of a win after testing a number of solutions for the upcoming WRC event. We are still in our first year of competition and the East Belgian Rally has given us the opportunity to refine our tarmac set-up on the challenging roads of the Ardennes which I am sure will help us at the Strasbourg-based event next week. Thierry has again shown his speed and we feel we now have all the information we need to head to the Alsace in the best possible shape.”

Neuville and Gilsoul relished the opportunity to prepare for the next WRC event in front of their home crowd as they aim to put in another strong performance with the Hyundai i20 WRC.

Neuville said: “Winning my home rally is a very nice feeling. We came here to continue the development of the car in front of my home crowd who have provided us with a very warm welcome. We have we been able to test a number of solutions ahead of Rallye de France and a win on our local event is a real boost to the team as we head to Strasbourg for a rally that already has positive memories from previous outings. The house where I grew up is down the road, so I know the stages here. It helped me to get quickly into a fast pace, and to focus on fine tuning the set-up.”