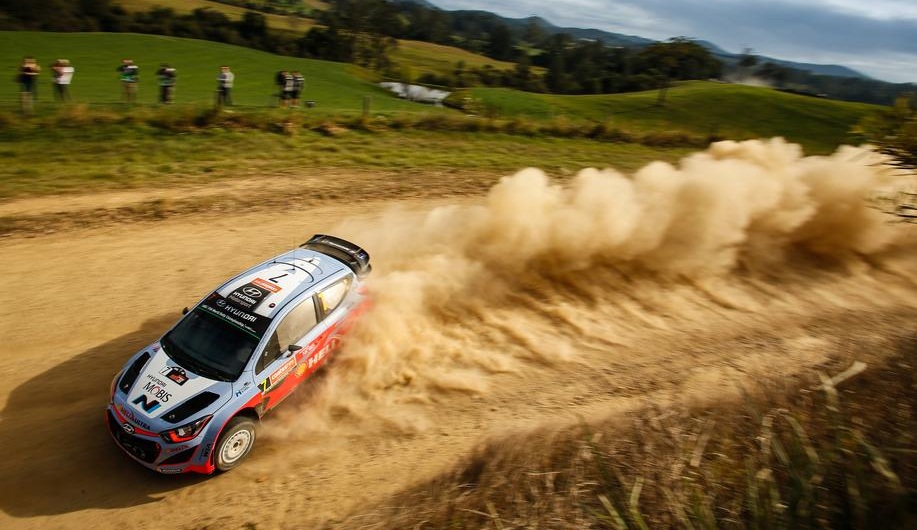 September 12, 2015  The second day of this weekend’s Rally Australia saw our team take two more stage wins. The day ended well, with all three Hyundai i20 WRCs inside the top-eight overall after two runs through the 50km Nambucca stage as well as the day and night Valla stage.

Hayden Paddon was impressive in the morning loop, winning stages nine and ten to close the gap between behind the rally leader. Thierry Neuville also made improvements, taking third place in the night stage and finishing seventh overall. He was six seconds ahead of Dani Sordo, who finished his first Coffs Harbour Saturday run in eighth.

Hayden sits in fifth overall and is in contention for another top-five finish this weekend. After today’s attacking driving, he is only 19.4 seconds behind the rally leader.

“I’m pretty happy with how today has gone,” said the young Kiwi. “I felt much more comfortable and confident in the car this morning and we resolved the issues we had yesterday afternoon. We made some set-up changes and I have been able to drive the way I like. The second loop wasn’t ideal because we wore down the tyres too much in the long Nambucca stage and lost around 10 seconds in the last 20km. Still, it’s been a good day. We’re fifth overall and, though it will be hard to catch the leaders on outright pace, we’ll try to keep the pressure on.”

Thierry has continued to make improvements throughout the rally. He put in a good drive today, claiming third place on the Valla night stage, and held onto seventh in the overall standings.

“I struggled a bit this morning with the conditions,” said the Belgian, “as we were still cleaning the road. In the first long stage we were keeping up the pace of the cars in front until midway through, where we lost about ten seconds in a poor section. We regained the rhythm for the end and were able to push harder in the second stage. We made some changes to the car over lunchtime to improve balance, particularly on the twisty parts, and had a stronger afternoon. Conditions on the final stage were difficult but we made it through and kept hold of seventh. There are a lot of kilometres to run tomorrow so we will keep fighting as hard as we can to defend our position.”

Dani ran today’s stages for the first time and quickly got up to speed with the terrain. Brake issues troubled him in the morning loop but he remains inside the top-eight after a solid afternoon.

“It has been another day of learning for me,” said the Spaniard. “I have never completed these stages before. The long Nambucca stage was very demanding since we had a problem with the rear brakes, which lost us a bit of time. In the afternoon, the car felt better and we had no problems. The night stage was hard because of the dust and I was disappointed to lose so much time. We knew it would be a tougher day for us so we have to be reasonably satisfied. We now look forward to tomorrow and will see if we can make up any positions.”

We will look to have all three cars finish the rally and pick up maximum manufacturer points to defend our second place in the Championship. There are five stages left and still plenty to play for as anything can happen.

“Overall, it’s been a satisfying day,” said Team Principal Michel Nandan. “Although we only had four stages, they have been very demanding and have tested all aspects of the car and driver combination. Hayden had a fantastic morning loop with two stage wins, which was great to see and helped him reduce the gap to the leaders considerably. His afternoon was not as straightforward but he is still in a great position heading into the final day. Thierry fought hard, as usual, and defended his position on the overall classification. Dani continued to learn about the Australian stages and has approached the rally with real professionalism. I am sure there is more to come from all three drivers tomorrow, and, as a team, we will ensure the Hyundai i20 WRCs are as competitive as they can be for the final five stages.”

The final five stages will be held on Sunday  they include two runs each of the Bucca Long and Wedding Bells stages, and a single run of Settles Road.