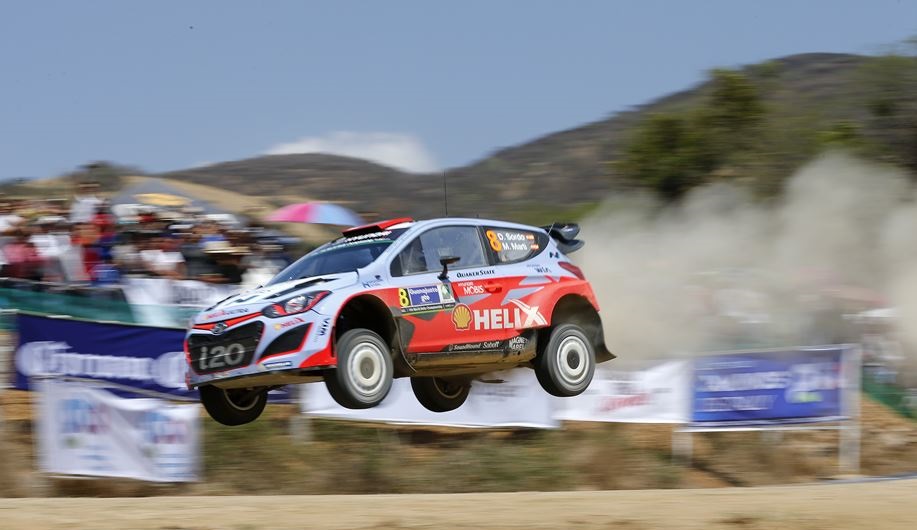 March 7, 2015  The Hyundai Motorsport team remain in contention for a top five finish in this weekend’s demanding Rally Mexico  round three of the 2015 FIA World Rally Championship (WRC)  with Dani Sordo on the penultimate day.

All three Hyundai i20 WRC cars are still in the running despite the driver crews facing different issues throughout Saturday’s eight stages. The team worked tremendously hard to ensure both Thierry Neuville and Hayden Paddon could join Sordo for Saturday’s stages after both cars were forced to retire on Friday.

Sordo (#8 Hyundai i20 WRC) set a positive pace on Saturday’s morning loop with top-four times in all four stages, including a stage win in the 11.07km El Brinco stage. The Spaniard experienced a gearbox problem which necessitated changing at lunchtime service but a front-left puncture in SS15 meant for a cautious approach to the final stages. Nonetheless, Sordo and co-driver Marc Martí are still in the hunt for a top-five finish.

Sordo said: “This morning, things went well and I was very happy. Our road position was good and I was pleased with the performance of the car. We lost the brakes a bit at the end of the opening stage of the day but we still set the fourth time so it wasn’t so bad. We were also able to set the fastest stage time in SS13 after a good run but we also experienced some gearbox issues which manifested themselves during the morning. The team changed our gearbox over lunchtime service but in the first stage of the afternoon loop, we hit a stone which caused a puncture and lost us a lot of time. I had one spare soft tyre with me but to cover almost 60km so I adopted a cautious approach. It was an unfortunate end to what had been a very positive day, but we are still 5th overall and we will look to consolidate this position on Sunday.”

Thierry Neuville (#7 Hyundai i20 WRC) put the disappointment of Friday behind him with a series of strong performances in Saturday’s stages. Twice on the podium in Mexico, Neuville and co-driver Nicolas Gilsoul pushed hard on the penultimate day to reclaim lost time and positions, showcasing his ability around Mexico’s unforgiving stages and the performance potential of the Hyundai i20 WRC car.

Neuville said: “First of all, I would like to thank the team for their fantastic work in repairing our #7 Hyundai i20 WRC following our roll yesterday. They worked very professionally to fix the car to allow us to restart today. It has been a good day, generally, and things have gone well. We have been able to demonstrate a similar pace to yesterday, although our road position has not been as favourable. We had a big push again today and have found a decent rhythm but incurring a 21 minute penalty means it is hard to make up too many positions. We’ll keep fighting, as we always do.”

Hayden Paddon (#20 Hyundai i20 WRC) and co-driver John Kennard had the misfortunate of being first on the road on Saturday’s eight stages, which put the Kiwi crew at a disadvantage from the outset. Paddon also experienced a loss of power due to the high temperatures in the afternoon loop which prevented him from pushing too hard. Still, he made it to the end of Saturday with no issues and will now seek to finish his first Rally Mexico on a high tomorrow.

Paddon said: “It was a difficult morning as first on the road, but that was completely as we expected after yesterday. I was pleased to have the chance to re-join under Rally 2 because yesterday’s incident was such a small error which happened to have big consequences on our rally. We had to be patient today and accept that things would be tricky. We used today effectively as a test and to learn more about the nuances of this event. It’s not been easy but it has certainly been valuable. We were planning on pushing a bit more this afternoon but we experienced some loss of power the so we had to take things carefully to make it to the end. We hope to be able to push a bit more in tomorrow’s final stages.”

The Hyundai Motorsport mechanics showed their determination and professionalism on Friday evening after both Neuville and Paddon were forced to retire prematurely. The team fixed both cars in the required time to allow all three Hyundai i20 WRCs to take the start on Saturday. Another disrupted day has kept the team on its toes but a top five position gives optimism for the final day of this incident-filled rally.

Team Principal Michel Nandan said: “It’s been another hit and miss day for the Hyundai Motorsport team with some very positive performances as well as some disappointment along the way. This is very typical of Rally Mexico which can often be a rollercoaster of emotion. Dani started the day strongly by setting some impressive stages times, including a stage win in SS13. This allowed him to reduce the gap to fourth place. We had to change his gearbox over lunchtime service but then he hit trouble in SS15 when he had a front left puncture which lost a lot of time. Carrying just one spare tyre he had to take a steady approach to the final stages. We take comfort from the fact he is still in the top-five but it’s been a mixed day overall. Thierry had a good day after the team worked tirelessly to fix his car for today’s stages. He showed why he is so strong here in Mexico, setting good times and making up positions. Unfortunately, Hayden had a tough day, thanks in no small part to his position as first on the road. He also reported some loss of power due to the high temperatures in the afternoon loop, which we will need to look into. That said, he has acquitted himself very professionally and has used today’s stages as a valuable learning exercise. We hope all three drivers will be able to push fully in the final stages tomorrow.”

Sunday will take in three stages  the monster 55.82km Guanajuatito stage, which could prove decisive in the final rally result, the 10.54km Derramadero stage and the rally finale  El Brinco 3  where Power Stage points will be up for grabs.