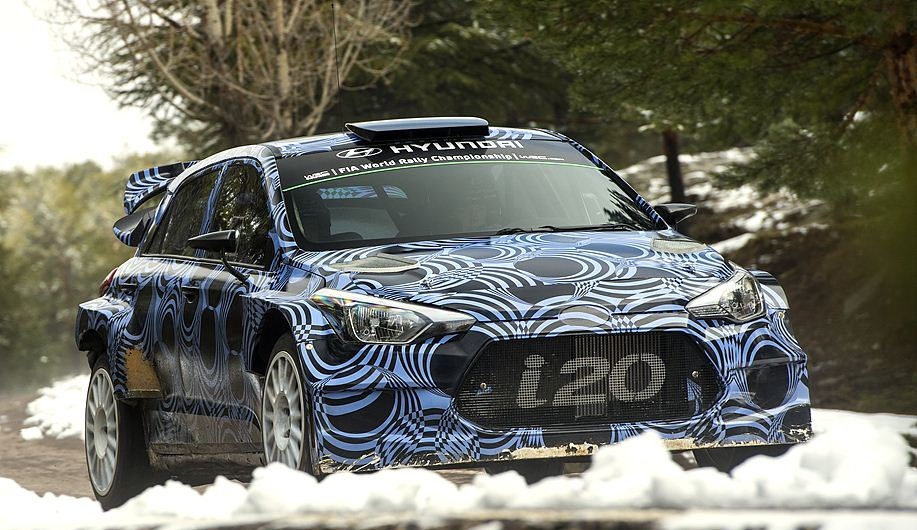 April 10, 2015  The Hyundai Motorsport team has recently completed a four-day test of the New Generation i20 WRC car in the Spanish region of Almeria. The test marked the next important phase of development for the car, which will make its debut in the 2016 FIA World Rally Championship.
The team’s test driver Kevin Abbring and his co-driver Sebastian Marshall were at the wheel of the New Generation i20 WRC together with Thierry Neuville and Nicolas Gilsoul. Work focused on engine and chassis development, as well as altitude testing with the latest iteration of the car, which has been upgraded compared to the version used in previous tests.

In addition, a series of further upgrades will be introduced to the current Hyundai i20 WRCs in the remaining rallies of 2015 in a bid to help the team fight for podiums regularly in only its second season in the competitive World Rally Championship.

Team Principal Michel Nandan commented: “We had a very detailed week of testing planned in Spain recently, as we put an upgraded version of our New Generation i20 WRC through its paces in the Almeria region. Kevin and Thierry worked on engine and chassis development, as well as altitude tests, which will help us to further develop the car as we move through 2015. We had hoped to introduce the new car later this season but unfortunately an issue with the homologation schedule – related to production of the three-door road version  will delay our programme. We have therefore opted to continue focus on the five-door version of the New Generation i20 WRC which will compete at Rallye Monte-Carlo next year. This revised schedule gives us extra time to ensure the car is where we want it to be performance-wise. At the same time, the current Hyundai i20 WRC will undergo a number of important updates which we hope will keep us in the fight for podiums this season.”