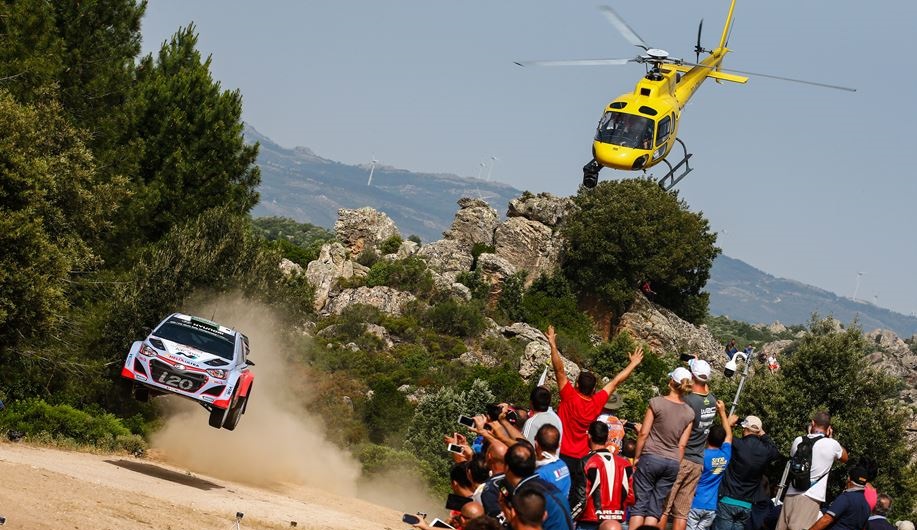 June 13, 2015  Our team has maintained its impressive performance after today’s stages of the Rally Italia Sardegna, one of the longest and most demanding legs of the entire championship.

The day was not trouble-free however as all three drivers had problems, although the team heads into the final day with one car holding a strong second place and another car comfortably inside the top four in the standings.

Hayden Paddon started this morning as the leader of the rally and did not let go of his position easily. He set a string of top-three times across the five morning stages, increasing his lead over Sebastian Ogier to 9.3 seconds by lunchtime service. The afternoon loop was tougher with Hayden experiencing a spin in SS17 and then a broken gearbox mounting. He finished the day in second place and a debut podium is still within his sights.

“We expected today to be tougher,” said the young Kiwi. “But I didn’t expect such a dramatic end. The car felt good and we made the most of our starting position but we lost the lead when we had a spin in SS17. We then started to have gearbox problems but persevered and made it through to hold onto second place. Tomorrow we’ll look to secure the podium result, which would be amazing. It’s not over yet, so we have to keep focused.”

Thierry Neuville had a challenging day yesterday but set out to improve today. He signalled his intentions with a second place in SS11 but encountered power steering issues in the following stage. The problem was fixed but he received a 40 second penalty for arriving late to SS13. Our mechanics worked hard during lunchtime service and Thierry responded with an excellent stage win in SS16. It was our fourth of the weekend.

“It’s not been easy but we have some positive things to take away for sure,” said the Belgian. “We started well but had a problem with the steering. We were able to fix it but incurred a penalty. The team did a fantastic job to get the car sorted for the afternoon and it was nice to repay them with a stage win. Four stages left tomorrow  who knows what might happen.”

Dani Sordo started the day under Rally 2 following problems yesterday and looked to be resuming his strong form until a fuel leak forced them to retire. He will once again use Rally 2 to start on tomorrow’s final stages.

“We started the day with a good feeling in the car,” said the Spaniard. “We only managed to complete two stages properly because we had a problem with low fuel pressure. We couldn’t keep the car going once we finished SS13. It’s a shame to have had to retire. We will look to finish on a positive note tomorrow.”

We are still in the hunt for a second podium finish of the 2015 season. With another stage win today and top-five potential shown by all three cars the team is buoyed by the performance of the car in Sardinia.

“That was an intense day of rallying,” said Team Principal Michel Nandan. “Ultimately, it was another positive one for our team. We have Hayden in second place and Thierry in fourth place. The biggest disappointment was Dani having to retire with low fuel pressure. It is frustrating given the pace he has shown this weekend. The drivers have given everything  Thierry took a stage win this afternoon. Although he had a mechanical problem but that hasn’t affected his position. He has made up places and now sits fourth going into the final day. Hayden had another great day and continues to impress. He kept Ogier at bay until lunchtime, keeping a level head to secure a hard-earned second place. We won’t become complacent and will do all we can to keep these positions.”

Just four stages remain on Sunday, with two 11km stages repeated. The Cala Flumini run will also act as the Power Stage and bring the sixth round of the World Rally Championship to a conclusion.