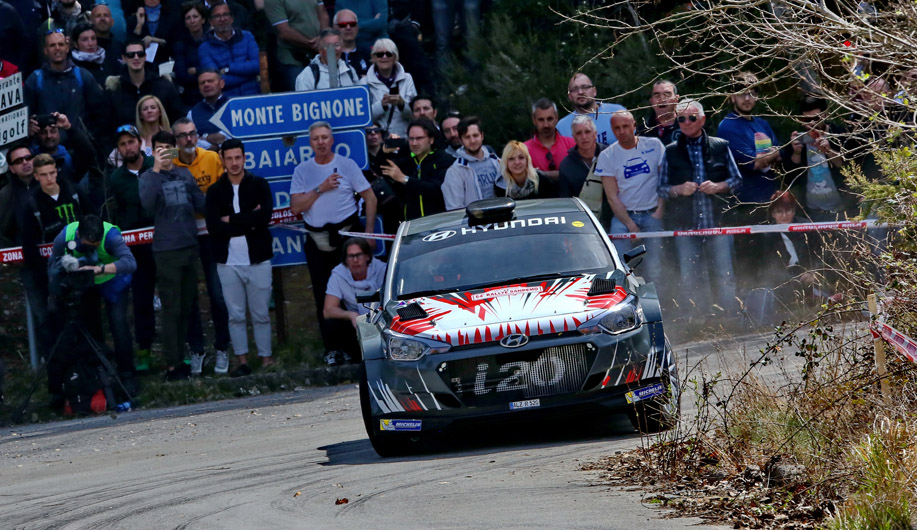 Rallye Sanremo was arguably the toughest challenge yet for Hyundai Motorsport Development Driver Chewon Lim. However, he appeared equal to it, initially running in the top ten overall before his weekend was cut short by an electrical problem.

The twisting, technical stages of the Italian event were unlike anything the South Korean driver had faced in his rallying career before. Demanding precise pacenotes Chewon worked closely with his Belgian co-driver Martijn Wydaeghe in preparation for the weekend, as the pair continued to build their partnership. They were also able to work with Hyundai Motorsport WRC driver Hayden Paddon, who was also entered in the event. However, both of the crews would be at a disadvantage to the regular crews of the Italian national championship who could draw on years of experience on the Sanremo stages.

Still following the opening trio of stages on Friday afternoon Lim and his Belgian co-driver Martijn Wydaeghe were running in ninth position, setting very strong times. The performance was especially impressive, considering the weekend in Italy was only their third time competing together in the New Generation i20 R5 with the support of the Hyundai Motorsport Driver Development Program.

A minor mistake on the fourth stage, the last of the opening loop, would damage their car’s right-rear suspension and drop them away from the front of the rally. However, they were able to return to service without collecting any penalties.

When the competition restarted in the darkness of Friday night the rally presented another test for Chewon and Martijn. At 33km the Mini Ronde stage was the longest the pair had faced in their career together  let alone tackled in the dark. Unfortunately, in the hills above Sanremo a pair of punctures conspired to take them out of the contention for a top result.

Immediately the team’s focus became returning Chewon to the rally for Saturday, adding to his experience in the car on the demanding roads. After working late into the night the team were able to wave Chewon out of service, towards the first of five stages on the day. However, on the first road section the crew became aware of an electrical problem, which they were unable to trace the cause of. Opting to avoid potential further damage to the car the team made the difficult decision to retire Chewon and Martijn from the rally.

Lim said: “When we were recceing for the rally we knew it would be tough event. The stages were great, but different from anything I’ve driven on before, really tough and technical. Martijn and I had to work closely together to make precise pacenotes. This is something we are always working on, but for Rallye Sanremo the stages made it hugely important. Our performance when we started was exactly what we wanted, especially up against such a competitive field. Unfortunately we had some problems which took us out of the rally. It’s really disappointing, not only to retire and miss out on getting more time at the wheel of the New Generation i20 R5, but to not have the chance to drive on some the best stages I’ve seen so far.”

Hyundai Motorsport Team Manager Alain Penasse said: “Rallye Sanremo was a new challenge for Chewon in his young rallying career, and we knew it would be tough event for many reasons. Happily, with his preparations in making pacenotes, and in his performance on the early stages he showed what he was capable of. He was able to compete with the much more experience crews on his first start at the event. Unfortunately the result his progress deserved didn’t come. Sadly the technical problems also limited his time in the car, which is still really important at this early point in the season. However, we are very happy with the progress Chewon has showed so far, and with his work both around the rally weekends and during his time at the Hyundai Motorsport workshop which we are sure will be rewarded with strong results in future events.”