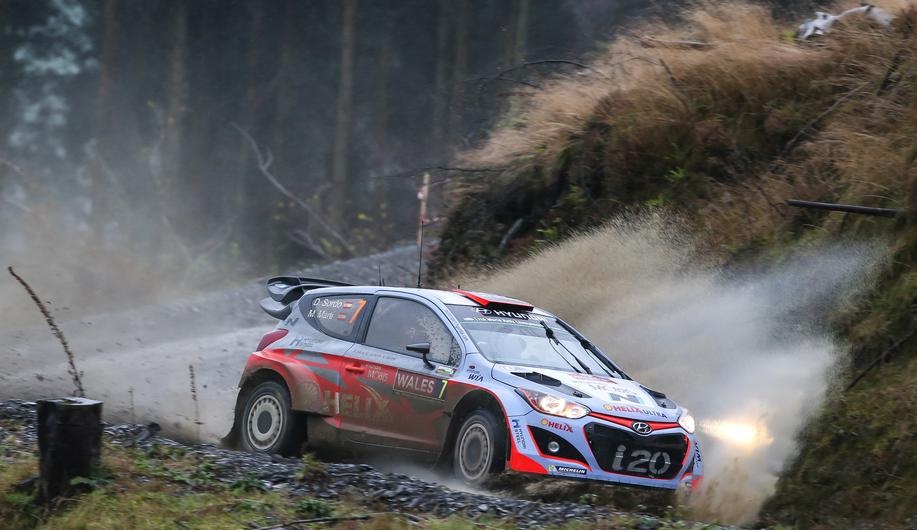 November 15, 2015  The Hyundai Motorsport team has finished its second WRC season at Wales Rally GB with two of our drivers in the top five.

We tried hard to claim second in the Manufacturers’ Championship after a season long battle. In the end the result was not enough and we finished in third place overall, just six point behind Citroën.

Dani drove with determination after difficulties yesterday and a steady Sunday meant he could reclaim fourth place. It is his second consecutive top-four result after achieving a podium finish in his native Spain.

“We have had a good weekend overall and I am quite happy with our performance here in Wales.” said the Spaniard. “Of course, we are disappointed not to have taken second in the Championship for the team but we could not have done any more. These Welsh stages are tough so we should be satisfied with how we’ve tackled the event. We didn’t want to take too many risks this morning but we knew that we had to control the pace and to be ready to capitalise if there were any issues. In the end, we were able to take fourth place and we should be pleased with that. We have had a positive second season and we would like to thank the team for all their hard work. The podium in Spain was a highlight, for sure, but I’ve enjoyed this weekend in Wales and we now look forward to next season.”

“It’s been a difficult weekend but we got a good top-five result at the end,” said the Kiwi. “We knew heading into this final day that it would be difficult to take second place off Citroën and so it proved to be. I think we can be satisfied to have finished the season on a charge. These Welsh stages have been hard to read in terms of the grip levels and we’ve worked hard to improve from one day to the next. It’s been another valuable weekend and brings to an end a positive season for us. The podium in Sardinia was definitely a standout moment. We’d have liked a few more results like that but we’ve built good momentum during the year, which we will take forward to 2016. Thanks to everyone at Hyundai Motorsport for a job very well done this season.”

Our team has improved greatly throughout our second WRC season, building on firm foundations from last year. We have shown consistency by remaining competitive throughout, challenging for second place in the Manufacturers’ Championship right up to the end of the year.

“That was definitely an eventful rally,” commented Team Principal Michel Nandan, “and one which epitomises the challenge, excitement and unpredictability that the WRC offers fans around the world. Wales Rally GB is always tough and this weekend has reminded us just how challenging it can be. So, to finish in fourth and fifth is a highly commendable result. It wasn’t enough to overhaul Citroën in the classification but we did our best and fought until the end. For our second season in WRC against more experienced rivals, I think we can be pleased with what we have achieved. We have scored four podiums in three rallies and have finished in the top-five in all but one event. For me, this shows an improvement in our performance level and consistency. We have taken more stage wins this season and competed closer to the front-runners, while also approaching each rally with more self-belief and aggression. I’d like to thank the entire team and our drivers for their efforts throughout the season, and to all the Hyundai supporters around the world. The countdown to the 2016 season starts now!”