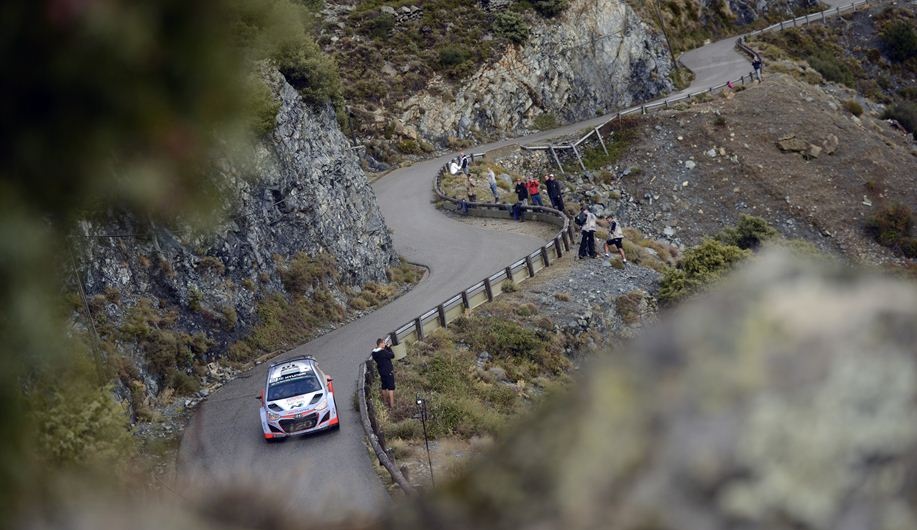 With damage to the road after heavy rain, Stage 4, the first of the day, was cancelled. Drivers followed a shortened itinerary of just two stages with a repeat of Francardo-Sermano for SS5 and the 48.46km Muracciole-Col de Sorba.

Kevin started the day in second overall after an impressive Friday run. He continued his promising performance today, ending the day in fifth position with just three Sunday stages to go.

“To be challenging for a top-five result in Corsica in only my second rally on tarmac is pleasing,” said the young Dutchman, “even if it has not been a straight-forward day for us. This morning, we opted to run hard compound tyres but unfortunately, on the drier parts of the stage when we could have found an advantage, we picked up a puncture and could not push. We found conditions to be a lot drier in the afternoon stage but I was a bit disappointed with our time. We could have been more aggressive with the car set-up for those conditions but we are learning all the time. Looking at the positives, we are fifth overall so tomorrow we will do all we can to keep that.”

Hayden has driven well given his relative inexperience on tarmac. He learned a lot in the morning’s slippery conditions and on the drier roads of the afternoon stage and he now sits seventh overall.

“We had better conditions today,” said the Kiwi. “Although it was still slippery in places, our confidence was much higher. We made the wrong tyre choice in the morning stage, expecting it to be drier, but the time was still OK. This afternoon, it was a nice proper tarmac stage so I focused on my driving rather than the pace notes. I felt that my driving was better but we weren’t following the notes as close so there was room for improvement. It’s been another valuable day of learning and we will continue to build on this tomorrow.”

Dani also climbed the rankings after a damaged rim slowed him yesterday. He was the fastest of our team on both stages today, claiming two top-five stage times. He now sits just outside the top-ten.

“We faced tough conditions again this morning,” commented the Spaniard. “Very muddy and slippery, but this afternoon was better. There were still tricky parts but we were able to find confidence to push more. The times on both stages today were not bad and we have made up some positions on the overall classification. We could have been higher without our problem yesterday afternoon but this is rallying. We will now concentrate on tomorrow to see how much more ground we can make up. The car has been performing well and we have shown good competitiveness so far, so from that point of view we can be pretty satisfied.”

After breaking his suspension early yesterday, Thierry returned under Rally 2 today with a time penalty. He enjoyed two clean runs despite being first out on the roads in the wet conditions.

“It has been a better day after yesterday’s difficulties,” said the Belgian. “The first stage this morning was very slippery, which was particularly bad for us going first on the road. I took it carefully to get through safely  I was maybe a bit too steady. We used the lunchtime break to check pace notes and we improved in the afternoon stage. We had a bit of understeer but the conditions were better. The car has generally been running well today so our focus now is on getting decent runs in tomorrow’s three stages to see what we can do to make up positions.”

Tour de Corse is the third event this year that we have entered four cars. There have been challenges but our first time at the Corsica event is going well, with two cars in contention for top-five spots.

“This has been one of the most unpredictable rallies of the season,” commented Team Principal Michel Nandan. “We have faced tricky conditions on all stages, as well as another cancelled stage today, so we have had to react to changing circumstances. We are pleased to have all four cars make it through Saturday unscathed and to see Kevin and Hayden in strong positions overall. Dani and Thierry have also fought hard to recover positions after yesterday. We saw different tyre choices this morning but with similar results from our drivers. A solid, trouble-free afternoon stage allows us to prepare calmly for tomorrow, which contains two very long stages. Anything can happen and, based on this rally so far, we have to be prepared for that.”