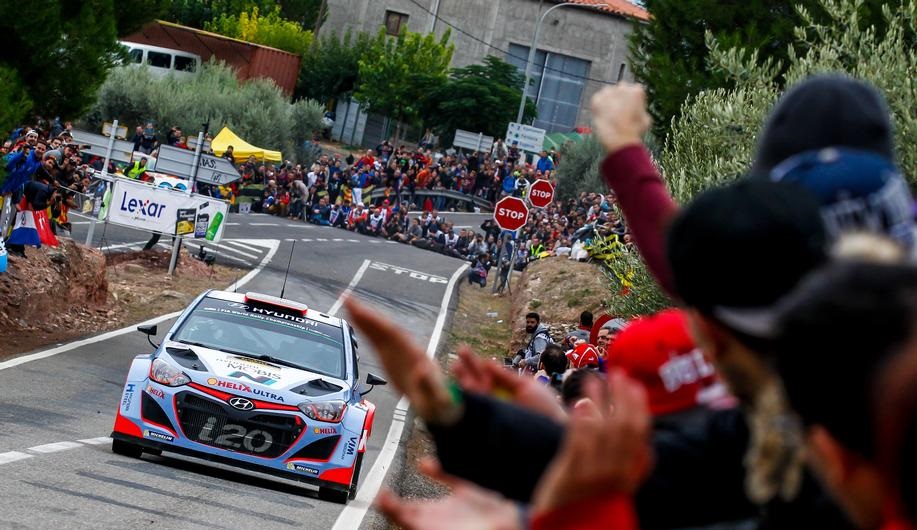 October 24, 2015  Our team has had a strong second day at Rally de España, penultimate round of the 2015 WRC season. Today’s itinerary featured eight tarmac stages, following yesterday’s mix of gravel and tarmac.

Dani Sordo finished the day in fourth place, the highest placed of our team drivers. Thierry Neuville climbed the ranks into seventh, holding the same time as Hayden Paddon who sits eighth overall.

Dani took the energy of his local fans and used it to set some impressive times with multiple top-five stage times, which saw him run as high as second overall midway through the day. He is within reach of the podium as we go into the final day.

“We had a good feeling with the car today,” said the Spaniard, “and pushed as hard as we could. We tried to take the fight to those in front and have shown we are here for the podium. We benefited a bit from others’ misfortune earlier to take second place but we knew it would be hard to defend from the VWs. Still, we made improvements and gave everything. We head into the final day well within reach of a podium. With six stages left, we have every chance of achieving that. We’ll certainly try!”

Thierry continued to improve from yesterday, building confidence in his car and claiming a joint stage win in SS17 to finish the day in seventh overall.

“I am really pleased with the progress,” declared the Belgian. “We struggled on the opening two stages but set the fourth fastest time in SS12, which gave us encouragement. We were cautious on the final morning stage but made some changes to the pace notes for the afternoon loop and stiffened the car set-up to give more lateral grip. It was a move in the right direction and gave a much better balance from the car. I’m happy with what we achieved today and will push in the final stages tomorrow.”

Hayden was troubled by two punctures today that lost him time in his push for the top-five. He lost 20 seconds in SS10 and more in SS15, but remains focused.

“We had an OK day in places,” admitted the Kiwi. “Had it not been for two separate punctures, things might look very different on the classification. It was frustrating to lose 20 seconds on the opening stage but it was my mistake. I cut a corner and hit a rock. We were lucky to get away with it. We set some good times other than those issues and have shown a decent improvement compared to last year. We were perhaps overdriving in places so we’ll reset tonight and see what we can salvage tomorrow.”

Our push for second in the Manufacturers’ Championship will continue tomorrow on the final day of Rally de España. The drivers’ battles for second and fifth will be fierce and there is everything still to play for.

“We have seen another close-fought day with eight tarmac stages,” said Team Principal Michel Nandan. “Congratulations to our mechanics in preparing the cars for tarmac specification last night  it was another job well done and great to watch them take centre stage. The drivers have shown good performances again today. Dani continues to put pressure on the podium contenders and he is pushing hard for a top three result in front of his home fans. Thierry, too, has made real strides after improving his set-up. It was good to see his joint stage win at the end of the day. His confidence is much better as we prepare for tomorrow. Hayden had a harder day with two punctures but has shown resilience to retain a top-eight place. All three drivers are motivated to push tomorrow  I’m sure we’ll see lots of action up and down the classification.”