Two of our drivers fighting for top-five at the end of Rally Poland Day One. 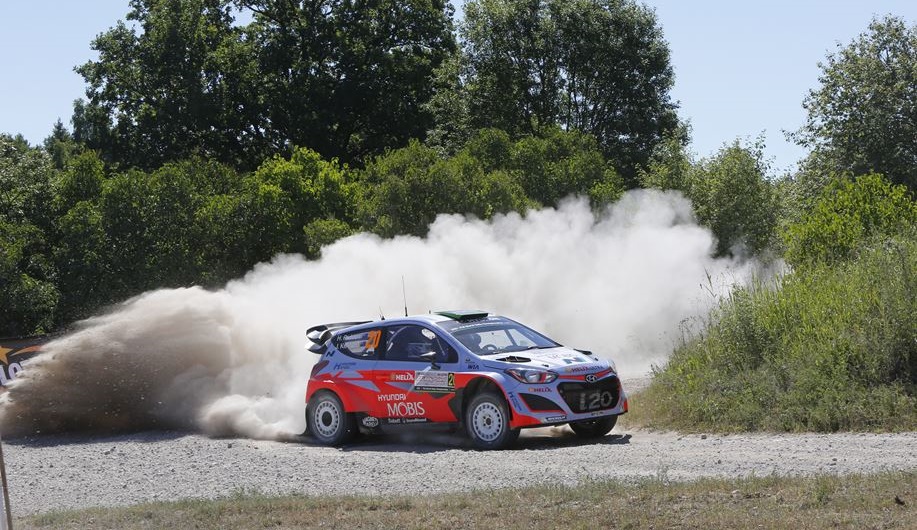 Two of our drivers fighting for top-five at the end of Rally Poland Day One.

July 3, 2015  The team has had a trouble-free opening day to this weekend’s Rally Poland, round seven of the WRC calendar. It is the first time that Hyundai Motorsport has entered four cars into a rally.

Most of the stages were remodelled for this year’s event so drivers tackled new roads on some of the year’s fastest gravel stages. Thierry Neuville, Dani Sordo and Hayden Paddon were joined by the team’s test driver Kevin Abbring for the first of four rallies to involve the Dutchman.

Following on from his debut podium in Sardinia, Hayden had a strong opening to Rally Poland with multiple top-five stage times throughout the day leaving him fifth overall. “The stages today have been enjoyable and challenging in equal measure,” said the young Kiwi. “We had some better runs in the afternoon with a good tyre choice, particularly the hard tyres on the long stage. It hasn’t been a bad day overall and we are in a close fight for the top five, so we have to keep focus and continue to gain confidence.”

Thierry, who also scored a podium finish in Sardinia, is close behind Hayden after a hard day on the fast Polish stages. “All in all I have been pleased with my driving and the performance of the car,” said the Belgian. “These new-look stages are very fast and we struggled at times with our pace notes like many others did. This afternoon it was very important to manage the tyres. We had a good run in the long stage but lost a bit of time in the penultimate stage. It was acceptable in the circumstances. We are in a close fight and will look to make some more improvements tomorrow.”

Dani did not have the best start to this rally but he made good progress throughout the day to finish just outside the top eight overall. “To be honest, it was not such a good day,” said the Spaniard. “The stages have been fast with a lot of crests, which have been difficult to master with the pace notes. I didn’t have much confidence in the morning, which affected our loop. The afternoon was a bit better but the later stages were all about tyre management. We need to do better tomorrow but we’ll sit down with the team this evening to see what improvements can be made.”

Poland is Kevin’s second WRC event of 2015. There is a lot to learn and it has been a productive first day for him. “It’s been fantastic today with some amazing stages,” said the Dutchman. “The fast nature of the stages is not the easiest for us in our first of four scheduled rallies, but it’s been fun. We improved the pace notes throughout and have worked around brake issues. In the afternoon we were finding improvements but in some sections we could push the car more to its limits. I’m looking forward to tomorrow.”

Our team has managed its first four car entry well, especially with no lunchtime service. We have laid good foundations for the rest of the weekend and hope for more of the same from tomorrow. “This is a special rally for us,” said Team Principal Michel Nandan. “And what a fast rally it is proving to be! These new stages offer some of the most challenging stages of the season with our crews needing to constantly refine their pace notes. All four of our crews worked very well, and it’s good to see Hayden and Thierry in a close fight for the top five. Dani and Kevin, too, have had different targets but it is fantastic to see four cars in our service area. The team has done a commendable job to adapt and it’s a testament to how much we’ve grown as a team in such a short time. I hope we continue in this way tomorrow.”

Saturday’s will see a loop of three stages run twice with an evening Super Special once again to be held in the Mikolajki Arena. There will be 129.29km of stages in total tomorrow, on the final full day of this weekend’s Rally Poland.