Dani Sordo leads the Hyundai Motorsport charge after the first full day of action in this weekends Rally Mexico, securing a top six position overall in the #8 Hyundai i20 WRC 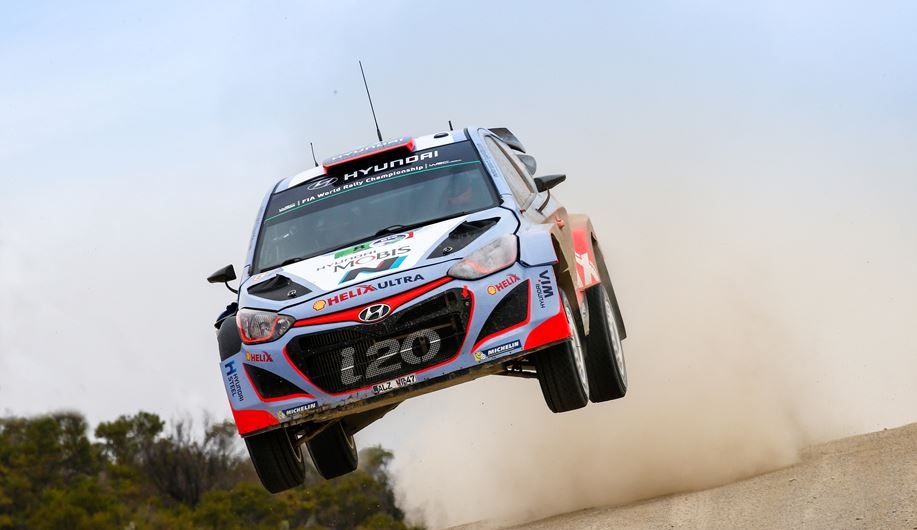 Dani Sordo leads the Hyundai Motorsport charge after the first full day of action in this weekend’s Rally Mexico, securing a top six position overall in the #8 Hyundai i20 WRC

March 6, 2015  The Hyundai Motorsport team has shown impressive pace on the first full day of this weekend’s Rally Mexico with Thierry Neuville (#7 Hyundai i20 WRC) winning two stages (SS1 & SS5) and putting up a strong fight for the overall lead of the rally.

At the end of Friday’s eight stages, however, Dani Sordo and Marc Martí (#8 Hyundai i20 WRC), are the highest placed Hyundai Motorsport crew in sixth place after a solid start to this third FIA World Rally Championship (WRC) event of 2015.

Neither Neuville nor Hayden Paddon (#20 Hyundai i20 WRC) were able to complete Friday’s demanding stages after both suffered damage to their respective cars after incidents during the unforgiving El Chocolate stage.

Sordo will continue to mount a top six charge tomorrow after putting in solid times WRC in his first event with the team after missing Rally Sweden following a training injury. The Spaniard will be the highest classified Hyundai Shell World Rally Team driver heading into Saturday.

Sordo said: “For me, it’s been great to be back with the team here in Mexico and I have had a good day. We have had a few issues but the feeling is good with the car and finishing the first day in the top six is an encouraging start. On the first run of El Chocolate, I had some gearbox issues and then later – after the water splash – my windscreen was misty so visibility was poor. I was pleased with the final morning stage, Las Minas 1, and also with setting the third best time in the repeat Los Mexicanos (SS7) stage. There are a lot of positives to take from today; the car feels good and I feel physically fine but there is another tough day ahead of us tomorrow.”

Neuville had a stellar start to Rally Mexico with a fine stage win in Thursday evening’s opening run, as well as setting an impressive fastest time in Friday morning’s final stage  SS5 Las Minas 1 (15.54km). The Belgian, alongside compatriot Nicolas Gilsoul, was the closest challenger for the lead of the rally throughout Friday, and was setting pace-setting split times, but a puncture led to a roll in the second pass of El Chocolate this afternoon. The team will check the damage on the car and evaluate if the Belgian will be able to re-join Rally Mexico under Rally 2 regulations tomorrow.

Neuville said: “It is a sad end to what has been a very positive day of rally for me, Nicolas and the team. We didn’t expect to go as well today given our second place on the road today but a clever tyre choice as well as a competitive car helped us to compensate. I had a good rhythm and felt good in the car this morning. I had spin in SS4 which lost about ten seconds but then won the following Las Minas stage to mount a fight for the lead of the rally. The afternoon loop started well but towards the end of the repeat El Chocolate stage, I had a puncture and lost control of the car. We rolled and a hole in the radiator prevented us from continuing.”

In his first participation in Rally Mexico, Hayden Paddon (#20 Hyundai i20 WRC) had his first full day of action cut short early on after hitting a rock in the second stage of the day, the gruelling SS4 El Chocolate (44.13km). The Kiwi driver, alongside his Hyundai Mobis World Rally Team co-driver John Kennard, will re-join under Rally 2 on Saturday morning where they aim to continue learning in this uniquely demanding event.

Paddon said: “It was a trying start to our first full day of action here in Mexico. We started the morning quite encouragingly with the seventh best time in SS3. The car felt good, certainly the best it’s ever felt, and I was really starting to get into the groove. We wanted to continue that into the long El Chocolate stage, SS4, but the road was slippery and I made a small mistake about 3km into the stage, into a tight left hander. I lost the rear under braking, sliding wide and hitting a rock. We broke the front upright and unfortunately the part we needed to fix it wasn’t with us, so we had to stop in the stage. It was really a shame because the Hyundai i20 WRC felt very nice to drive. We will re-join tomorrow under Rally 2 but it will be tough being one of the first on the road, so we’ll just focus on learning curve as much as we can.”

For the Hyundai Motorsport team, the performances of all three drivers in the opening ten stages of this gruelling rally, give plenty of cause for optimism. Neuville’s two stage wins, as well as his fight for the overall lead of the rally, suggest that improvements made to the Hyundai i20 WRC have proved beneficial in this high altitude event.

Team Principal Michel Nandan said: “On the one hand, it is easy to be downhearted that we had two cars unable to complete today’s stages, but on the other we must take comfort in the fact that Thierry was once again the closest challenger for the outright rally lead. He has taken two stage wins so far and has consistently been near the front. Unfortunately, he had a puncture near the end of the second El Chocolate stage which put him into a roll. A hole in the radiator meant he couldn’t continue. Hayden, too, had a good start but a mistake in SS4 forced him wide and caused damage to his car that left him unable to complete the stage. Generally, though, the car has performed well today and all three drivers have reported that they have been pleased with their pace. Dani leads our charge at the end of Friday but Hayden will re-join under Rally 2 tomorrow and we hope Thierry will be able to restart as well but we have to evaluate the damage on his car first. We will continue to show what our Hyundai i20 WRC is capable of, and hope that all three drivers can put up a similar level of performance tomorrow.”